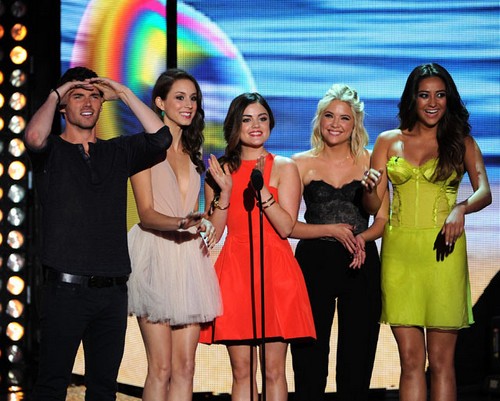 Pretty Little Liars Episode 5 “Miss Me X 100” is set to air on Tuesday July 8th on ABC Family. The all new episode isn’t just any episode though, it’s the 100th episode of Pretty Little Liars, and according to PLL spoilers, it will be packed full of more drama and reveals than we could ever expect. We scoured the Internet and put together a list of “Miss Me X 100” spoilers, enjoy!

According to Episode 5 spoilers, Alison DiLaurentis will make her highly anticipated return to Rosewood High, despite the fact that the liars have begun to question whether they even want their old BFF back at school. Alison puts on a brave face and waltzes into school, determined to make amends with all the kids she bullied before she was “kidnapped.” Unfortunately, every kid that she ever made fun of has already been recruited by Mona’s army and they are all eagerly waiting to dive Alison a dose of her own medicine.

Tyler Blackburn left Pretty Little Liars to star as a frontrunner in the PLL spin-off Ravenswood, after only eight episodes ABC Family axed the supernatural drama. So, the PLL writers are bringing him back to Rosewood. According to PLL spoilers, Caleb Rivers will return to Rosewood during Episode 5. It will be interesting to see how Hanna will react, since she has moved on and is now dating Travis. Caleb never met Alison before the went missing, but according to spoilers he will have a few choice words for her when he does finally meet her.

Executive producer Marlene King dished on the 100th episode of Pretty Little Liars to The Hollywood Reporter. King teased that during Episode 5, “There will be a big reveal. One of the mysteries that we have had for a long time on the show will finally be revealed.” It’s anyone’s guess which mystery she is referring to, considering the heaping pile of unanswered questions that have been keeping fans up at night.

According to the “Miss Me X 100” spoiler video released by ABC Family, Mona and Alison face off, in what looks to be an epic cat fight. In the spoiler video Alison tells Mona, “I made you ‘Loser Mona’ once and I can do it again.” Then the two queen bees begin smacking each other.

We haven’t seen Jenna Marshall since someone hit her over the head and left her for dead in the lake, and Emily saved her. Shanna insisted that Alison was the person out to get Jenna, and the person she was so scared of. Before Aria killed Shanna, she revealed that she had been tormenting the liars to avenge Jenna, and implied that she was in love with her. If Jenna is back in Rosewood, there is a good chance she knows that Aria and the liars killed her girlfriend Shanna, and she probably isn’t too happy about it.