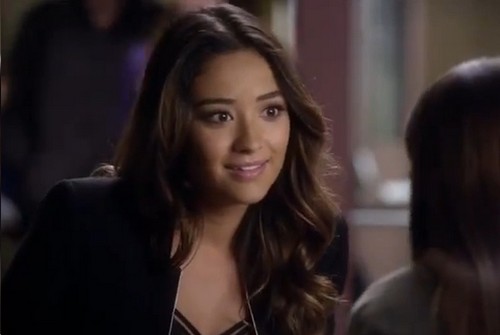 Tonight on the ABC Family PRETTY LITTLE LIARS continues with the 21th episode called, “She’s Come Undone.” On tonight’s episode Aria begins to fall apart after learning of Ezra’s betrayal, and she doesn’t know whom to trust. Meanwhile, Spencer tries to show Toby and her family that she can fight her addiction without going to rehab; and Paige gets fed up with Emily’s secrets.  Did you watch the last episode?  We did and we recapped it here for you.

On last week’s episode Spencer was determined that it was finally time to tell Aria about what she had found out about Ezra, but Emily and Hanna were worried about what it could do to their friend. A wrench was thrown into the plan when Ezra told Aria about his concern and suspicion of Spencer’s recent addiction problem. Now with Spencer’s credibility being questioned, can the girls trust what Spencer has been telling them about Ezra — could this all be a figment of Spencer’s tired brain or really just a clever ploy by Ezra to cover his tracks?

On tonight’s episode Aria grapples with Ezra’s betrayal while Spencer must deal with the fallout from her addiction.  Spencer is determined that it is finally time to tell Aria about what she has found out about Ezra, but Emily and Hanna are worried about what it could do to their friend. A wrench is thrown into the plan when Ezra tells Aria about his concern and suspicion of Spencer’s recent addiction problem. Now with Spencer’s credibility being questioned, can the girls trust what Spencer has been telling them about Ezra — could this all be a figment of Spencer’s tired brain or really just a clever ploy by Ezra to cover his tracks?

Pretty Little Liars Season 4 Episode 21 “She’s Come Undone” opens with Spencer, Hanna, Emily, and Aria discussing Ezra’s book. Aria reveals that Ezra did have a brief relationship with Alison, but he isn’t “A.” Ezra has been trying to put together the pieces and figure out who killed Alison, and he thinks it was one of the liars. Emily is confused, if Ezra has been watching them and researching them for his book, then he had to know about “A,” and he just sat back and watched “A” torture them and didn’t even help them. Aria stays up all night playing back memories of her and Ezra and the first time they met. She jumps out of bed and throws up in the garbage can.

Spencer wakes up the next morning, and finds her Mom and Dad waiting for her in the kitchen. They plan to send her away to a rehab facility in Philadelphia. Spencer insists that she doesn’t have a problem, she begs her parents to give her a chance to quit pills on her own before they send her to rehab. They agree to give her one chance, but she has to take the withdrawal medication.

At school, Hanna approaches Travis and apologizes to him for kissing him. Travis insists that it is fine, but he can’t talk, he has to go to court. His Dad was being blackmailed for something illegal, and since Travis went to the police and got Hanna’s Mom off the hook, they made good on their blackmail threats.

Emily finds Spencer lying on a bench in the hallway. Shanna called Emily last night and told her to drive to Walford and leave Alison’s money in a PO Box. Spencer doesn’t think Emily should go, it may be dangerous. Before they can discuss it anymore, Aria rushes past them and barges into Mr. Fitz’s classroom. The substitute teacher informs her that Mr. Fitz took a leave of absence for a family emergency. Aria is furious, not only is Ezra a liar, he is a coward and didn’t want to have to look her in the face. She bursts into tears, and Emily offers to take her home.

Spencer pays Toby a visit, and apologizes for ruining their date night. Toby isn’t upset about their date, he is upset that she has been hiding her pill problem from him. Spencer promises Toby she is done with the pills.

At school Emily sits down with Paige. She lies to Paige and tells her that she has to “run errands after school and check on Aria because she has having a family emergency.” Paige sees all of Alison’s money in Emily’s purse, and Emily lies and says it was her birthday money.

Aria heads to Ezra’s apartment to confront him, but he isn’t home. She starts going through his closet and finds timelines of her friends from the “A Lair,” a video recording of Alison, and surveillance photos that were taken of her and her friends.

Hanna is at the police station trying to convince Holbrooke not to press charges against Travis’s Dad. She feels guilty that her Mom got off the hook, and because of it Travis’s Dad got arrested.

Aria is still at Ezra’s apartment, having a meltdown. She is destroying every single thing she can find (lamps, files, furniture, photos, etc).

At school Spencer opens her locker and finds a pill bottle, “A” planted it in her locker with a note, “don’t say I never gave you anything.” Hanna is worried because Aria isn’t answering her phone. Hanna, Emily, and Spencer head to Ezra’s house to see if Aria is there. They find her sitting on the floor in the middle of all the broken furniture. Emily and Hanna help Aria out, and Spencer stays behind and grabs as many of Ezra’s files and photos as she can.

Emily heads to the post office and makes the money drop she promised Shanna. Unbeknownst to her someone is watching her form around the corner.

Hanna heads to court to see how Travis’s Dad’s court case went. Apparently she got through to Holbrooke because he vouched for Travis’s Dad and he didn’t get any jail time. Travis thanks Hanna for coming and asks if they can meet up tomorrow and talk.

Spencer is in her bedroom having some serious withdrawals. She takes out the pill bottle that “A” left in her locker, and swallows a handful of pills.

Emily is waiting in line at the Post Office and Paige arrives and confronts her. She knows that Emily is lying, and she thinks “A” is forcing her to send the money. Paige takes the enveloped and threatens to go to the police, Emily caves and admits to Paige that Ali is alive and the money is for her.

Aria is sitting in front of the fire place and ripping out pages of Ezra’s book one by one and burning them. Hanna is trying to comfort her. She reassures Aria that Ezra fooled all of them, not just her.

Emily and Paige sit down and talk about Ali, Paige is shocked to learn that Alison is alive. She doesn’t understand why Emily is helping Alison since she “used and abused” her. Paige thinks Alison is a sick person, and Emily needs to tell her parents she is alive and let her family deal with her. Paige finally promises not to say anything to anyone about Alison being alive, but only if Emily promises to cut off communication to Ali.

Hanna heads to the diner to get some food for her and Aria, and runs into Holbrooke. She thanks him and hugs him, and tries to kiss him but he pulls away. She apologizes, frustrated, and runs out of the diner.

Spencer is reading through Ezra’s files. She finds a note about her. CeCe Drake witnessed Spencer and Alison fighting the night that she died, Spencer picked up a shovel and threatened Alison. CeCe never told the police about the fight she saw because the Mrs. DiLaurentis paid her not to.

Spencer heads downstairs and confronts her Dad. She confesses to him that she can’t remember what happened the night that Alison died, but she thinks her Dad hired the private investigator to follow her and not her sister. She asks her Dad if he thought she killed Alison, and he refuses to answer. Toby knocks on the door and interrupts, Spencer’s Dad tells her to take a walk with him and cool off. Spencer storms out and Toby follows her.

Aria finds a letter folded up in Ezra’s book from a publishing company. She calls the company and asks when the book will be published, and the secretary reveals they haven’t set a date, but Ezra is at their office right now discussing it. Aria hangs up.

Toby barges into Spencer’s kitchen and tells her Dad that Spencer got away from him. Meanwhile Spencer is at Alison’s house talking to her Mom. She asks Mrs. DiLaurentis if she thinks that she killed her daughter Alison? Spencer grabs Mrs. DiLaurentis’s arm and screams at her to tell her the truth, and asks her why she didn’t call the cops on her if she hit Alison with the shovel? Mrs. DiLaurentis tells Spencer to get out, and tells her she doesn’t know what she is talking about.

Hanna finds Aria walking down the sidewalk. She is headed to the principal’s house to tell him all about her inappropriate relationship with Ezra. Hanna reminds her that if she outs their relationship, Ezra will go to jail, and it will be in the newspapers, and her family will be affected. Aria changes her mind at the last minute and heads home. Hanna tries to go with her, but Aria informs her she wants to be left alone and she “doesn’t want her company.”

Emily heads home and Paige follows her. Paige wants them to go out and hang out but Emily turns her down, she informs Paige she doesn’t “like ultimatums.”

Spencer finally returns home and finds her Mom, Dad, and Toby waiting for her in the living-room. She walks past them like a zombie and upstairs to her room.

Emily goes to Aria’s house to check on her but she is packing a bag. She informs Emily she is leaving, and she doesn’t know where she is going, but she needs to get out of here.

Paige leaves a note in a cop car telling them that Alison DiLaurentis is alive, and lists the PO Box that Emily sent the money to.

Spencer curls up in a ball on her bedroom floor and cries. And, the episode ends with an “A” scene, “A” is sitting in a rocking chair and reading the pages of Ezra’s books.