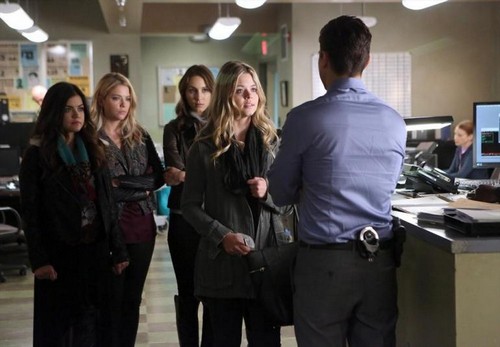 Pretty Little Liars Season 5 is officially under way, and Episode 2 “Whirly Girl” is scheduled to air on ABC Family on Tuesday June 17th. PLL spoilers have already emerged for the all new episode, and it looks like “Whirly Girl” will be packed full of drama and shocking revelations. If you missed the premiere episode of Pretty Little Liars then click here for our live recap.

According to Pretty Little Liars spoilers, Alison DiLaurentis and the rest of the liars will leave New York City and head back to Rosewood. For those of you who don’t remember, during the Season 4 finale someone threw the lifeless body of Mrs. DiLaurentis in to a shallow grave and buried her while the girls were in NYC.

When Alison returns she will take up residence in the DiLaurentis house with her brother Jason and father Kenneth. It won’t take long before it is discovered Mrs. Dilaurentis is MIA, and Jason and Kenneth will begin search efforts. Meanwhile, Alison will be questioning her father and brother’s loyalty, and their involvement in her mother’s disappearance.

Alison won’t be the only one having trouble adjusting to life back in Rosewood. A traumatized Aria Montgomery will try to deal with the near-death of Ezra Fitz and the murder of Shana. Regardless of whether Shana was “A” and intended to hurt her and her friends, Aria can’t come to terms with the fact that she murdered their nemesis.

Pretty Little Liars spoiler videos also tease that Mona Vanderwal is up to her old tricks. In the promo for “Whirly Girl” Mona can be seen threatening Alison and telling her, “You’re going to wish you stayed dead.”

So PLL fans, do you think that Mrs DiLaurentis is really dead? Or did she pull an Alison and climb out of her grave after her assailant left? If she is dead, who do you think killed her and buried her? Share your Pretty Little Liars theories in the comment section below and don’t forget to check CDL for all of your PLL spoilers and recaps.