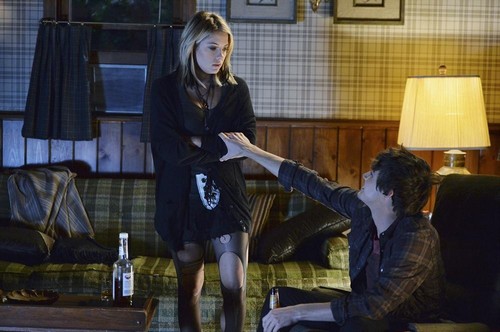 Pretty Little Liars continues to be one of the my favorite series, on tonight’s episode the liars learn that Alison is up to something when they see her sneaking through Spencer’s yard in the dark, and Hanna confesses to Sidney that she and the liars were in New York City the night that Shanna was murdered.  If you are like me and you are anxiously awaiting each episode, we have managed to get our hands on a sneak peek video and some spoilers to whet your appetite for next week’s episode 8 called “Scream for Me.”

On tonight’s episode, Aria began her volunteer work at Radley and quickly got down to business finding any answers she could about a patient of interest to the Liars. But she quickly hit a snag when she came across an aggressive patient that might be the key to what the Liars were looking for. Also searching for answers, Spencer took a note from Ezra’s play book by borrowing some of his spy equipment to keep a closer eye on the home front.  Meanwhile, Hanna was caught at odds when Ali and Caleb butted heads, and Emily sought help from her friends when her mom invited Ali over for dinner.  And lots more happened — did you watch the episode? If you missed it we have a full and detailed recap, right here for you.

Spoiler alert: If you’re one of those people who doesn’t like spoilers, stop reading now! We have some juicy spoilers for you about the season 5 episode 8 of ABC Family’s “Pretty Little Liars.”

Official ABC Family synopsis of next week’s episode: “Hanna’s insecurities and current situation continue to plague her when Alison moves into the Marin house while her Dad is out of town. Now forced to live with the one person she is trying to avoid, Hanna retreats further into abusing alcohol and ends up in a sticky situation.”

On next week’s episode Alison moves in with Hanna, which pushes Hanna further down a dark path.  Meanwhile, Aria drops the ball on her maid of honor duties when Ella returns to town to plan her wedding and Spencer and Emily pursue a dangerous lead, trying to solve the mystery of the dead girl in Alison’s grave.