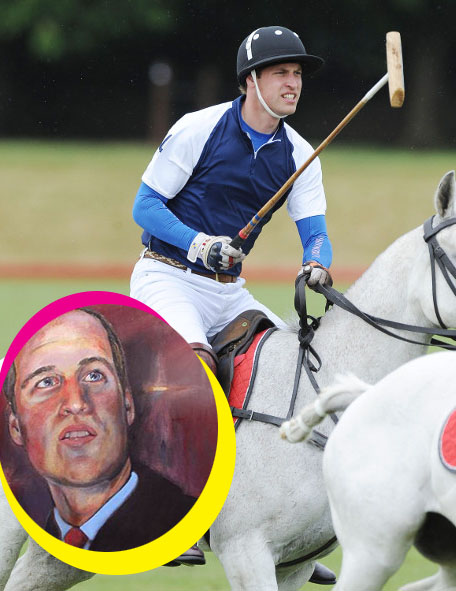 Painter [I hesitate to call him this] Dan Llywelyn Hall revealed his official portrait of Prince William at Gwydyr House a couple days ago. The result was… uh, I don’t know how to say this nicely, so I’ll just say it – horrible. The ‘portrait’ looked like a ten year old experimenting with watercolors and drawing his dad’s face with a bunch of finger paint.

In fact, if you told me that Prince George drew that portrait, I wouldn’t be surprised. Ok, maybe I would be surprised a little since the kid can barely walk, but you get my point. It is an awful, awful portrait, and it should be hidden from public view, not revealed for the whole world to stare at.

This painter previously did a portrait of Queen Elizabeth as well, and while that was also pretty juvenile, it was nowhere near as bad as this one. In fact, I’m starting to wonder if this dude has some sort of vendetta against Will, because you can’t possibly make him look this bad by accident, can you? I mean, Will has his mouth open in the ‘portrait’, he’s staring off vacantly into space, and his face is completely distorted. The best thing we can say is that his receding hair line in the portrait is a little more flattering than in real life, but that’s not saying much.

This portrait is supposedly going to be sold at an auction for charity, but who’s going to buy this? I don’t see anybody wanting to hang this up in their living room, and actually, I wouldn’t even want to keep this portrait, royal history or no. William’s open-mouthed grimace and vacant eyes would haunt my nightmares, if they’re not already going to.