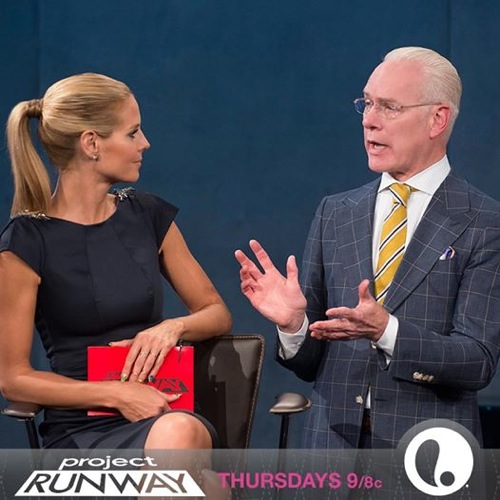 On last week’s episode the designers drove Lexus vehicles in their quest to track down vintage and unique materials at flea markets, garage sales and storage facilities. Season 4 winner Christian Siriano was the guest judge. Did you watch the last episode? If you missed it, we have a full and detailed recap right here for you.

On tonight’s episode the competition heats up when a challenge determines which contestants will go to Fashion Week. Included: Eliminated designers return to the workroom.

Tonight’s episode is going to be another drama packed one, which you won’t want to miss. So be sure to tune in for our live coverage of Lifetime′s Project Runway season 13 episode 12 at 9PM EST! While you wait for our recap, hit the comments and let us know how excited you are about this new episode of Project Runway tonight.

Tonight’s episode of Project Runway kicks off with Tim Gunn surprising the designers at their rooms while they are still in their pajamas. He tells them all to meet him on the roof in ten minutes. The final five designers head up to the roof to meet with Tim Gunn and introduces them to his friend Bryan, who is Lexus’s corporate ad designer. For this week’s challenge they have to create a look that is “street chic.” They have to go out on the streets of New York to search for inspiration, and they will be driver around in courtesy 2015 Lexus’s for the day.

The designers hit the streets of New York and take pictures of everything and anything that inspires them, strangers, boutiques, ladders, graffiti, etc. Afterwards they head to Mood with Tim Gunn to pick out their fabrics. They go back to the design room to work on their outfits. Char is working on a petaled skirt. And cutting out tiny individual petals and sewing them together to make a solid piece. Amanda is still torn on what exactly she is doing, she bought five different fabrics and still isn’t positive which one she is working with.

The designers take a break and go eat lunch, and when they return there is a surprise waiting for them in the design room. There are five mannequins with previously eliminated contestants’ outfits pinned to them with their names. Tim Gunn arrives and tells them that they will each be assigned one of the losing looks and they will have to turn it in to a winning design. They will get to go back to Mood and they have a budget of $100 to buy fabric to add to it.

Emily gets to go first and decides to work on Samantha’s blue gown. Char goes next and chooses Korina’s sweater and poncho. Amanda decides to revamp Fade’s play and pause dress. Kini chooses Mitchell’s red dress, so Sean is stuck with Sandyha’s bizarre pink children’s jumper. The designers head back to Mood to pick out fabrics they will need to turn the loosing outfits in to winning outfits.

When they return to the work room, Tim Gunn has another surprise for them. He has brought in Korina, Mitchell, Fade, Samantha, and Sandyha to work as the designer’s helpers. They are not collaborators and will not be allowed to contribute creatively. When Korina learns that she has to help Char, she is furious. She tells Tim she doesn’t want to work with Char because she is still furious with her and it is clear that she should not be here. Tim tells her she can leave the work room, and she storms out crying and slams the door. Tim reassures Char that they will find her another helper.

The designers get to work with their helpers, and begin delegating their work. Tim returns with Alexander, and announces that today he will be Char’s helper. It’s time for critiques. Amanda shows Tim her maxie dress which she is piecing together with different fabrics. She is still stuck on Fade’s dress and isn’t sure how she will transform it.

Emily’s street chic design is a hoodie she is working on with a unique graphic red fabric. She has switched out a skirt for Samantha’s gown and added a floral skirt. Tim warns her that the dress may still be too simple and looks like something you could stop down the street and buy.

Tim is concerned with Char’s designs. He thinks her street chic design is too loud with the petals on the skirt and pockets, he tells her she should reconsider the pockets. He thinks she has the opposite problem with Korina’s outfit, she is playing it a little too safe. Kini’s denim jacket has the same problem, Tim warns him that it looks ordinary and doesn’t have Kini’s signature traits. After Sean’s critique, he is going to have to go back to the drawing board, according to Tim Gunn his dress looks “too cheap.”

The models arrive for their fittings and the designers begin racing around to finish up their designs. After picking out their hair and make-up for the runway, Tim Gunn announces that it is time to head down to the runway for their final fashion show for the judges. Amanda is concerned as she puts the finishing touches on her transformation of Fade’s dress. She knows that it looks and feels rushed, but she was just out of time. Meanwhile, Alexander is having a tough time being Char’s helper, she is treating him like he doesn’t even know how to sew and talking down to him.

It’s finally time for the runway show, the designers and judges take their seats, along with guest judge Shay Mitchell from Pretty Little Liars. It is an anonymous runway show, so the judges have no idea which designer created which look. After the models have walked in each designer’s street chic look and their repurposed look, the judges begin comparing notes.

The judges aren’t impressed with Kini’s frilly denim skirt with his white top and trench coat. But they love his red shoulder dress that he repurposed from Mitchell’s losing design and explain that it is “extraordinary.” Emily is up next, Heidi doesn’t think her street chic look is appropriate for a final run way show, and it looks a little bit like a pair of pajamas. The judges are disappointed with her repurposed dress from Samantha’s gown. Everyone loves Amanda’s maxie dress, but they think her model’s make-up is a little off. Char’s street chic has a little too much going on for the judges’ liking. After taking some time to look closer at the designs, the judges are ready to announce the winner.