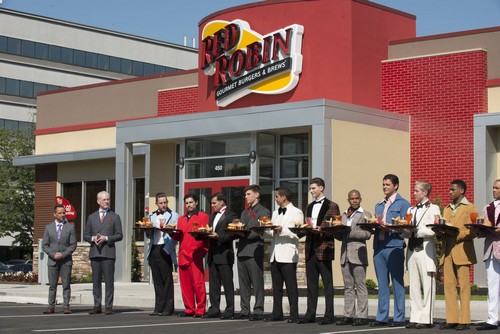 On the last episode Designers had to use “Marie Claire” magazines from 20 years ago as their inspiration, the designers then had to go and attempt creating looks that were futuristic. Sandhaya was announced as the winner again and had immunity for the next challenge. Sean, Alexander and Angela were in the bottom. Alexander was in and Angela was out. Angela was shocked and of course she cried, the other designers hugged her and said their goodbyes. Did you watch the last episode? If you missed it we have a full and detailed recap, right here for you.

On tonight’s episode the designers must re-purpose a selection of vintage men’s suits to create looks for modern women.

Tonight’s episode is going to be another drama packed one, which you won’t want to miss. So be sure to tune in for our live coverage of Lifetime′s Project Runway season 13 episode 4 at 9PM EST! While you wait for our recap, hit the comments and let us know how excited you are about the new episode of Project Runway tonight.

Tonight’s episode of Project Runway begins with the designers heading to Red Robin. They are introduced to the vice president of Red Robin’s brand, a slew of waiters come out of the restaurant in tacky old suits. The designers learn they have to make a “high fashion look” by re-purposing the old suits. Sandhya won last week’s challenge, so she gets to choose which designer gets which suit. Some of the designers are happy with the choice that Sandhya makes for them, but most of them are not thrilled. Shawn hates his tan corduroy suit and thinks it looks like a couch.

Now the designers have half an hour to sketch their new designs. Mitchell has sketcher’s block, and has no idea what he is going to do with the hideous suit that Sandhya gave him. Afterwards they head to Mood to pick up fabrics to use with their suits.

They head back to the studio to begin working on their suits. Kini is excited to get to work because he thinks that Sandhya picked him out one of the better suits. Kristine and Korina are horrified when they realize they are both making identical motorcycle jackets, and neither of them is willing to change their design. Meanwhile, Amanda is apparently allergic to her suit and is having a hard time working in between sneezing.

While they are working Hernan calls Sandhya out for giving some of the people crappy suits that they couldn’t work with. She argues that she is nice and she didn’t exactly give herself a Gucci suit. Hernan thinks she is fake and acts totally different off camera.

Tim comes in to check on the designers, he is impressed with Amanda’s fringe and patchwork dress and how speedy Kini is sewing. He gives Alexander a pep-talk after his poor design last week and reassures him that he just needs to do the best he can with what he has to work with. Mitchell tells Tim he is “in-between” and is not feeling very inspired with the suit he got. Tim thinks the straps on his dress are “overly commanding.” Hernan shows Tim his vinyl dress, and Tim is not impressed, he tells him it “doesn’t look pretty.”

Sandhya has a vision and tells Tim that she wants to put a mustache on her dress, Tim isn’t seeing it though and tells her that her design looks “too junior.” The designer’s models arrive and they begin fitting them with their dresses. Kini is happy once he sees it on the model and thinks everything is “falling in to place.” Hernan isn’t even able to fit his model because he doesn’t have enough of his dress done.

Two hours of the work day remain, and Kini is completely done, he’s relaxing on the couch watching the rest of the designers stress out. It’s time for the designers to all head home.

It’s the day of the runway show, and the designers all head back to work. They have two hours to finish their pieces. Sean decides at the last minute to scrap the entire top part of his dress and start over because it wasn’t working for him. The models arrive, and Kristine is freaking out because she still hasn’t made her model’s pants. There are less than two hours remaining, and Hernan still hasn’t even fitted his dress. Meanwhile the other designers accompany their models to hair and make-up to make sure their faces go with their designs.

It’s thirty minutes until runway, and Hernan is finally getting his dress on to his model. He pricks his finger with a needle and bleeds on the white dress. He realizes there is no way he will finish the hem on the dress so he just chops the bottom off from it to make it look edgier.

The designers head to their fashion show and sit in their seats at the catwalk. Heidi Klum takes that stage and informs them that Sandhya has immunity, but after the fashion show one of them will be going home. Heidi introduces the judges and says that their show is anonymous so the judges will not know which designer designed which piece. The models parade out in their designs for the judges who carefully take notes.

After the show, Heidi calls Kini, Kristine, Sean, Alexander, Hernan, and Amanda forward. The rest of the designers are safe this week and their scores have qualified them to move on to the next round. The safe designers head back stage to gossip about the runway show. One of the six designers remaining on the stage has the highest score and one has the lowest, one of them will be going home.

Now it’s time for the judges to critique the remaining six designers. They all rave about Kini’s dress and plunging neckline. They are impressed by how quickly he put together such a detailed design. The judges rake Kristine’s design through the coals, they all hate her pants with the organza at the bottom, they think that there is too much going on and it’s overall weird. Amanda’s bohemian fringe dress is a hit with the judges. Heidi Klum exclaims that she “wants that dress!” Sean explains what he did with his deconstruction of the suit. However the judges say that Sean’s dress looks like “peeling skin” and a “shredded mess.” Alexander is pleased to hear that he is a “high score tonight” and Heidi reveals that all of the judges loved his design. Hernan shares his vision behind his dress and explains that the material was hard to work with. The judges are disgusted with his design, and say it is “tacky and looks like a pop star Halloween costume.”

The judges excuse the designers so that they can discuss who will be going home. They are sick of Kristine’s biker jackets, and after looking over the model they realize it isn’t even finished and she taped and pinned the hems. They notice that Hernan was lying to them and there is nothing wrong with his fabric, he told them it was falling apart and after careful examination that is obviously not the case. The judges gush to Tim about how much they love Amanda’s fringe dress.