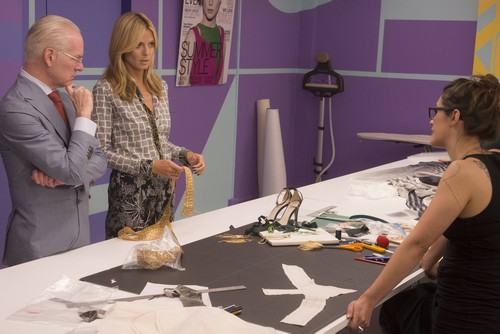 Tonight on Lifetime Emmy Award winning Tim Gunn returns with a new episode for season 13 of PROJECT RUNWAY. On tonight’s episode called, “The Klum of Doom,” the designers fashion a look for host Heidi Klum to wear at an awards show. Alpine skier Lindsey Vonn is the guest judge.

On the last episode the designers had to re-purpose a selection of vintage men’s suits to create looks for modern women. The judges revealed that the top three designers were Kini, Amanda, and Alexander. Amanda was the winner and won immunity for a week. The bottom three designers were Kristine, Sean, and Hernan. Kristine and Sean were safe, Hernan was officially eliminated from Project Runway. Did you watch the last episode? If you missed it we have a full and detailed recap, right here for you.

On tonight’s episode the designers must create looks for Heidi Klum to wear at the Creative Arts Emmy Awards.

Tonight’s episode is going to be another drama packed one, which you won’t want to miss. So be sure to tune in for our live coverage of Lifetime′s Project Runway season 13 episode 5 at 9PM EST! While you wait for our recap, hit the comments and let us know how excited you are about the new episode of Project Runway tonight.

Tonight’s episode of Project Runway kicks off with the designers gathering around the runway, Heidi Klum takes the stage in a trench coat. She reveals that she “has nothing to wear.” She tells the designers that their next challenge is to design her a red carpet dress for the 2014 Creative Arts Emmys, she will wear the winning look to the event. And she warns them that she better not end up on the “Worst Dressed” list.

The designers head to the design room, and begin brainstorming ideas for their Heidi Klum dresses. They are provided with a photo book of Heidi Klum in all of her red carpet dresses. They have thirty minutes to sketch, and then they are headed to Mood with a budget of $250.00. This week Amanda has immunity so she can’t be eliminated.

Sean is nervous because he was in the bottom of the group last week. Korina plans to do a one-armed dress that is mermaid shaped at the bottom. Tim Gunn arrives to take the designers to Mood to pick out their fabrics. Sandhya picks out peacock feathers, because she thinks that they are “connected to Heidi.” Mitchell opts to go with fire-engine-red, but he is concerned because there is a fine line between bold and hooker when you dress someone in red.

They head back to the design room, and Korina decides to scope out the competition and see what kind of fabric everyone brought. She is surprised that so many people are working with black. She bought a teal green fabric and plans to embellish it with snake print. Alexander thinks that Mitchell is in trouble, and he is dressing Heidi like a hooker. He mocks Mitchell’s dress and says that it looks like the devil is coming out of her stomach.

Char is extremely nervous about Heidi coming in to critique their work so far. There are seven hours remaining. Alexander is watching Sandyha design her dress, and trying not to laugh at the bizarre Cleopatra print as she literally paints green splotches on to the dress.

Heidi arrives to critique the dresses so far. Samantha’s dress is a winner, Heidi warns her that the top is good, but she shouldn’t let it get boring on the bottom. Amanda is working on a beaded top, and Heidi says that she needs to be careful that it doesn’t look like a bib. Heidi slams Mitchell’s dress and says that it looks like “devil horns” from the back and is lacking sex appeal. Heidi stops by Sandyha’s sequined and feather dress and tells her that it isn’t good and reminds her of the TV show Dynasty. Kristine’s dress doesn’t impress Heidi either, and she says it looks like a bed sheet. Heidi tells Korina that the green dress is “sad” and is disgusted that it is made out of real snakes. Korina and Kristine head to the break room and cry because they have no idea how to fix their dresses and don’t have any more fabric.

A few minutes later, Heidi and Tim return to the designing room. They announce that since so many people’s dresses are horrible, they are going to let them go back to Mood to get new fabric. Each designer gets an additional $100.00. The designers who aren’t going to Mood can give the other designers their $100.00. Seven designers decide to take Tim and Heidi up on their offer and go back to the store to get new fabric.

Meanwhile back at the design room Carrie is upset. She doesn’t think it is fair that the seven designers got a chance to redo their dresses, and were given a second chance. They are surprised when the designers return from the store and Korina decided to get another shade of green. She thinks this one will work though because it is emerald.

The models arrive for their fittings, Kini is happy with his dress once he sees it on the model. Sandyha asked everyone that wasn’t going to the store for their money, so she bought elaborate material that cost over $400.00. Some of the designers are annoyed that Sandyha was able to buy fabric that nice.

It’s the day of the runway show, the designers head to the design room to put on their finishing touches. Tim Gunn arrives and reveals the models are headed in soon. He leaves and the designers begin frantically trying to finish their dresses. The models arrive and being their fittings. Kristine’s dress looks awful, and the models breasts are falling out. Meanwhile, Korina’s dress isn’t even ready to be fitted on her model yet. The designers who are done, meet with the make-up artists and hair stylists to complete their looks.

Tim Gunn arrives and gives the designers and their models their ten minute warning. The models hit the catwalk, and the designers sit front and center. The judges take their seats and prepare to be wowed…or horrified. The runway show will be anonymous, the judges will have no idea which designer created which dress.

When the runway show is complete the designers take that stage. Heidi says that a lot of them did really well, but a lot of them missed the mark too. Heidi announces that Alex, Sandhrya, Shar, Carrie, Fade, and Samantha are safe.

The judges tackle Kini’s dress first, and the judges think it is “stunning” and the sequins are amazing. They also like the low back, and gush that it hugs her body and is really well done. Heidi thinks that Amanda’s dress is beautiful. But, the beads don’t go over well with the other judges. They do enjoy the fact that it isn’t as predictable as the other dresses. Kristine’s dress is up next, the judges joke that it is “indecent exposure” and refer to it as a “boob canyon.” Mitchell’s dress is clearly in the bottom three, and the judges inform him that it wouldn’t be “flattering on anyone,” and compare it to a Christmas tree ornament. Sean’s fringed dress is a hit with the judges, they all proclaim that they love the fringed ombre. Korina’s emerald green dress is a mess, the judges say that it is “so old lady.” And, Heidi still hates her new shade of green and point out that it is not emerald, plus they inform her that the “back is a disaster.” The judges excuse the designers so that they can take a closer look at the dresses.