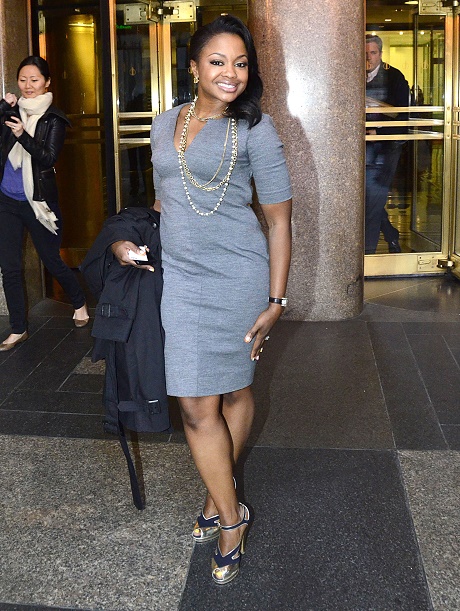 There are some pretty explosive claims coming from the Real Housewives of Atlanta set these days, with the most recent being that Phaedra Parks is allegedly cheating on Apollo Nida and dating a rich African man she has affectionately coined “Mr. Chocolate.” In the recently released super trailer for season 7 (which airs this November 9 on Bravo), we catch a glimpse of Cynthia Bailey accusing Phaedra of the adulterous affair. This happens immediately after viewing a clip of Phaedra’s (now incarcerated) husband Apollo Nida confessing he thinks his wife is cheating to Cynthia’s husband Peter Thomas.

Clearly, this rumor is gaining some momentum now, because Phaedra’s rep Steve Honig spoke exclusively to Radar and offered the following statement: “Phaedra has been a completely faithful wife. She does not know any men named Chocolate.” The rep then went on and stated quite jokingly, “I did hear she had her eyes on a guy named Pistachio, but it didn’t work out because he was nuts.” I had all sort of side eyes on this response, primarily because it reads so obviously like something Phaedra would say.

First off, it is highly unlikely that there is any man walking around with the name Chocolate unless he is an entertainer or performer of some type. The rumor mill had already picked up that Porsha Williams allegedly introduced Phaedra to this mystery African man, and if he is wealthy as it is said he is, his name most definitely is not “Chocolate.” What is more likely is that Phaedra coined him that as a private nick name and it somehow got out to the media. So, in true lawyer fashion, she put a spin on it and played to the fact that “Chocolate” is just as of a ridiculous name as “Pistachio” for a man she would be involved with, all in an effort to dispel talk of this situation.

Phaedra has touted herself as a Christian woman. Although it is unclear how a Christian woman could be married to such a thug life criminal as Apollo, the fact remains that she is a married woman. Once you say those vows in front of God and the church as a true Christian, you are expected to live up to them. If you don’t, your words begin to mean nothing. The sad thing is no one would really even be mad at Phaedra for cheating on Apollo. If anything, most people would understand. Apollo has had many well-documented cases of embarrassing his wife, not putting his children first and of disrespecting his marriage.

We have all been expecting a divorce announcement from these two soon. Perhaps since Phaedra has met a nice man, she will get moving on filing that paperwork to dissolve her marriage to Apollo. Then she can let us all know what Mr. Choclolate’s real name is and perhaps still carve herself some happiness out of all this. Whatever the case, this is a filthy load of laundry. Sound off with your thoughts in the comments section below. Help us wash it all out!