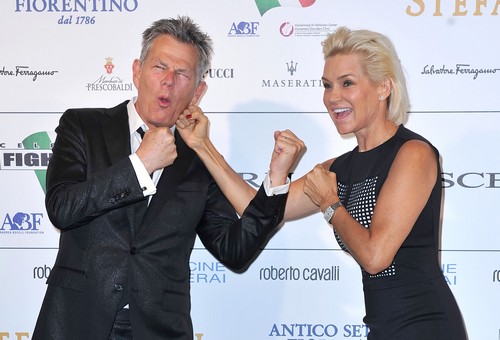 The Real Housewives of Beverly Hills and other shows in the Housewives franchise are experiencing some major cast shake-ups.  And, according to Real Housewives of Beverly Hills spoilers, there might be a new lady, beside Eileen Davidson,  joining the Bravo series.  But, not if Yolanda Foster has anything to say about it. Apparently Yolanda is threatening to quit the show if Bravo adds Shiva Shafai, her ex-husband (Yolanda has more than one) Mohammed Hadid’s new fiancée to the cast.  While Yolanda has filmed a few family scenes with Mohammed and Shiva in the past, Bravo is reportedly in talks with Shafai to bump her up to series regular.

According to the October 6 edition of Star Magazine, “While the 50 year old Real Housewives of Beverly Hills star acts chummy with ex-husband Mohammed Hadid and his fiancée Shiva Safai on camera, sources say that Yolanda is livid that Shiva might become a cast member!” Star’s inside source goes on to explain that, “Yolanda is very insecure and worries that Shiva, who is younger and prettier, will steal her thunder.  She’s nice to Shiva for the show, but she can’t stand her.  Yolanda made it clear that if Shiva’s offered a spot on the show, she’ll quit.”

There are so many rumored new additions to the Real Housewives of Beverly Hills, it’s hard to keep them all straight.  Supposedly The Young and the Restless actress Eileen Davidson has also signed on to the next season of RHOBH, so there isn’t much room on the cast for another new girl.  But, on the other hand, it makes total sense that Bravo would want to promote Shiva to a regular cast member because her presence will surely drum up some drama between her and Yolanda.

What do you think RHOBH fans?  Do you think Bravo will really bring on Shiva Shaif as a series regular, or is it just another rumor?  Would Yolanda actually quit the show, or is she all talk?  Let us know what you think in the comments below!