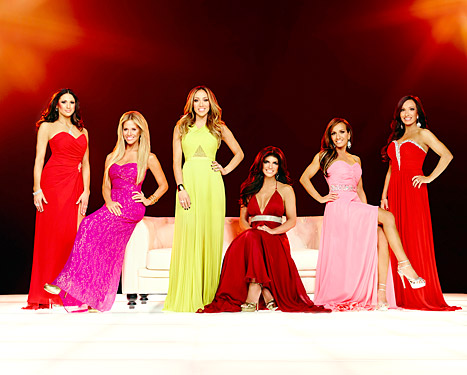 BRAVO’s infamous reality series Real Housewives of New Jersey is set to air its Season 6 Premiere this summer on Sunday July 13th. The highly anticipated season will feature an inside look at Joe and Theresa Giudice’s legal woes since they plead guilty to fraud charges and are both currently awaiting sentencing.

And, in typical Real Housewives fashion, there has been a serious cast shake up. There will be three returning RHONJ Housewives, and three newbies starring in Season 6. Theresa Giudice and her sister-in-law Melissa Gorga will be returning, along with Dina Manzo (Caroline Manzo’s sister), who hasn’t appeared on the reality series since Season 2. According to BRAVO the three new RHONJ newcomers making their debut on Season 6 will be Amber Marchese, Nicole Mauriello and Teresa Aprea.

BRAVO has released the first promo for Real Housewives of New Jersey Season 6, and it looks like this summer will be packed full of Jersey drama when the show premieres. The promo shows Melissa Gorga stripping for another sultry photo shoot, one of Theresa Giudice’s charming daughters calling her a “butt-hole,” and Dina Manzo crying about her divorce.

Newcomer Amber Marchese is a breast cancer survivor and will be struggling with a potential relapse. And, Nicole Mauriello and Teresa Aprea are apparently twins, and according to the RHONJ promo “a breath of fresh air.” Fans of the reality series can also look forward to a Halloween party brawl during Season 6, and we get to see the Gorga Family struggle with their new business, a garbage removal service.

So, RHONJ fans, will you be tuning into Season 6 of the BRAVO series? Or, have you had enough of the Housewives franchises? Let us know what you think of the new promo in the comments below!