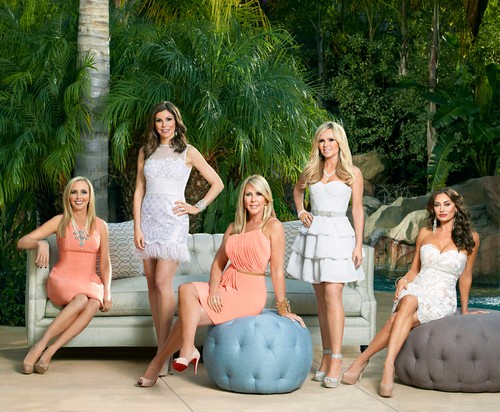 Cat fights, cheating, affairs, and a woman comparing her breast job to pre-augmentaton? Only on The Real Housewives of Orange County. For one, Tamra Barney has continued proving that she’s as unhinged as her ex-husband by screaming at his significantly younger girlfriend during an Orange Country court room last week. Restrained? Not our dear ex-Mrs. Barney. As Lizzie Rovsek would say, Tamra is bullying her way through anyone that comes between her and winning her custody battle with Simon Barney. Apparently, Tamra thought that Simon’s new girlfriend, Catushia Ienni, was secretly taping her with her daughter in order to gather more evidence for the custody hearing. Tamra lost her gaskets and ended up screaming her guts out at Catushia – in full view of everyone in the court room.

Since this is the Real Housewives of Orange County, that’s not even the most dramatic event that happened this week. Vicki Gunvalson finally confronts the cheating rumors concerning her partner, Brooks Ayers, but she claims it’s old news. She also says that she’s not engaged to nor living with Brooks, and he can date whoever ‘he wants to’. Um, sure, whatever you say.

Then, newcomer Lizzie Rovsek has had her fair share of drama, discounting her building feud with Tamra Barney. She’s known as Nick Lachey‘s ex-girlfriend, but she spent the better part of recent weeks trying to prove that she’d had a breast reduction, not a breast augmentation. She even used pictures of her breasts pre and post-op to prove her point, but we all know pictures can be manipulated. Is Lizzie telling the truth?

So much drama! What do you guys think of everything that’s happened on this show so far? Is it keeping your interested? Who do you hate the most? How much longer do you think Tamra will last before Bravo kicks her ass to the curb? Let us know your thoughts in the comments below.