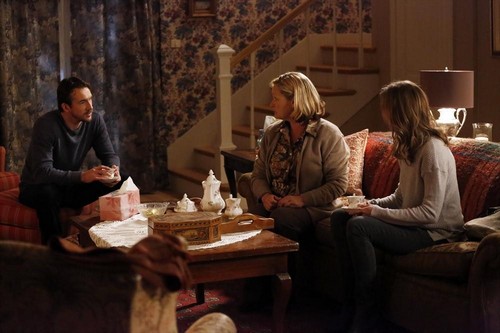 Tonight REVENGE returns to ABC for another exciting episode called “Blood.” On tonight’s episode Pascal’s family secrets are unearthed by Emily and Aiden. Meanwhile, Victoria reconnects with Mason Treadwell and inches closer to discovering the truth about Emily.

On tonight’s episode the notorious Pascal LeMarchal’s unexpected visit reverberated throughout the Hamptons, Emily and Victoria went head to head in a very public showdown.  Did you watch last week’s episode?  We did and we recapped it right here for you.

On tonight’s episode investigations into Pascal lead Emily and Aiden to uncover some long buried family secrets, while Victoria pays a surprise visit to former ally Mason Treadwell as she gets ever closer to exposing Emily.  Guest star Roger Bart returns as Mason Treadwell.

Tonight’s episode of Revenge opens with Emily and Aiden paying Aiden’s Mom a visit to reveal that they are engaged, which is just a cover-story. Aiden hasn’t seen his Mom in eight years, and she is less than thrilled to see Aiden. Aiden tells Emily he doesn’t want to hurt his Mom any more than she already is hurt, Emily reminds him that have to keep up the rouse and snoop around at his Mom’s house to try to find out how his Dad was connected to Pasquale.

Nolan draws up contracts to go into business with Javier on the App he created called “My Clone.” Javier is not happy when he realized Nolan will own 70% of the company. Nolan reminds him that he is taking all of the financial risk and the app wouldn’t exist if he didn’t iron out the kinks. Javier isn’t buying it, he plans to talk to other investors and see if he can get a better deal.

Margaux and Pasquale get into an argument, she is furious that her brother is now in the United States and negotiating deals for their magazine. She doesn’t understand why her Dad didn’t just have her do it. Pasquale insists her brother Gideon is more loyal and more serious about the family business, and reminds Margaux that she is being a “part-time wife.”

Victoria heads to prison to pay Mason a visit. Victoria thinks Emily is somehow linked to the Grayson cover-up, and she thinks Mason has valuable information on Emily Thorne. Mason tells Victoria that if she can make him a free man by the end of the month, he will tell her everything he knows about Emily.

Emily gets up in the middle of the night, and spends some quality time with Aiden’s Mom. Aiden’s Mom talks about how Aiden found his Dad dead after he committed suicide, and that his sister Colleen ran away years ago and they have no idea where she is now.

Daniel heads into Margaux’s office and asks her what is wrong. Margaux reveals that Pasquale is planning on stepping down and turning the company over to her brother Gideon. She hits her desk with her hand, and Daniel comforts her. Jack watches from the hallway, Daniel smirks at him.

Emily calls Nolan and Jack and reveals her problem. She had offered Mason exclusive rights to her revenge story, and she hasn’t given him any story yet. She needs them to deal with him, because she can’t leave Aiden’s Mom’s house. Charlotte walks in and overhears some of their conversation.

Stevie heads to the jail and meets with Mason. She provides him with a motion to set aside his conviction, he will be free for a few months and reveals to him that Emily transferred some funds for “sundries” into his account. Mason says “no deal,” he’s going with what Victoria Grayson offered him which was a lot more.

Emily finds Aiden snooping through an old shed. Emily tells Aiden that he needs to tell his Mom the truth about Colleen’s death. It’s not fair to not tell her. Aiden finds a name carved in the table by his Dad before he died called “Oscar Chapman.”

Victoria storms into Conrad’s suite and tells him that he needs to free Mason. She says Emily is interested in Flight 197, and Mason knows why she is. Victoria tells Conrad that Stevie visited Mason in jail, and she is working for Emily now.

Aiden sits down with his Mom and tells her that she and Emily aren’t really together, he just wanted “to give her some happy news.” He also reveals to his Mom that Colleen didn’t run away, she was kidnapped and held as leverage so that his Dad would plant a bomb on the plane, and she is dead. His Mom is devastated, but also relieved to know the truth.

Javier sneaks over to see Charlotte. He fills her in on his falling out with Nolan, she says that her brother Daniel can help him. Javier mentions helping Nolan and Jack decode files in a lawyer’s office, Charlotte is intrigued, she wants to know what they are up to.

Aiden is searching the internet for “Oscar Chapman,” but he can’t find any valuable information, he tells Emily is it a waste of time. He thanks Emily for staying by his side even though she has a crisis back home with Victoria and Mason, and he kisses her. They go to bed together.

Mason is in his prison cell. He rubs shaving cream on his face, and then begins gasping for air and drops to the floor seizing.

Victoria visits Stevie, and demands to know her interest in Mason. Stevie tells her it is none of her business. Victoria says she brought along a “friend” and opens a bottle of vodka. Stevie tells her to get out. Before Victoria leaves she reveals that Mason was killed.

Margaux stops by Daniel’s with a bottle of wine. She spoke to her father and he is “grooming” her to take over the company. She wants to celebrate with Daniel since he has always supported her and they “make a great team.”

Jack arrives at Stevie’s room and finds her a drunk mess. She starts sobbing that she is “in way over her head.” He reassures her that Mason’s death wasn’t her fault. He grabs her suitcase and announces he is taking her back to Los Angeles.

Pasquale arrives at Victorias’. She tells him that she has successfully ran Stevie out of town and now it is time to test her theory about Emily.

Nolan is driving a coroner’s van. He pulls over and climbs in the back and unzips the body bag. Mason is very much alive. He hands Mason a passport and the keys to his new bungalow on an island. Mason was bluffing when he was bartering with Victoria, he has no intention of selling out Emily. He tells Nolan that he knew Oscar Chapman, and he was a reporter that faked his own death.