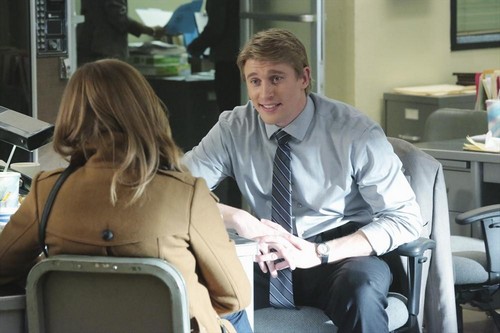 Tonight REVENGE returns to ABC for another exciting episode called, “Impetus.” On this evening’s episode, Emily resorts to drastic actions against the Graysons and those who are close to her.

On last week’s episode all the Graysons slowly gained the upper hand, Emily was forced to take on a new identity to expose them. Emily zeroed in on Pascal, which lead to a shocking outcome.  Did you watch last week’s episode?  If you missed it we have a full and detailed recap, right here for you.

On tonight’s episode dire circumstance leads Emily to take extreme measures against both the Graysons and those closest to her.  “Impetus” was written by Gretchen J. Berg & Aaron Harberts and directed by J. Miller Tobin.

Tonight’s episode of Revenge picks up where we left off last week, a masked man kidnaps Charlotte and takes her to an abandoned office. The man leaves the room and takes off his mask and reveals it is Aiden. Emily snaps a picture of Charlotte holding a newspaper with Pascal’s death on the front page.

Victoria is on the beach with Daniel, she reveals to him that she blames Emily. Right before Pascal headed up to the roof with Conrad, Emily shared a look with him. It was obvious they were working together.

A detective visits Margaux and reveals that the pilot and Conrad both collaborate their stories, his death is most likely going to be ruled an accident. However, there is one red flag – the police are puzzled as to why he was wearing a wire.

Javier stops by the stowaway and asks Jack if he has seen Charlotte, he can’t find her anywhere and he traced her cell phone and the last time she used it was at the stowaway last night.

Emily sends Conrad a video of Charlotte tied up and calls him through a voice disguising app and informs him that he will get his daughter back when he and Victoria confess to Flight 197 and framing an innocent man. They intercept Grayson’s phone calls, and immediately after then hang up he calls one of his “thugs for hire” and tells him to meet him at the wharf.

Daniel catches Margaux watching security tapes before she hands them over to the police. He shuts the door and confesses to her that he thinks his Dad killed Pascal as well. She shows Daniel a photo of Emily running down the back stairwell from the roof seconds after her Dad was killed.

Nolan has used the My Clone App to create a fake video of them beating Charlotte. He asks Emily what the first thing is she plans to do when she can be Amanda Clark again. She confesses she has no idea who Amanda Clark is anymore.

Meanwhile Emily is educating Charlotte. They place her in front of a television and explain through the voice disguise app how her parents funded the terrorists that bombe Flight 197 and then framed David Clark for the crime. Jack walks in and catches them in the room semi-torturing Charlotte and is shocked.

Victoria Grayson is up to something. She tracks Jack’s son down at the park with his nanny and when he scratched his hand she rushes over and gets a sample of his blood on a handkerchief. She heads home and Conrad pays her a visit, he shows her the fake bloody ear that Emily sent him. He explains that the kidnappers want them to call a press conference and come clean.

Jack refuses to leave the office as long as they have Charlotte, he strongly advises against Emily’s scheme. Aiden is concerned for Charlotte because she is having a panic attack. Emily storms out and heads to the pharmacy to get something to calm Charlotte down. When she is leaving the store a detective corners and insists she ride to the police station with him, he wants to question her about Pascal’s death. Obviously Margaux passed on the pictures of Emily on the stairs.

Emily sits down at the station with the detective and denies witnessing Pascal’s death. She calls Nolan on the phone so that he can listen in on their conversation, he learns that Daniel is at the stations and they are running Emily’s juvie record to see if her prints are on the wire that Pascal was wearing. Nolan calls Aiden and he rushes to the police station to stall them and Nolan begins hacking their database. They leave Jack in charge of Charlotte, and after they leave he sets her free.

Aiden arrives at the police station and causes a commotion by assaulting Daniel, they drag him off to a holding cell. The detective returns and announces to Emily that her prints weren’t a match an she is free to go. He warns her that the thinks her ex husband is really out to get her.

Margaux arrives at the police station and Daniel reveals to her that he thinks Emily is involved. They head outside to talk and Daniel comforts her and kisses her.

The press conference is minutes away, and Charlotte barges into Conrad’s room. He’s relieved to see her, but Charlotte informs him that he “disgusts her” and she knows what he did to her real father. She announces she is going to the police and Conrad insists she is going nowhere and calls her an “ungrateful bastard.” He tells her if she even thinks about crossing her “he will erase her like he has every other person.”

Unbeknownst to Conrad, Charlotte had a camera and they were broadcasting Conrad’s entire speech and confession to Flight 197 live on the local news. Conrad turns on the TV and is shocked to realize he was live the entire time. Emily and Nolan watch from a television and she begins crying tears of joy.

Conrad paces around the house while Victoria plays the piano. He comments that the police will be here any moment, he has no intention of running, but he plans to tell them that Victoria was his number one co-conspirator. The FBI arrives and Victoria lets them in, they cuff Conrad and march him out of Grayson Manor.

Aiden joins Emily on the porch and tells her that “revenge is hers.” Emily reminds him that the war is not over, and she still has to take down Victoria. She apologizes for not bailing him out sooner, and Aiden kisses her and tells her that they belong together. Jack interrupts them and says he “needs Emily.” He is confused because he thought she and Aiden were done. Aiden leaves and gives them privacy. Jack is impressed, when Aiden told him to set Charlotte free he was confused how that was going to take down Conrad. He had no idea they had planted a camera on her.

Jack says that isn’t why he came though, he gives her a ring he found in the cabin where the person was that was writing Charlotte letters and pretending to be David Clarke. Emily is shocked when she realizes that the ring was her father’s.

Conrad is sitting in a holding cell and Emily pays him a visit. He puts two and two together and is shocked when he realizes that she did this. She informs him it was all “in honor of Amanda and David Clark.” He asks her what she is going to do about Victoria and she reassures him that she isn’t finished yet. He smiled and says, “Well then, Godspeed.”