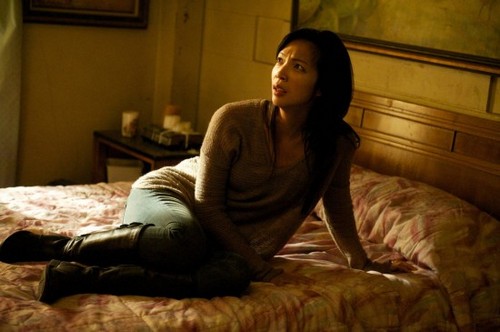 Tonight REVOLUTION returns to NBC with a whole new episode called “Fear and Loathing.”  On tonight’s episode Aaron and Priscilla find themselves at odds over the nano code.  Did you see the last episode?  We did and we recapped it here for you!

On tonight’s episode with their lives in danger in New Vegas, Monroe and Connor face a difficult decision in order to survive. Back in Willoughby, Miles questions whether he can trust Neville and Jason to help take down the Patriots. Meanwhile, Aaron and Priscilla find themselves at odds over the nano code.

Tonight’s episode is going to be great and you won’t want to miss it. So be sure to tune in for our live coverage of NBC’s Revolution tonight at 8PM EST! While you wait for our recap, hit the comments and let us know what your think of Revolution season 2, so far? Check out the sneak peek video of tonight’s episode below.  Hit the comments and let us know your thoughts!

The people of New Vegas are pretty harsh. Monroe and Connor are being forced into a dog fight just because of Charlie’s one mistake in dropping the decoy box of diamonds. While their penned up though where is Charlie? Does she even know about the guys and her part in them getting caught? Connor is hoping she picks up on it. If she doesn’t then he’s going to have to fight his father to the death.

Monroe tried to escape but they were too surrounded. Which leaves him with only one option left – he’s going to teach his son how to kill him. So that’s it’s both and entertaining enough for the masses. This way guarantees his son walking away alive.

Back in Willoughby, a surprising new visitor has arrived in town. Doyle has decided to make an appearance. Sadly for him, Miles and Rachel don’t know who he is and they figure the best way to get answers to why he’s here would be to take him as their hostage. But Jason knows why his stepdad is in town. He saw the equipment Doyle arrived with and it automatically rung a very familiar bell.

Doyle came to town with steel barrels. Jason knows those barrels will be used for the re-education program. Trainees get put inside those barrels for hours at a time. It’s what helps turn them into cold blooded killers like he was. Before he starts getting ideas however his father stops him. Neville doesn’t have time to get revenge for Jason. Not when their first priority has to be getting Julia back.

Neville won’t even have to do much if he were to walk up on Monroe. Connor was refusing to learn how to kill Monroe so his father told him his secret. He mentioned how Connor’s mother is dead because of him. Monroe told him everything – from dragging her in front of gunfire to the poor woman dying his arms.

After hearing how he lost his mother; Connor let go of his hesitation. He was so full of anger that he could have killed his father right there in the holding cell. But then he got quiet. Afterwards he didn’t want to eat and Monroe knew he would need his strength. In a rare heart to heart chat, Monroe revealed he loved Emma and that she was one of many of his many mistakes. He killed and schemed his way to the top and oddly enough none of it mattered. He got to top and found himself alone.

So Monroe warned Connor. He told when all of this is done that he should find a woman and hopefully have many children. He didn’t want Connor to be alone as he was.

Charlie did find out their plan went wrong. Then she tried to help which didn’t work. She went to Monroe’s friend, Duncan, expecting assistance. She thought the other woman would have some feeling left over for Monroe and that would push her into helping. It didn’t! Instead Duncan turned over Charlie to the men that have Monroe and Connor.

Duncan had to. She was afraid of retaliation if anyone had found about her assisting Monroe. Too bad her plan didn’t work. She’s still a suspect and suspects don’t exactly get the red carpet treatment in New Vegas. They’re planning to kill Duncan despite her gifting them a new girl for their sex trade.

In other news there has been strange weather lately. The nanos came by again in the form of Cynthia asking for help from Aaron. They did the same with both Peter and Priscilla. It seems rounding all of its creators in one room was part of its plan. The nanos are dying. They need its parents to help fix whatever wrong in their original code.

Priscilla didn’t want to. She felt the nanos have done besides cause damage and everyone would be better off it was dead. Peter on the other hand wanted to bring it back so he can be part of a new god. It was Aaron that made the finally decision and he went with saving the nanos. He had noticed how freaky the weather was getting. In order to save them from som bizarre lighting – they all are going to work on the code.

For all of Duncan’s mistakes; she gets to live another day. Charlie had escaped from her “customer” in time to get to the ring side. She was able to save Duncan’s life and in return she asked the favor to get repaid. Duncan and her men saved Monroe and Connor from the ring. Monroe was prissy later when he learned that Duncan had helped out of reluctance but he’ll take. He’ll also take the five men she offered up.

Yet that’s not his choice. Duncan gave them men but they’ll answer to Charlie and not to Monroe. That’s going to make his and Connor’s plan on rebuilding the militia tougher than they thought.

Miles changed his mind at the last minute about taking Doyle. He caught on it was trap. Miles thinks Neville and Jason betrayed but when the entire guns supply appeared to be are drawn in a Texan standoff that’s when the truth comes out. Neville admitted to wanting to find Monroe. He told him about Julia being held and what could happen to her if he doesn’t return with the general.

Miles and Rachel have been in similar positions nevertheless they can’t help Neville. They aren’t going betray someone on their side.

The Nanos are grateful for their parents’ help. They went as far to supply them a functioning computer for it. Priscilla is worried about the outcome though. She’s helping while thinking of all things that can go wrong. Thankfully Aaron was listing to her concerns all along.

He was never going to help the nanos. He was just letting it believe he was so that he could get the opportunity to implant a virus. Peter tried to stop and Priscilla knocked him out. Aaron stopped the machine to a rather shocking result.

Aaron abruptly woke up in a world without the blackout. He’s still rich and married to Priscilla and the rest of the world didn’t go crazy.