#RichKids Of Beverly Hills Shopping is Cardio: Dorothy Chang and Morgan Stewart – Spoiled Beyond Belief Or Faking It? (VIDEO) 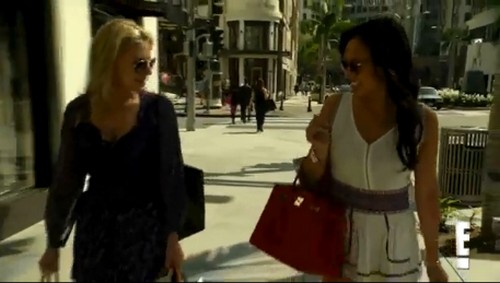 Here we go. Yet another reality show that focuses on a bunch of snooty rich kids who don’t deserve the attention and adulation of celebrity-hood. But life’s not fair, and the silver lining is that the #RichKids of Beverly Hills at least has a shot of dethroning Keeping Up With the Kardashians – and it’s about damn time, too.

But is it case of replacing something horrible with something worse? Keeping Up With the Kardashians was terrible and most people who watched it definitely hate-watched it, but at least it was self aware enough to be entertaining to some people. But these #RichKids of Beverly Hills seem to be trying to hard to emulate Sex and the City that they just come off as incredibly annoying, spoiled, and whiny.

A clip from the premiere has been released by E!, and it features two characters, Dorothy Chang and Morgan Stewart, shopping on Rodeo Drive. And according to Dorothy and Morgan, “Walking from Barney’s up Rodeo is always like cardio.” But wait, it doesn’t end there. Morgan also adds, “My boob sweat at this moment in time… I have like a puddle forming.”

This is what we have to look forward to – boob sweat and shopping. Great, just great. I’m telling you, we’re jumping out of the frying pan and into the fire with this show. No matter how ridiculous the Kardashians got, they were at least entertainingly stupid. These kids’ lives seem to revolve around social media and shopping, and making really idiotic and inane jokes. Is that a show we can keep watching, especially when there’s going to be nothing new to keep audiences interested? Or will the show manage to surprise us, and end up being a social commentary on the dangers of wealth and giving up your privacy? Jk, I kid. I know it’ll be the former, but let’s hope this clip is not reflective of the show’s entire tone.