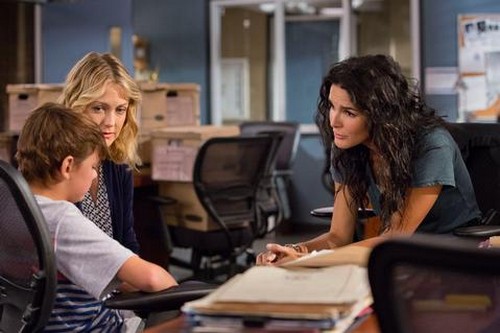 Tonight on TNT RIZZOLI & ISLES returns after a long hiatus with its winter premiere called, “Tears of A Clown.”  If you have never watched the show before it is based on characters created by best-selling crime novelist Tess Gerritsen, Rizzoli & Isles stars Harmon as Jane Rizzoli, a tough-as-nails Boston police detective, and Alexander as Maura Isles, a smart, impeccably dressed medical examiner from a privileged background. Despite being complete opposites, the two women share an offbeat chemistry and strong working relationship that lets them solve complex murder mysteries in the city of Boston.

On tonight’s episode when a kidnapper who dresses as a clown reemerges in Boston after more than 20 years, the squad is struck with fear. Desperate for clues, they dig through files from the unsolved abductions of the haunting 1988 “Summer of the Clown.” Meanwhile, as Jane’s relationship with Casey (guest star Chris Vance) becomes more serious, they are forced to face the fact that one of them will have to compromise if they are to take things to the next level. Maura also finds herself in a dilemma when she inadvertently gets in the middle of another relationship.

In what has to be one of the creepiest opening scenes ever, we see a clown suit as someone hums and whistles to some sort of demented music as he dresses in the suit. In the background it sounds as though someone is whimpering. VERY creepy!

Cut to Jane getting ready to run, but ending up on top of Casey. Maura comes by and breaks up the party. She and Jane head over to the coffee shop and only get a little light banter in before getting a message that they need to run. Frost is there and they all head to the station.

The emergency they are being called in for is the scary scene we saw moments earlier when a young boy misses his bus and is approached by the creepy clown from earlier. He is driving by and asks the boy if he needs a ride, assuring him he is safe since he’s a clown for kids. The boy refuses to get in the car, and the clown forces him in. A neighbor sees and pulls the clown off so the boy can run. He tells the clown he is going to call the police. The clown gets very scared and throws the man down. He falls and hits his head on the curb.

Moving on to the scene, the team is now there and are discussing a similar case involving a clown from 1988 after they are told it was a clown that tried to abduct the boy. They find a piece of his costume as they search the area. Later, Maura and Jane are talking and as Maura schools Jane on “shop talk” for medical examiners. Jane then realizes the plastic flower they found at the crime scene from the clown costume had to be made from the 80’s. Then she begins to consider that this case may definitely be related to the 1988 case.

Casey and Jane enjoy a nice picnic lunch. They begin to talk about their future and how someone is going to have to sacrifice if they want to stay together. He tells her he may have to resign his position and gives her a ring. As Jane meets up with Maura to get updates on the results from the labs. Maura immediately notices the ring on Jane’s finger. Maura seems sad that Jane could leave. Maura leaves as she begins to cry.

Frost is upset with Isles because he believes it was what she shared with his girlfriend that encouraged her to move forward with her recent job offer which requires her to move to Beijing. Maura feels really bad.

At another crime scene a few witnesses share their account of what happened when they saw a clown abduct a boy by throwing him in his car. Just then, the boys mom comes to the bus stop where her son should have been and notices the backpack that was left there was his.

Back at the station, the team views a video that was sent by the clown where he shows the boy with him either passed out or dead-Isles cannot tell. The team goes frame by frame and starts noticing details of the house where the video was shot. As the team is piecing together more clues, Jane is called by Casey to meet him outside. It is there he tells her he has emergency order to leave and must leave immediately. He has so many questions about their future but is still so shocked. Before they can finish talking, Frist calls her as they need to go check out some leads. They find the house with the boy in it, appearing to have been drugged. Moving on to the clown, he is shot in the head in a nearby chair and they suspect suicide.

Isles plans a massage for Jane at her house, and brings along another masseuse for herself as well as she tries to cheer up her friend. Jane begins to ask the boy who was taken, some questions about the incident while back at the station. Isles comes in and confirms to Rizzoli that the boy was given valium. He appears okay and doesn’t remember much beyond the clown giving him milk and cookies.

At the crime lab, Isles believes, after studying footprints, that there are at least two clowns because and the two clown incidents involved two different clowns. The team then begins to go through files from the 1988 case to try to gain some more clues. They key in on a prior victim, who is now 33. He has a pretty full record and matches the description of one of the clowns. They bring him in for questioning. They show him a pic of someone in a clown suit and ask him if he recognizes him. He tenses up and begins telling what happened to him in 88.

Rizzoli and Detective Korsak go to visit a supposed witness who “found” the boys backpack. They found through the DNA that a family member of Derrick’s (the molested boy) matched that of the skin under the nails. The supposed witness was Derrick’s brother and was attempting to get revenge on the real clown who molested his brother when they were young. He planned the whole thing to make it look as though the clown struck again. Finally he admits it was he who was responsible and he was only doing it for his brother so the pedophile who hurt him would pay for what he did.

Tonight’s episode ended with Frost beginning to ease up on Isles for her mistake of involving herself in his rellationship.