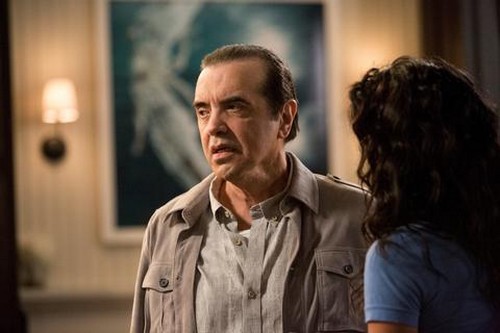 Tonight on TNT RIZZOLI & ISLES returns for the second show after a long hiatus with an episode called, “Just Push Play.”  On tonight’ episode Jane’s dad returns after being gone for more than a year. And he’s got some shocking news.  Did you watch last week’s episode?  We did and we recapped it right here for you.

On last week’s episode when a kidnapper who dressed as a clown reemerged in Boston after more than 20 years, the squad was struck with fear. Desperate for clues, they dug through files from the unsolved abductions of the haunting 1988 “Summer of the Clown.” Meanwhile, as Jane’s relationship with Casey (guest star Chris Vance) became more serious, they were forced to face the fact that one of them will have to compromise if they were to take things to the next level. Maura also found herself in a dilemma when she inadvertently got in the middle of another relationship.

On tonight’s episode a singer and guitar player is brutally and mysteriously stabbed in a bar. As details emerge in the case, the squad soon realizes that the victim had something to hide. Meanwhile, Jane’s dad (guest star Chaz Palminteri) returns after being gone for more than a year. And he’s got some shocking news.

Tonight’s episode opens in typical Rizzoli and Isles style…grabbing our attention from the moment the first scene opens with a young guitar player in a bar struggling with a man. Meanwhile, Jane’s dad returns after being gone for a year and the family is not happy about it. He questions Jane’s mom on moving on, to which she asks him how he could have left her in the situation he did. No one is happy to see him, but Jane tries to keep thing peaceful by gently asking him to get to a hotel. She is on her way out after getting a call about a murder in a bar.

Cut to the bar scene and Rizzoli, Isles, Frost, and Korsak see the young girl murdered on the floor of the bacthroom. They begin to piece things together and gain a few ideas from Maura about the potential murder weapon. They all take off to begin investigating. Jane arrives home and her dad is waiting there, drinking on front of her door. Once inside, he shares that he has cancer. While Jane feels sad to hear that she lays into her dad for cheating on her mom and leaving and breaking up the family. After offering a few excuses for his actions, he asks Jane to tell her mom about his cancer, saying he needs her.

Later, Jane and Maura are talking and Jane asks Maura about prostate cancer and the common symptoms. She shares that she feels her dad may be lying. Her mom walks in just then and shares that she knows something is wrong. After Jane shares the news, they both begin to cry.

Back at the station, the team has a bit of new information n their victim. She is the daughter of a famous composer, and she had a DUI recently. They look into social media for tips or pictures of her, but are coming up with nothing. Isles confirms no drugs in her system, only vanilla and a coupe drinks based on her alcohol level. While Jane needs to take off to go check in on her mom, Frost and Korsak interrogate a man who was found to have the victim’s credit card. They arrest him on a few charges but only larceny sticks as they didn’t have enough to charge him with anything more.

The family plans one last dinner together at the request of Jane’s father. He shares with the family that Angela has been taking him to his appointments and taking good care of him. This upset Frankie, but Tommy is very concerned about his father. While Frankie and Jane say they must head back to the station, Tommy accompanies his mom and dad to the doctor.

The victim’s parents are giving some insight to the girl’s past and share she played piano, not guitar. She was adopted and had grown up with many problems. Korsak and Frost find that they need a warrant to get some of the victim’s rehab records. They know that it may have been a nail file that killed her and based on them finding black nail polish remnants, they consider that it may have been another girl that murdered her. She had marshmallow root in her stomach but they cannot figure out what it is from. Jane is back and they begin doing some more digging. They find a video of the girl singing and playing guitar that someone posted online. They see a man yelling at her in the video and are able to track him down. At first he denies knowing her, but after Frankie shows the video, he ends up spilling what he knows, but promising he didn’t murder her.

The family is all there ready for their special dinner. Everyone is surprised to see that Angela also invited her boyfriend to the dinner. Frank is drinking and begins getting belligerent and rude with everyone. The boys leave, and little by little everyone walks out.

Back at the station, they secure a warrant for the records of Natasha (the victim) from the rehab facility. Her items were still there so the Frost, Korsak, and Rizzoli search her former room. Delivery records , stolen music sheets, black nail polish all lead to Natasha’s roommate in rehab. They confront her and she begins to open up and provides the rest of the missing puzzle. She wanted to be the only one performing a particular song that night for the record exec that was going to be at the bar which was the venue for the show. They arrest her for the murder of Natasha.

Meanwhile, Angela stands up to Frank and tells him that he should not plan to move closer to them because they are no longer together. He says his goodbyes to Angela and Jane and leaves. They end on a good note with Maura, Jane, and Angela praising each other and having a sense of relief.