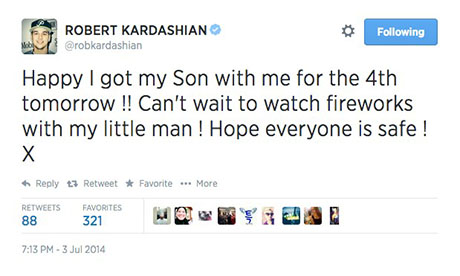 Well, if it isn’t another illegitimate child born out of the Kardashian Kid-Kreating Klan! Yep, all those vague tweets that Rob Kardashian Jr. was sharing with his followers a few months ago were not just all talk. Apparently, Rob will be spending the 4th of July with his son as well.

Rob tweeted this little ditty on July 3, subtly telling the world he is a father. I know, I know….what the hell kind of Kardashian is this guy doing things in a “subtle” way? Somewhere Kris Jenner is telling a bartender, or daughters Kendall and Kylie, to pour her another….and make it a double.

Rumors first swirled about Rob having a child when he began posting comments on Twitter about moving to Miami to be closer to his son. He has never given an official statement about it, but has been hinting at it for some time, obviously desperate to share the news that he can procreate like the best of them (“best of them” meaning his sisters).

Months ago, Rob posted this cryptic message, “Shout out to God … Shout out Mom, shout out to my son’s mom cuz she been holding me down since high school n shout out to my son Robert the Third. lol.” Not sure what the “lol” is for, but apparently something is supposedly humorous to Rob.

Kris obviously doesn’t want this secret out, so she is desperate to keep him quiet about it. Maybe that caused some of the added friction during his quick turnaround trip to Paris for Kim’s wedding. Rob seems to be tired of Kris’ ultimatums and lack of regard for his feelings and he is now apparently ready to share his news. Hopefully Kris follows her only son on Twitter. If so, then she likely saw this coming because, last month, Rob tweeted a message to the mystery mother of his child. He said, “And to my baby mama I loveeeeeee you.”

Though Rob didn’t share where he’d be spending the holiday with his son, he sure seemed excited to share. The question now is whether Kris can stop him from posting pics of his special get-together with his offspring. If he is a true Kardashian…we can expect some Instagram pics of their day!

Tell us what you think, CDLers…is Rob just reaching for attention, playing dad to another man’s child, or did he really become a daddy under the radar?