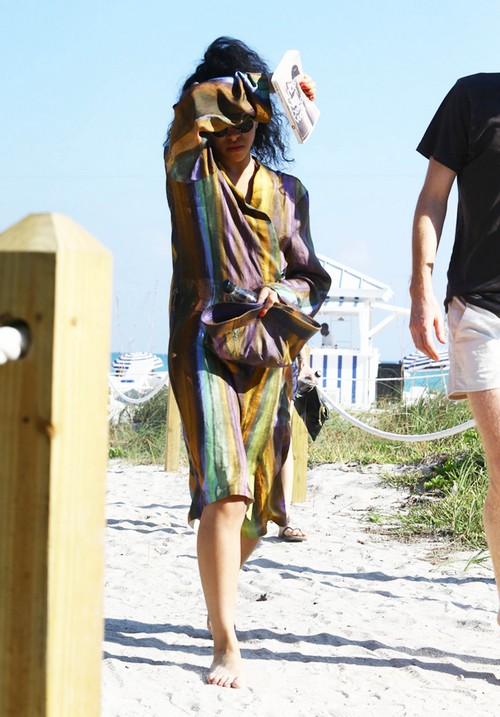 FKA Twigs and Robert Pattinson have been dating for a few months, but that doesn’t mean anything in Hollywood. Kristen Stewart knows there are couples that have dated for years [cough, Jennifer Aniston and Justin Theroux] for PR purposes. From everything Kristen Stewart has seen of FKA Twigs and Robert Pattinson, it’s pretty obvious that it’s either a one-sided love affair or a romance derived purely for publicity purposes.

FKA Twigs wanted a career boost, and Robert Pattinson wanted a badass new girlfriend that could help him remove the stench of Twilight and Kristen Stewart’s cheating affair. And I mean – it’s definitely doing that, but his relationship with FKA Twigs has also made him look like a pussy-whipped stooge who’s being used by his girlfriend for fame. So I guess Rob’s traded in the sparkly vampire image for something that’s worse, but maybe he doesn’t agree with that particular comparison.

Either way, we’re starting to hear whispers that FKA Twigs and Robert Pattinson – despite the engagement rumors that have popped up recently – are planning to call it quits after the winter holiday break. The press speculation and media coverage has reportedly started to become overwhelming for FKA Twigs, who isn’t comfortable with how she’s being portrayed in the media, regardless of the truth of that portrayal.

Kristen Stewart knows that now that FKA Twigs achieved what she’s wanted to in this relationship with Robert Pattinson, which is to become a household name, it’s soon time to break up. FKA’s guaranteed her career, now she just has to keep building the momentum without losing any of her newfound fan base. And Rob? Well, that couple always had a ticking time bomb, so a breakup between FKA Twigs and Robert Pattinson isn’t going to shock a single soul.

What do you guys think? Is this a false alarm or are Robert Pattinson and FKA Twigs really planning to breakup after the winter holidays? Will Kristen Stewart be right there to comfort her Twilight lover when FKA Twigs is done using him?