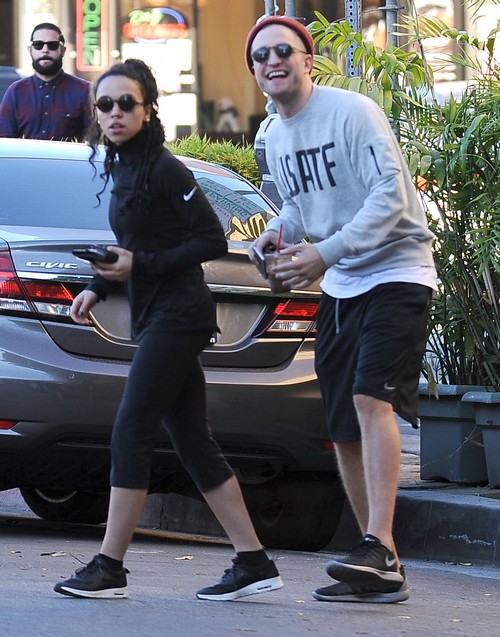 Robert Pattinson grabbed FKA Twigs’ butt while posing for paparazzi photos in a low class display of PDA that certainly doesn’t reflect well on either of them and are far from ‘cute.’ FKA Twigs and Robert Pattinson have always been very open about their relationship, unlike Robert Pattinson and Kristen Stewart. Why wouldn’t they be? FKA Twigs wants the whole world to know about her relationship with Robert Pattinson, considering the benefits it brings to her career. Holding back on the one factor that is sure to bring her worldwide fame and [dubious] adoration would be silly, and for whatever reason, Rob is cool with it.

Now, FKA Twigs and Robert Pattinson have usually kept their PDA to a PG or PG-13 level. Kissing, holding hands, and hugging each other in public. However, there are several pictures that have made their way online, showing Rob and FKA out for lunch in LA on November 21st. This would be completely fine, except for the fact that Rob was ‘caught’ grabbing FKA’s butt in a low class embarrassing display of PDA while they walked on the sidewalk.

And remember, this is coming from someone who ‘doesn’t want to be famous’. FKA literally gave that quote a few days ago, alleging that she doesn’t want to be famous because she wants to be taken seriously. Um, sure. I believed Kristen Stewart when she said that, because she and Rob were always ducking behind bins and dumpsters to escape the cameras. But do I believe FKA Twigs? I believe that she doesn’t want the traditional definition of fame, but I do not believe – in any way, shape or fame – that she is not using Rob to increase her public profile. Hand holding in public is one thing, but butt grabbing when knowing the cameras are on you? And in Los Angeles, home to the world’s most aggressive paparazzi? Come on, they’re not stupid.

But wait, after Robert Pattinson and FKA Twigs spent the afternoon in butt grabbing PDA famewhore glory they went to the most well known celeb hangout in California – Chateau Marmont! And we must repeat… FKA Twigs doesn’t want to be famous! Kristen Stewart needs to pick a phone and talk some sense into her old boyfriend before it is too late. Rob’s career is heading downhill, rumors are that he is partying excessively and that FKA Twigs might try to trap him in pregnancy and marriage.

What do you guys think? Is the PDA all for our benefit, or not? Should Kristen Stewart step in and save Rob from this relationship and his downward spiral? Honestly, Robert is looking more like Justin Bieber in some of those pics below than the classy guy he was prior to this relationship. Let us know your thoughts in the comments below.

‘Twilight’ actor Robert Pattinson and girlfriend FKA Twigs spotted out for lunch in Los Angeles, California on November 21, 2014. Robert enjoyed grabbing FKA’s butt while the pair strolled along the sidewalk by FameFlynet