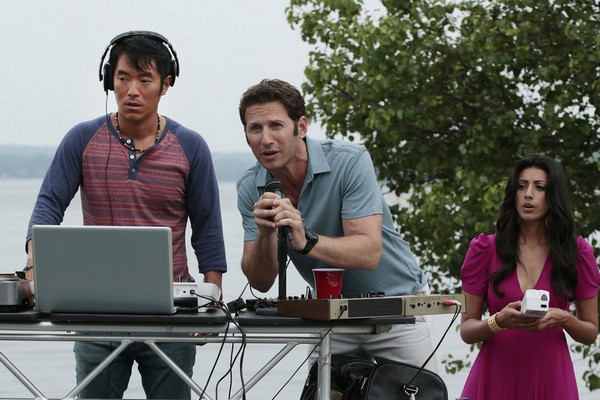 Tonight on USA Network ROYAL PAINS continues with another episode in its sixth season called, “Electric Youth.” On tonight’s show Hank and Divya treat a house-sitter in the Hamptons while Jeremiah grows closer to Viviana after helping her burlesque dancing friend.

On the last episode Hank feels there may be more to Ray’s new chef’s seemingly drunken behavior on the job, while Divya treats a NASCAR crew chief whose anxiety has a dangerous turn. Jeremiah is concerned about the future of HankMed’s new lab, and Divya makes a decision about the future while Hank talks to Emma about her own. Did you watch the last episode? If you missed last week’s episode we have a full and detailed recap, right here for you.

On tonight’s show Hank and Divya treat a house-sitter in the Hamptons while Jeremiah grows closer to Viviana after helping her burlesque dancing friend. Elsewhere, Paige discovers something that could complicate her new business with Russel, and Emma contributes to the Hamptons’ hottest gossip site.

Emma is living a double life on the sly. She’s taken on a new job and has concealed it from everyone else. She’s been attending the rich and famous’s parties just so she can get dirt on them. But poor Hank is stuck most nights waiting up for her. He already been through a similar situation with Evan so this time around with Emma – he wants to be extra diligent.

And it’s also why he’s being really considerate towards Divya. The new mother simply wants to spend more time with her baby but she didn’t how to tell the guys. Summertime is their busiest season and her slowing down to become part-time will hamper their business. However Divya tends to forget how much she’s loved.

Once her “news” was out – no one had a problem with her cutting back her hours. Although, technically, she wasn’t the one that made the announcement. Jeremiah saw what working full-time was doing to her so he spilled the beans to Hank.

That’s who Jeremiah is. Whereas he normally has a problem communicating with people – he’ll speak up when it’s important and especially for a friend. Sometimes it doesn’t even have to be his friend. The girl he’s been interested in, Viviana, has a roommate that’s suffering from a neck problem. So what did Jeremiah do? He stepped in as if it wasn’t that much of a big deal.

And it really wasn’t. He diagnosed her friend as having a feather caught in her throat. The burlesque dancer is constantly swallowing pieces during her act onstage.

But Evan’s problem isn’t as easily fixed. He’s having second thoughts about working with Ray. It’s actually starting to affect his sleep because that’s how scared he is and yet he’s not in the position to walk away from the deal. To do so would bankrupt HankMed.

Evan can’t let that happen. HankMed has been the only thing that has made him feel like he’s done something with his life. He wasn’t always this successful. To tell the truth and shame the devil – he was pretty much a couch surfing bum. As in big ideas and little follow through. Then he and Hank built something by coming to the Hamptons.

That’s why he’s been solely focused on the job. Yet it took overhearing Hank describe his point of view on their childhood for him to fully understand what Hank has sacrificed for him. Growing up he thought it was natural that Hank took charge. Kind of like Hank was always meant to be the adult in their relationship, but hearing him tell a therapist that the reason he’s so overprotective with Emma was because he never had a chance to enjoy his teenage years – made Evan realize something. Maybe it’s time for him to be the adult and for Hank to have it easier.

Meanwhile Emma and Hank nearly jobs nearly collided. Hank and Divya were treating a house-sitter known for throwing wild and uncontrollable parties when they noticed his symptoms were worsening. So they called a halt in the middle of one of his parties making Emma give a hasty retreat. She didn’t want her brother to see what she was doing.

When Jeremiah heard what she was going through he just supported her. After he learned his lesson with Viviana earlier, he knew better than to try and fix every one of Divya’s problems. Divya has to find a good compromise on being both a good mother and good physician’s assistant on her own.

As for Paige; she still has a lot to learn about her own business partner. Namely that he’s a thief. They were re-doing some snob’s home and they saw that they couple desecrated a five hundred year old carpet. Fast-forward a few hours and the carpet, that he told their clients was ruined, could be found in cleaned and lying in his upstairs room.

Sometimes bosses do unethical things. And that’s just life. Take Hank first chance at being a teenager again. He and Evan broke into someone else’s pool and then proceeded to run for their lives when they got caught.

You never what people are capable of!