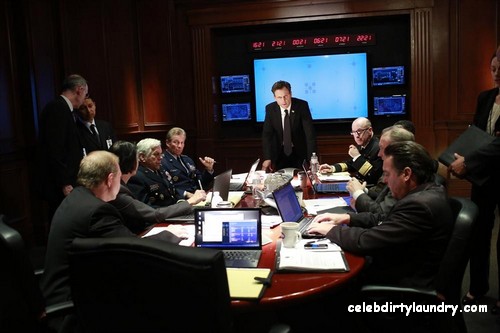 Tonight’s SCANDAL returned to ABC and we were treated to some more OMG moments especially at the end of the episode again.  I just cannot wait for next week’s season finale, to wet your appetite we have some juicy spoilers and a sneak peek video of “The Price of Free and Fair Elections” which will air April 17th, for your enjoyment below! On tonight’s show

On tonight’s episode a security breach caused the team to spring into action.  Because of Olivia and her team’s interference B16 was not able to stop a bomb meant for the president from being set.  Olivia’s father was called in to help stop Olivia’s mother who they found out was behind the bomb.  Jake warned Olivia not to trust her father.  The bomb was set under a church and Jake called Cyrus in time to clear the church.

Cyrus makes the decision not to call and evacuate the church because Sally Langston and the Vice-President are there for the Hightower’s funeral.  Fitz and his wife are still at the White House and Cyrus delays Fitz’s departure further – his intention being to allow the bomb to go off in a church full of people before Fitz arrives but while Langston is there.  Can you believe how evil Cyrus is? More happened which you can read in the detailed recap of Episode 17!  Did you watch tonight’s episode?  We did and we recapped it right here for you.

Spoiler alert: If you’re one of those people who doesn’t like spoilers, stop reading now! We have some juicy spoilers for you about the season 3 finale of ABCs “Scandal.”

Official ABC Synopsis: “Election Day has arrived and nothing is off limits as the candidates try to capture votes. Meanwhile, Olivia tries to understand Maya’s motives and Charlie makes a very surprising move.”

On the next episode the candidates are under the gun as election day arrives. The bomb goes off and clearly Cyrus did not warn people because people are hurt.  How will Cyrus live with his decision?

“The Price of Free and Fair Elections” was written by Shonda Rhimes and Mark Wilding and directed by Tom Verica.

Scandal Season 3, Finale “The Price of Free and Fair Elections” airs on ABC on April 17th, 2014. Check out the preview video below and let us know in the comments below what you think!