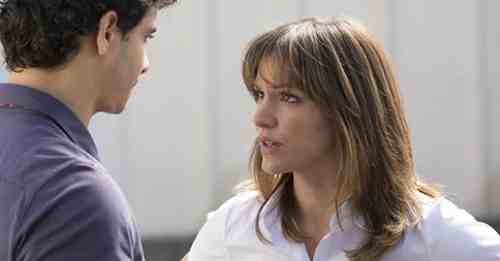 On the last episode, the Governor called on Team Scorpion when his daughter was mysteriously “bio-hacked” with a deadly virus and had only 24 hours to live. Meanwhile, the case took on a deeper significance for Walter after he received a letter regarding his sister. Did you watch the last episode? If you missed it, we have a full and detailed recap right here for you.

On tonight’s episode after Team Scorpion fails a military training mission, they are determined to prove their worth to Cabe and Homeland Security when a bomber threatens to take out the internet infrastructure of the entire Southwest.

This is definitely one series that you don’t want to miss. Don’t forget to stay tuned to Celeb Dirty Laundry where we will be live blogging every episode of Scorpion’s first season.

Tonight’s episode of Scorpion kicks off with Sylvester and Walter racing each other to see how fast they can solve rubik’s cubes. Cabe shows up at their lair and informs them that they are running late, and he doesn’t understand how a team of geniuses can’t tell time. Paige heads to the diner to turn in her apron and pick up her last check, and then drops her son off at school.

Cabe suits up Scorpion and sends them to a US military training camp with the director of homeland security. Walter and Sylvester are thrown in to a tank in the middle of the desert with a team of soldiers. They rush in to a bunker and go through a mock drill and tested to see how quickly they can extract files for the computer in the bunker. The director of Homeland Security is unimpressed, Sylvester froze, and Walter didn’t listen to orders. He tells Cabe as of right now they are no longer funding Scorpion.

Cabe and the geniuses return to the Scorpion lair and Paige is waiting for them with bagels. Wyatt shows her their training mission report. This was their chance to prove themselves to homeland security and they screwed it up. Walter tells her to find a way to “fix it.”

Sylvester tries to get on the computer and their WIFI is out. Cabe reveals that a bomb went off at a law office down the street and took out half of the street, six people were sent to intensive care. Walter asks if they can tag along with Cabe, but he says no they are on thin ice.

Cabe arrives at the law office, and learns it was a family practice. While he is talking to the police on duty, Walter and the rest of Scorpion rush in and tell Cabe that the bombing is an act of terrorism. Walter reveals that the law office was over a huge internet hub and now there is no WIFI on the Southwest half of the country. No one can access cash, stores will shut down, traffic will come to a halt, and they will lose communication to that half of the country. Walter pleads with Cabe to let them help get the internet back up and running and catch the bomber.

They head back to the Scorpion’s lair and Walter orders a machine from Berlin that will get the internet back up and running. They hack in to the surveillance tape footage and use their software to weed out all of the people in the street and find the bomber. The only problem is, the bombed was wearing a hat and sunglasses so they can’t ID him.

Scorpion heads to the law office so that they can try to figure out where the bomber went. Paige warns Walter that that Cabe wanted them to lie low, but he is determined to prove to homeland security that they should keep Scorpion. They manage to zoom in on his keychain in the picture and find a turtle keychain, Toby recognizes it from the bar. They head to the bar and show the bartender the picture of the bomber. He gives them an address, and they head to the beach where the bomber possibly lives in a house.

The bomber comes out of his house while they are arguing over whether they should call Cabe. He sees them all standing there staring at him and makes a run for it. While Happy is chasing him on foot, Paige and Walter jump in his car to head him off at the end of the alley. The bomber pulls a gun on them and right before he tries to shoot Walter, he is hit by a bus.
Cabe and the police arrive, and Cabe is not happy. Their bomber has a broken spine and is now comatose, the other agent on duty, Thomas Keeler says he is writing all of them up for hindering a federal investigation. Cabe heads to the bomber’s house to gather evidence, and Walter begs to go with him but he won’t let him. Cabe says when he wants Walter’s help, he will ask for it.

They all head back to their office, and Paige lectures Walter. She explains that they are brilliant, but they need to start listening to orders, and if they don’t their group will most likely be shut down. Cabe arrives at the office with the bomber’s computer. The homeland security men couldn’t get through the firewall, so it is up to Scorpion to hack in to it. He brings pieces of the bombs to Happy and she announces that there are going to be more bombs going off after she looks at the pieces. Suddenly the walls shake, they all run to the roof and see buildings going up in smoke.

The geniuses hack in to the computer and learn that the files are all about a man named Frank Turner who was killed in a hit and run two weeks ago. They rush to the building where the router is hack in to the file and learn that Frank Turner sent out an email revealing that he worked for FSG and Agent Thomas Keeler is actually a spy. They realize that Agent Keeler is the one who has been setting off all of the bombs. Happy finds a bomb in the building while they are reading the file. They have about five minutes to try and deactivate it. Happy goes to work on the bomb while Toby and Paige try to clear everyone out of the building so they aren’t hurt.

Cabe and Sylvester rush to homeland security to let the director know that Agent Thomas Keeler is responsible. While they are flying down the street, Keeler sideswipes them and wrecks their car. He drags Cabe out of the car accident and holds a gun up to him and demands he hands over the file. Sylvester watches from inside the car while Keeler and Cabe fight in the the street.

Happy and Walter realize there is no way that they can stop the bomb, so they decide to use the janitor’s supplies to create a compound with salt and wet cement to slow down the explosion so it won’t take out the entire building. They have less than a minute remaining, Walter tells Happy to go on without him and stays behind with the bomb to try and mix the compound.

Sylvester climbs out of the car and finds Agent Keeler’s gun underneath. He follows Keeler and Cabe into the parking lot where Keeler is about to hit Cabe over the head with a metal pipe and fires the gun. Meanwhile, the bomb goes off at the building with the router and Walter narrowly escapes. Unfortunately, the bomb destroyed the file incriminating Keeler. However, Sylvester has photographic memory and he managed to memorize the entire file. Cabe takes Sylvester to the security office to write down everything he memorized. Paige has to go pick her genius son from school, so they all go along with her to pick Ralph up and then they head out to eat together.