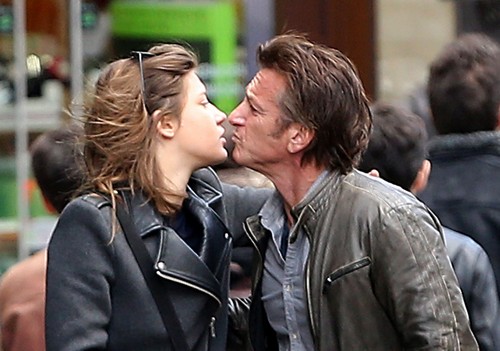 It looks like that supposedly fabulous relationship that Charlize Theron and Sean Penn were enjoying has hit the skids pretty darn fast! Supposedly Charlize’s closest friends had warned her that Sean isn’t exactly the guy that you should put a lot of trust in. I mean he has a reputation for having a great big wandering eye for a reason, right? Well, if Charlize was giving him the benefit of the doubt my guess is that a little bit of grace came to an abrupt halt this weekend after photos of Sean and a much younger hottie turned up online.

Sean was photographed having lunch in Paris with French actress Adele Exarchopoulos and it wasn’t all business either. If he tried to explain it as that to Charlize then he’ll have a tricky time explaining those kisses that the paparazzi caught as well. As he seemed to enjoy his new friend Charlize was back home taking her son to a birthday party and let’s just say that she wasn’t looking nearly as good as her supposed man.

Do you think that there’s a chance that Charlize had already kicked Sean to the curb and he had just moved very quickly to replace her? Or will the photos with Adele be the reason that she pulls the plug on things? From the looks of Charlize’s face on Saturday she already had a clue of what Johnny was up to and was none to thrilled about it! Is this couple kaput already? Tell us your thoughts in the comments below!

Sean Penn kisses French actress Adele Exarchopoulos after having lunch with her on March 22, 2014 in Paris, France – meanwhile look at how miserable Charlize looks back home in LA.