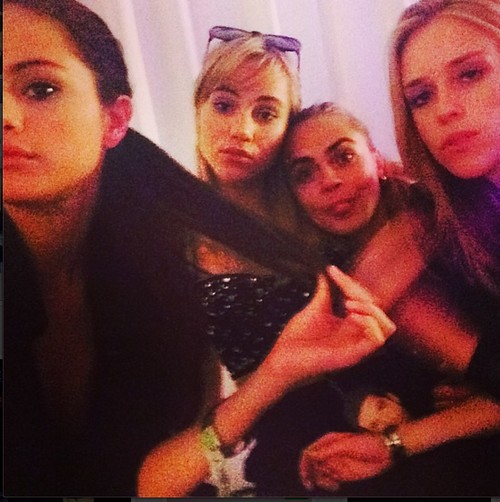 Selena Gomez may have wanted to escape the media craziness by going to Nepal, but her desire for a calm environment clearly didn’t last. She was spotted at a Katy Perry concert in London, posing for selfies with notorious party animal Cara Delevingne.

Keep in mind, it’s been less than four months since Selena reportedly checked out of rehab, and that too after a very brief stay. The girl’s also had to deal with a lot of emotional upheaval over the past few months, from her fights with her parents and family to her breakup with Justin Bieber. So her escaping to Nepal to find mental peace made sense, but this quick return to her partying ways? Not so much.

Sadly, Selena really doesn’t seem to have many strong role models in her life to help guide her path. She’s more or less estranged from her family [or at least, doesn’t seem to be on great terms with them right now], she’s broken up with her ex-boyfriend, and she’s friends with people who love to party. You think Cara and Selena are sitting at the concert, braiding each other’s hair and gabbing about their problems? Heck no. They’re getting drunk and partying all night.

We know Cara isn’t a stranger to using drugs, and the reasons for Selena’s brief rehab stint were reportedly related to drugs and alcohol. So when you put Selena back in that environment, what are you going to get? Well, a girl who wants to party and is trying to forget her problems. It’s strange, too, because we thought Selena cut the Jenner sisters out of her life because they were bad influences. But Cara is somehow better?

It’s unfortunate, but that narrative is all too common in Hollywood. We can only hope that Selena doesn’t go off the rails this time around, and maybe someone will be there to stop her. Honestly though, sources close to Selena say it’s only a matter of time before she ends up back in rehab, especially if no one intervenes soon.