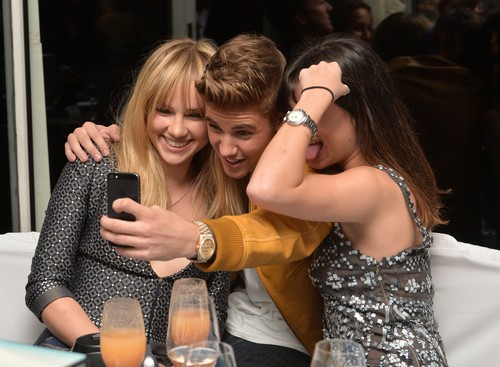 Look at that – the Internet’s most loved celebrity and the Internet’s most hated celebrity meet at the 2014 Cannes film festival in France. Of course, Jennifer Lawrence meeting Justin Bieber is also notable for being the first time that these two have ever met, but don’t be surprised if it’s not their last. According to reports, Jennifer initiated the meeting, telling her handlers that she wanted to meet Justin at the beginning of Saturday night’s Vanity Fair and Armani party at the Hotel du Cap at Cannes.

And although Jennifer reportedly declined to be photographed meeting Justin, the meet-and-greet reportedly went well enough. Of course, the fact that Jennifer refused to be photographed with Justin is pretty telling, and says a lot about how low his stock has dropped in the past year – and even more about what a snob and phony Jennifer is. In fact, I’m actually surprised they even let him into such a high-profile party, but sources claim that he was accompanied by security the entire time. Sadly, that meant no shenanigans on Justin’s part, although the same sources also claim that he walked away from the party enamored by Jennifer.

Of course, word of this meeting made itself back to Selena Gomez, who’s currently on the other side of the country. Even though Selena and Justin have technically broken up, it doesn’t necessarily mean that she’s completely over Justin – especially since their relationship ended on quite a sour note. Plus, with Kylie Jenner and Kendall Jenner, Selena would have at least felt like she got the better end of the deal. But with someone of Jennifer Lawrence’s level of stature wanting to meet Justin, Selena’s jealousy may have spiked enough that she decides to initiate a reunion with Justin. For her own sake, I hope she holds back on that impulse, but young love often doesn’t take into account common sense. Plus, Selena has nothing to worry about – in no universe would Jennifer would ever leave Nicholas Hoult for Justin Bieber. Or would she…?

Celebrities attend the Vanity Fair And Armani Party at the 67th Annual Cannes Film Festival on May 17, 2014 in Cap d’Antibes, France