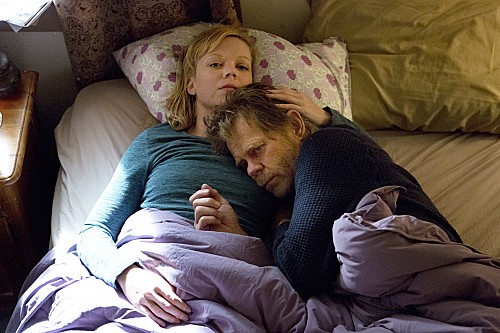 Tonight on Showtime their fiercely engaging and fearlessly twisted series SHAMELESS airs with a new episode called, “A Jailbird, Invalid, Martyr, Cutter, Retard, and Parasitic Twin.”  On tonight’s episode guardianship duties fall upon Lip – who gets some unexpected assistance.  Did you watch last week’s premiere episode?  We did and we recapped it right here.

On last week’s episode an accident landed Fiona in county jail. Frank got some sobering news.  Lip went on an big search for Frank. Fiona could do some major time even thought she pled not guilty.

On tonight’s episode Lip is faced with being the Gallagher’s guardian when Fiona is released from jail and ordered by the court to remain inside the house, and Frank continues to be out of commission due to his illness. Fortunately, he gets some unexpected assistance from Amanda, his roommate’s girlfriend.

Tonight’s Shameless season 4 episode 7 is going to be great, and you won’t want to miss it. So be sure to tune in for our live coverage of Shameless — tonight at 9 PM EST!  While you wait for our recap, hit the comments and let us know how excited you are about the new season of the Shameless?

Frank is still smoking pot in the house and the kids are worried about Liam. Sammi is trying to fit in to the family dynamic…as crazy as it is. Lip is taking over as the adult in the house.

Fiona walks in on Lip taking care of Liam. He is taking Liam to school and Fiona offers to care for him, but Lip tells her to get her *stuff* together and walks out.

Carol gets teased on the bus about Liam’s overdose from some bullies.

Kev is having a bad day as the city workers are doing next to nothing. He takes out his anger on them then walks in only to get robbed of a keg by some kids. He manages getting out despite being tied to a chair. The workers do nothing to help him.

Lip goes to his dorm and is talked into letting Liam stay with his dorm mate. He tells her he is really scared to leave him, but she assures him everything will be okay. Fiona is back in court facing charges of possession and child endangerment. They are asking for 5 years in prison. The judge asks the DA and Fiona’s attorney to work something out and come back with a plea deal.

Fiona’s attorney asked for 3 years probation. She may still get 3 months of jail time even if she pleas guilty, but she’ll get off much easier. Fiona is seriously upset.

Deb is back with her ex and is trying to find something to make him for dinner. Her classmate gets to school late and Deb asks why. The pregnant friend is having some major drama and ended up cutting herself.

Veronica finds out she lost one of her triplets by a pretty cold doctor. Mickey attempts to find Ian by visiting the club he used to work at. Lip is stealing food for the house. After an argument with Sammi, Frank begins getting very sharp pains. He doesn’t want to believe his time is limited. When Frank gets mad at Sammi she becomes very upset and feels so guilty that she ends up providing him with the drugs he so wants….heroin. Carol beats up the two bullies that were teasing him earlier.

Deb gets into her “boyfriend’s” place to make him dinner. He shows up and gets upset and reminds her they broke up. She is confused because he was there for her when Liam was in the hospital. She is upset and takes off. Later, she resorts to cutting after getting the idea from her friend. Mickey finds Ian in a gay club giving lap dances to men. Ian is high as a kite so Mickey waits to take him home once he’s passed out on the street since he wouldn’t go willingly.

Frank gets caught passed out on heroin and is kicked out of the house. Sammi, desperate for a relationship with him, leaves with him and they break into Sheila’s house to stay while she is away and end up in the shower together as Sammi helps Frank after he collapses.

Lip and Fiona have a major blowout and he tells her she is guilty. She ends up entering a plea of guilty and seems very shaken when the judge goes over the terms of what her guilty plea means. She is on house arrest and has her ankle monitor device placed on her in court. She happily gets no jail time.