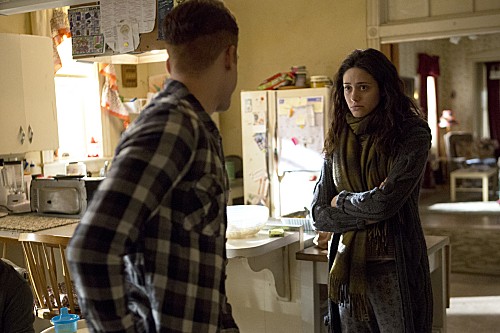 Tonight on Showtime their fiercely engaging and fearlessly twisted series SHAMELESS airs with a new episode called, “Hope Springs Paternal.”  On tonight’s episode Ian gets kicked out of Mickey’s house by a hammer-wielding Svetlana and makes a long-awaited return to the Gallagher house. Did you watch last week’s premiere episode?  We did and we recapped it right here.

On last week’s episode Lip was faced with being the Gallagher’s guardian when Fiona was released from jail and ordered by the court to remain inside the house, and Frank continued to be out of commission due to his illness. Fortunately, he got some unexpected assistance from Amanda, his roommate’s girlfriend.

On tonight’s episode to prepare for a visit from her probation officer, Fiona must remove all paraphernalia from the house; Ian is kicked out of Mickey’s house.

Tonight’s Shameless season 4 episode 8 is going to be great, and you won’t want to miss it. So be sure to tune in for our live coverage of Shameless — tonight at 9 PM EST!  While you wait for our recap, hit the comments and let us know how excited you are about the new season of the Shameless?

Fiona rids the house of all suspicious items to prepare for a visit from her probation office, but her efforts aren’t appreciated by Debbie and Carl. Meanwhile, Ian gets kicked out of Mickey’s house by a hammer-wielding Svetlana.

Tonight’s episode opens with Deb getting her period, Fiona making cookies, and the kids being told to make sure everything is perfect for the probation officer visit. Frank and Sammie are together and Frank looks to be on his last legs as he seems to be fading in bed. Frank, on his deathbed, is still trying to find a way to make money for his surgery. He pulls himself up just enough to do a line of coke.

As Lip is working, serving food, he is complimented and receives a phone number from a girl who thinks it is very sweet that he has is caring for his little brother and has him with him. The probation officer arrives and has a lot of questions for Fiona. She tells Fiona she cannot leave the house for another 5-10 days, likely. After the PO warns Fiona what will happen if she leaves the house, then asks for a urine sample.

Ian wakes up with Svetlana looking at him. While in the shower, Svetlana follows him with a hammer and tells him he needs to leave and shouldn’t plan on staying the night. Ian arrives back at the Gallagher home to Fiona’s open arms. When Fiona starts talking future plans and school, Ian storms out saying he doesn’t want to have to do what anyone else tells him to do.

Carl is called to the office and asked why he has beaten up so many children. He gets suspended and has to come back with a parent to face the students he victimized along with their parents.

Back at home, Fiona still tries to ensure a normal life and seems as though she is successfully running the show. Carl and Deb walk in when Deb shares that Carl was suspended. Carl shares that he needs to appear with a parent, but Fiona can’t leave tso Lip tries to figure something out. Sammi comes to visit and requests the kids visit Frank because he shouldn’t die without his family seeing him. She isn’t welcomed as the family harbors a lot of resentment.

Meanwhile, Ian gets Mickey to give him a little pleasure, while Deb returns to her room to see her “countdown to losing her virginity” in the trash, complements of Fiona. Fiona searches the house for loose change and money. She runs outside for a cigarette and tests her limits with the ankle bracelet she is forced to wear. Everyone seems upset with Fiona and it is starting to show. Carl and Deb go to Sheila’s house to visit Frank.

Lip prepares his friend to sit for Liam while he is in class. She compliments him on how well he takes care of Liam. Lip meets up with the girl from lunch the other day but explains he is in no position for a relationship. Fiona goes on a cleaning mission at home. Robbie comes over to see Fiona, but his intentions are not so genuine. While he says he is checking on her, he really just wants to know if she told the police that it was his coke.

Vee brings Fiona some alcohol after she begs for an escape. She and Fiona hang out. Lip walks in and smells something burning. The girls begin laughing and Lip sees the empty alcohol bottles in the house. Lip lays into her for being so irresponsible as the kitchen is filled with smoke. Fed up with Fiona, Lip takes everyone out. Meanwhile, Sammi opens Sheila’s home to sell all the belongings within it for…cash only to raise some money for Frank. Deb stays with Sammi and Frank, Carl and Liam go to college with Lip, Ian is still working and hooking up at the club, and Fiona is left alone. Sammi and Deb bond as sisters.

Carl loves the college party life and is living it up with all the students at a party. Meanwhile, Svetlana is in labor and Mickey is away with Ian, finally admitting that they’re together. They pass out and end up staying all night at the party. Lip’s roommate’s girlfriend “thanks” him by hopping into bed, surprising him under the sheets.

At the hospital, after Vee’s mom gives birth, she has a hard time giving up the baby because she’s so bonded. Vee tells Kev they should let her keep it and she and Kev will still have the two. Kev held his son and doesn’t want to let him go. Kev finally relents, but is completely heartbroken.

Fiona calls Lip at college and breaks down sobbing that she wants her family back. Frank and Sammi show up at school with Carl as requested by the principal and Frank lectures the kids on how they’ll end up so much better off from being bullied, while his son will likely end up in jail.

At the house Lip brings Liam home and Fiona is woken up by Liam’s hand touching her face. Carl pulls one over on the principal by pretending he learned his lesson, only to walk off and punch a kid for his lunch money.