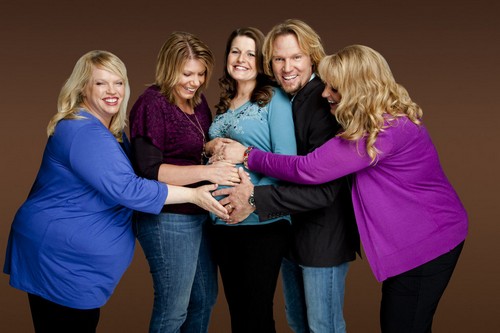 TLC’s reality show SISTER WIVES returns tonight with it’s second episode of season five.  Tonight’s episode is called, “Polygamists in a Shark Tank” and on tonight’s show a plan to hire employees for their jewelry business has the Browns searching for investors. Meanwhile, Robyn considers having another baby; and Meri mulls going back to school.

On the last episode, the Browns faced a chaotic week. They had a meeting with a potential investor for their jewelry line. Christine’s daughter Mykelti brought a boyfriend home. Lastly, Meri dropped a bombshell that threatened her close relationship with one sister wife. Did you watch last week’s episode?  If you missed it we have a full and detailed recap, right here for you.

On tonight’s episode the Browns’ jewelry business is beginning to overwhelm the wives. Robyn wants to have time for another baby and Meri wants to go back to school. Needing to hire some employees, they’ve turned to investors for money. But will their pitch sink or swim?

We will be covering Sister Wives tonight at 9 PM EST so don’t forget to come back to this site for our full and detailed recap.  Make sure to refresh often to get the most recent details.  While you wait for the recap, let us know how excited you are about the new season of Sister Wives.

The Sister Wives are back this season with a new set of problems. Not only is their emerging business currently at a standstill, but one of the wives is slowly pulling away from the family. And only Robyn can see it.

Amidst their business woes, Meri has been going back to school. She no longer has a kid at home and right about now would normally be the perfect time to explore new ideas and sort of find yourself all over again. Yet Robyn doesn’t want Meri to find herself outside of their family dynamic. She’s worried about how the relationships and experiences Meri will gain by going to school will impact their lives. And to be honest she never understood why Meri even wanted to go back in the first place.

It felt like she was abandoning the family business to concentrate elsewhere and it freaked Robyn out. She knows the family is struggling to be a team and Meri’s decision is only making it harder. At least in her eyes.

The family went to their therapist for help. They needed to find a way to get all of them back on the same page about their business and funnily enough their therapy session ended up opening some old wounds rather than bringing them closer together. They need Kody to step in as a leader for Sister Wives’ Closet and he doesn’t necessarily feel like a leader of his family so how is he going to run the business. So far the business has been Robyn’s baby. She’s the one focusing on it day in and day out. Meanwhile, the rest of them don’t even know their roles or what part they should play in the grand scheme of things.

Janelle was hurt that time Kody called Robyn the CFO. It made her feel invalidated however it was just last year that both she and Christine tried to pursue a career outside of the family business. Back then they said the jewelry line wasn’t their concern. It was Robyn’s and they didn’t feel the need to interfere seeing as she had Meri for help. But now that they’re focus has changed then they want to feel like they have an equal say. And that’s why Kody really needs to take charge and why his wives should let him. No wife should be in the position of feeling like she can one up one of the others!

Their investors meeting is coming up and the family had to prepare for it together. And that means everyone is going to have a part to play. Even Meri. She probably knows the business better than say Robyn, but her fear of public speaking can sometimes be paralyzing.

They were doing run-throughs of their pitch and Meri kept shaking and Robyn kept tripping over her words in between the time she wasn’t crying and/or close to tears. Though run-throughs aren’t always fool proof of how the meeting is going to go. Take Christine for instance. Christine was great …back when they were practicing at home. But put in a room filled with potential investors, her nervousness came across just like everyone else’s.
It was a scary experience.

The Brown Family had to state why their business was important and how it could be profitable. Sure, they should have spent a little bit more time getting prepared but they did their best in the short time they had. And yet there were still some issues with they presented.

The investors might have only stayed seated because the main investor was a friend of the family. So it makes you wonder – what if there wasn’t a friendly face there? Would the investors really have gotten up in the middle of the presentation and walked out?