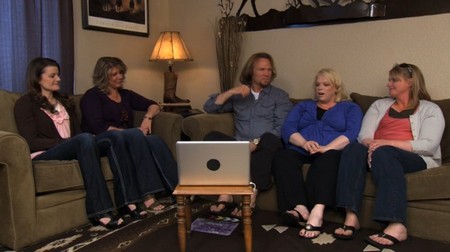 TLC’s reality show SISTER WIVES returns tonight with its eight episode of season five. Tonight’s episode is called, “Tell All” and on tonight’s show No topic is off limits as Kody and his wives tackle all of the tough and uncomfortable questions about the season.

On the last episode, Kody, his wives, and all of the children worked to compile photos and videos that brought new life and new understanding to the family. Insightful details and shocking secrets emerged to give an even deeper look into what made this family so extraordinary. Did you watch the last episode? If you missed it we have a full and detailed recap, right here for you.

On tonight’s episode No topic is off limits as Kody and his wives tackle all of the tough and uncomfortable questions about the season. The older kids enter the mix to reveal a new interest in Logan’s life, as the youngest kids open up about their TV lives for the first time.

We will be covering Sister Wives tonight at 9:30 PM EST so don’t forget to come back to this site for our full and detailed recap. Make sure to refresh often to get the most recent details. While you wait for the recap, let us know how excited you are about the show.

Tonight’s episode of Sister Wives is a special tell all episode hosted by Tamron Hall. Kody, Janelle, Robyn, and Meri join Tamron on couches for the episode tonight. Meri is in the hot seat first, and Tamron wants to talk about when she shocked Kody and the rest of the wives by announcing she was going back to school. She confesses she was super nervous to tell Kody because she felt guilty that they are working so hard to put their kids through school financially. Kody was happy for Meri, Robyn on the other hand was not impressed. Robyn felt like Meri was ditching her, she is scared that Roby was going to make friends at college and not want to spend any time with her anymore. Christine thinks that Meri going to school is a good thing. If she goes back to school, she will be more emotionally engaged with them family, because she will be happier about herself.

Up next Kody and the wives discuss the Brown kids dating this season. Kody sat down with Mikelty and her boyfriend and told them that when they kiss, they are spitting hormones in to each other’s mouths, and then if they break up they will be heart broken. Kody argues that “we live in a world of train wreck relationships” and it is because people are having sex before they are laying down a foundation for their relationship.

Tamron tackles the Brown Family’s finances next, and asks whether their company Sister Wives’ closet is a crucial part of their financial success. During the season Kody said that none of the wives could run the company, it had to be ruled by committee, and the wives elected him as CEO of their company. However in one particular scene, Kody breaks down and throws a fit and argues that he isn’t even in control of his family. Kody explains to Tamron that whenever they make a major decision, he has to go to each wife and get their opinion and try to sell them on the idea, and it is exhausting. Kody says the real trick is “finding a world where every one’s needs are met.”

During last season Kody and his wives pitched their company Sister Wives Closet to a team of investors, afterwards they got some bad news. The investors told them that they were going to fund them, however the money never came through. During their pitch Christine mentioned that they “didn’t want too much money because it might make them lazy,” the wives think the investors took her wrong, and don’t blame her for the deal falling through.

Tamron asks Kody how well he is doing dividing his time up evenly. He says it’s not going well, and at least every week one of his wives complain that he isn’t spending enough time with them. All four women confess that they have all told him that recently. Kody argues that there just isn’t enough time in the day.

Next they discuss something a little less serious…Kody’s infamous hair. Christine and Meri perfair his hair just long and scruffy. Meri made him straighten his hair like Keith Urban once, but she says it “only works for Keith Urban.” On the other hand, Robyn and Janelle prefer his hair in a pony-tail.

Next Tamron sits down with some of the Brown Family teens, and she says that she has been watching them on social media. Logan says he “doesn’t do much on social media.” Tamron begs to differ, and shares shirtless pictures that Logan posted on Instagram. Hunter also posted a picture of himself on Twitter holding two different girls’ hands and commented “starting young.” Hunter laughs that it was just a joke and he has no intention of having more than one wife. Aspyn, Mikelty, Mariah, and Logan agree and claimed that they will not be practicing polygamy either.

Tamron shares the funniest clip of last season next, Kody tried to empty the sewer tank on the RV and sewage began spraying all over him. While the wives and Kody are laughing at the clip, Christine excuses herself from the couch and walked off the set for a moment. Tamron reveals that while they were filming the tell all episode, she asked Robyn about trying to get pregnant and having another baby, and it really upset Christine – causing her to walk off set and pull her self together.

Before the tell all episode comes to a close, Tamron asks Kody if he plans to take on a fifth wife. He and his wives agree that they don’t think it is in the cards.