BY Kristine Francis on August 7, 2014 | Comments: one comment
Related : Reality TV, Recap, So You Think You Can Dance, Television 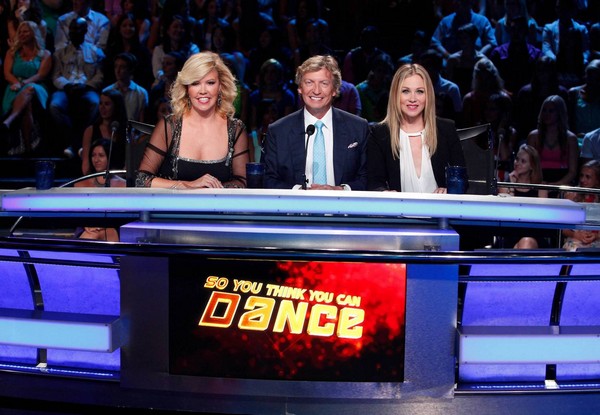 Tonight on FOX, SO YOU THINK YOU CAN DANCE continues with a new episode. On tonight’s episode the top 10 dancers perform with All-Stars from previous seasons, including Stephen “tWitch” Boss, Lauren Froderman, Kathryn McCormick, Ade Obayomi and Amy Yakima. Tara Lipinski is the guest judge. Also: Christina Perri performs “Burning Gold” from her second album, “Head or Heart.”

On the last episode of SO YOU THINK YOU CAN DANCE, the top 14 finalists performed for the nation again before learning which dancers would be ending their journeys. The dancers that were sent home were Serge, Teddy, Carly and Emily.Did you watch the last episode? If you missed it we have a full and detailed recap, right here for you.

On tonight’s show this season’s top 10 finalists perform with returning SO YOU THINK YOU CAN DANCE all-stars before learning which dancers will be ending their journeys. Tune in to see if your favorites make the cut and who is sent home, as well as a performance by special musical guests in the all-new “Top 10 Perform, + Eliminations”

Tonight for the first time the contestants will all be dancing with new partners. And not only are their new partners extremely qualified, but the newbies will either have to keep up with the returning So You Think You Can Dance all-stars or risk going home next week if not today.

Because unlike before, where the contestants knew whether or not they were in danger of elimination prior to dancing; they won’t be given their results from last week until after they perform. So everyone has to be on their best game or else they’ll risk their chances of winning by getting cocky!

The opening dance, choreographed by the esteemed Jamal Simms, was an upbeat fun number and thankfully that provided a great leeway into Bridget’s dance as she performed something called Bollywood Disco with returning all-star, Brandon. As for her dance, it was literally created right on the spot so there was also no set standard to uphold her to. It was all brand new and that could have hurt Bridget’s chances if she didn’t know how to sell this unknown brainchild onstage. However, for a new dance it was executed to the enjoyment of both the audience and the judges.

Everyone was jumped up excited about it. So much so that Nigel couldn’t help making fun of Mary’s expressive hand gestures. Although, that sadly did not change the fact that Bridget is one of the girls stuck on the bottom this week.

Next up was Tanisha and she had to dance the steamy and passionate Argentina Tango with returnee Ryan. And just like everyone time we’ve seen her (and like Nigel mentioned) she never had placed a single wrong which something of grand accomplishment for a dancer. It shows that whatever she’s done – she always made sure it was top quality.

Tanisha is safe this week but the same can’t be said about Emilio. His dance this week was more about redeeming himself than continuing his great work. He had been paired with Jasmine and the two of them were going to be dancing Hip Hop. Now, the last time Emilio did Hip Hop it landed him in the bottom two and this week after finishing a stellar performance worthy of erasing his past mistakes – he found out it could have all have been for nothing.

Emilio is in jeopardy. He’s one of the two guys in the bottom and that means they are at least two more people at risk. One more girl and one more guy!

Valerie, sweet and bubbly Valerie, was given a tough task this week. After only seeing her as the happy go lucky gal onstage – she was given a dance to make her look more dark and mysterious. Yet the makeup, the dance, the song, and even the partner couldn’t change her true nature. Once she was finished with her dance each of the judges shared the same complaint – the dance didn’t fit her.

She failed to sell the story behind the dance and rather than leave the judges demanding for more – they told her that she couldn’t be known for merely one type of dance.

Rudy and Jenna had to dance the Cha Cha and normally that’s considered a sultry dance but Rudy’s natural exuberance turned a sexy dance more into a campy dance. He was winking and smiling like the lovable goon he is and yet the reason the judges mainly didn’t find a problem with it is because his footwork was on point and some if not ¼ of it sold the story. So no wonder he’s safe – the judges can’t even fault him for pulling a Valerie on them.

Jacque had to dance a contemporary ballet this week and it was another first for the show. Like in the case with Bridget, much was expected from her for introducing a new dance to everyone. And, though, she did end up performing it so well that captivated the audience into complete silence – it couldn’t miraculously change the results from last week. So Jacque is unfortunately the other girl up for elimination.

Jessica doesn’t even have to worry about her scores – she knows she’s safe this week.

As for Ricky. Was there ever honestly a chance he would be up or elimination? He’s a typical fan favorite as well as one of the best dancers this season. The judges even went as far to refer to him as perfect. And so when he danced jazz with Lauren it was once again flawless to literally the surprise of no one. Hence he’s safe.

Then there was Casey and Kathryn who did a turn with Broadway. Broadway dances tend to need more showmanship than regular dances so it was up to Casey to act his way through a very skilled dance but it’s not like Casey wasn’t up for the challenge!

He was so good that the judges loved him. Notably, Mary and guest judge Tara wanted to stay in love with him. Although with his stellar performances both this week and last week – his safety was of course guaranteed and that means greats things for him (and his groupies) that also leaves Zach. With Casey safe it’s suddenly made aware to him, prior to stepping onstage, that he’s in danger of elimination.

Zach was the last dance performance of the night and he had to do a contemporary dance based off of someone losing a close friend of theirs and it was up to him to play the dearly departed friend. So the dance had to be moving and soul wrenching. And more importantly it had to be a dance capable of saying “if you send me home then you’re going to regret it”.

And it did that. No one was expecting a tapper to make it into the top ten and he surprised everyone by doing just that. Yet will it be enough to save him this week? It took Jessica ages to show her potential (according to Nigel) and so there’s always a chance for Zach!

So what the results from last week’s performances? Well, apparently, people saw the talent in lying in wait for Zach and they noticed the same thing in Jacque but the same couldn’t be said for Emilio or for Bridget. They will have to say their goodbyes this week and return home – thanks for playing!