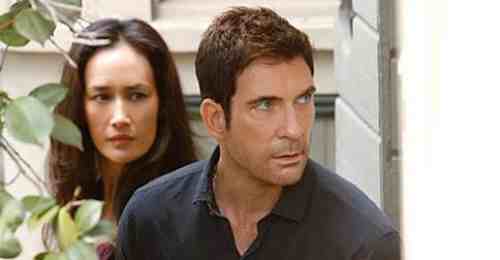 Tonight on CBS Stalker starring Dylan McDermott continues with an all new Wednesday October 8, season 1 episode 2 called, “What Happened to Baby James.” On tonight’s episode Beth, Jack [Dylan McDermott] and the Threat Assessment Unit (TAU) investigate after a teenaged girl has a stalker break into her house, but quickly realize that she is not the one being targeted.

On the last episode, Threat Assessment Unit’s Lt. Beth Davis and Det. Jack Larsen search for a stalker with an affinity for fire. Also, Beth meets with an exasperated college student who claims his former roommate is aggressively harassing him. Did you watch the last episode? If you missed it, we have a full and detailed recap right here for you.

On tonight’s episode Beth, Jack and the Threat Assessment Unit (TAU) investigate after a teenaged girl has a stalker break into her house, but quickly realize that she is not the one being targeted. Meanwhile, Perry pays Beth an unsolicited visit at work.

This is definitely one series that you don’t want to miss. Don’t forget to stay tuned to Celeb Dirty Laundry where we will be live blogging every episode of Stalker.

Tonight’s episode of Stalker begins with a teen girl named Hannah on the phone with her friend, she swears to her friend that she has a stalker and she thinks someone is in her house. She tells her friend to stay on the line and heads downstairs to investigate. She finds her living-room door wide open, she shuts it and locks it, and then realizes someone is in the house with her. She grabs her little brother Thomas and runs out of the house screaming, they run right in to someone

Lt. Beth Davis wakes up the next morning and goes out to coffee with her friend. She reassures her friend that her ex is in jail and she needs to start going out and dating. Beth receives a phone call from work and says that she has to go.

Det. Larsen arrives at work with coffee, Beth tells him not to buy her coffee and if he wants to make a good impression he can stop barging in to her office. Det. Lawrence gives him a tour and shows him where his desk is. Beth sends him a stack of their old case files and wants him to study them.

Beth receives a phone call about Hanna, and she and Janice and Jack head out to investigate. She tells them what happened last night and explains that she ran outside and bumped in to her neighbor who called 911. Hannah says that she has felt like someone is following her for a few weeks now. Beth tells her to make her a list of all of the times she has seen someone following her or in her backyard. Outside, Jack talks to Hannah’s brother Thomas while he takes pictures of footprints in the backyard. He notices a treehouse in the back yard, Hannah’s mom says her husband Tom built it for Hannah when she was little, but he passed away a few years ago. Jack climbs up inside of it and finds food wrappers and a blanket.

Beth gets a phone call and learns that there is a registered sex offender named Barnes that just moved in to the neighborhood four blocks away from Hannah’s house. They head over to Barnes’ house and find a creepy room full of pictures of Hannah. They bring him in for questioning, and Barnes insists that he is “better now” and he has coping skills to curve his impulses. He insists that he “looks but he doesn’t touch.”

DA Amanda Taylor arrives and Beth introduces her to Jack Amanda is the same woman that Jack was watching before he went to work. He follows her to the elevator and tries to talk to her but she says it is disgusting that he got assigned to work with her in LA. Meanwhile, Beth is annoyed when she sees Harry waiting for her in the office. They go in to her office, he apologizes for harassing Eric and then tells Beth that he needs help and he knows it. He says there is a part in his head that makes him obsessed with people and it is like a drug. Beth gives him a card for a therapist and says that he will be able to help him.

Jack doesn’t think that Barnes is their guy, because none of the photos that Barnes took were taken from the tree-house. They realize that whoever was in the treehouse was watching Hannah’s little brother Thomas, not her. Beth calls Hannah and Thomas’s mom, and tells her to check on Thomas. She searches the house frantically and realizes that Thomas is missing.

Beth and her team arrive at Hannah and Thomas’s house, and reassure their mom that they are going to find Thomas and bring him home safe and sound. While they are looking around the house they find a toy squirt gun, Hannah has no idea where it came from and neither does her mom. Beth searches Hannah’s room and finds condoms, she demands to know who Hannah has been having sex with in the house. Hannah confesses that she has been sleeping with a tattoo artist named Victor.

They bring Victor in for questioning, he confesses he gave Thomas a squirt gun because he was a good kid. Victor says that he wasn’t the stalker, he seen someone in a silver or gray sedan parked in front of Hannah and Thomas’s house all the time and the driver was wearing a hoodie. They find a picture of a silver car in Barnes’ pictures. They run the plates and learn that it belongs to one of Hannah’s neighbors, Rosemary Wilson.

Meanwhile, Rosemary has Thomas in the trunk of her car. She keeps calling him James and says that he is her son. She leaves him in the trunk and heads in to a house, a woman finds her walking around and demands to know why she is in her house. Rosemary screams that it is her house and hits her over the head with a vase.

Janice does some research and learns that Rosemary’s real name is Judith, and she had a son that was Thomas’s age and drowned and died. They bring her ex-husband Derrick in for questioning, and he admits that he doesn’t think Thomas’s death was an accidental drowning. He gives them the address of the old house where he and Judith lived with their son before he died.

Jack and Beth head to Judith’s old address and can see Thomas inside with Judith. Beth goes inside and pretends to be her neighbor, the jig is soon up and Judith knocks a shelf over on Beth and Thomas runs away. Judith chases after him, Beth and jack find her about to stab Thomas in a bedroom. Beth is able to talk her down and get the knife away from her. Paramedics arrive and tend to the woman that Judith hit over the head, and Thomas’s mom and Hannah rush to the house to get him. Judith is handcuffed and whisked away in the back of a patrol car.

Back at the office Janice invites Jack out for drinks, but he turns her down and says he doesn’t want to be “that guy.” Ben jokes that Jack just rejected Janice, but she doesn’t mind she thinks it makes him more interesting. Jack tracks down Amanda, and begs her to talk. He says he hasn’t come to ruin her life, he just wants to get to know his son. Amanda says that he is not worthy of meeting her son, and if he doesn’t transfer out of LA in the next two weeks, she will go tell his boss his dirty little secret that nobody knows but her and ruin his career.