BY Stormy Elizabeth on May 5, 2014 | Comments: one comment
Related : Recap, Television 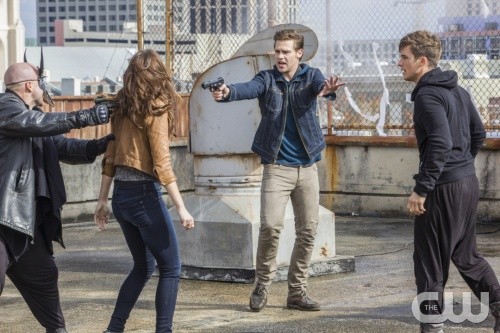 Tonight on the CW Star-Crossed returns for another new episode. In “This Trick May Chance to Scathe You,” Roman and Drake learn that the Trags are building a bomb, so they ask Grayson for help. Meanwhile, Emery turns to Sophia and Lucas for assistance smuggling the bomb out of the sector, a task that endangers all their lives; and Teri continues her mission.

On tonight’s episode Roman and Drake team up with Grayson – After Roman (Matt Lanter) and Drake (Greg Finley) discover the Trags are building a bomb known as a Suvec, they realize they need help and turn to an unexpected source – Grayson (Grey Damon). Emery (Aimee Teegarden) enlists Sophia (Brina Palencia) and Lukas (Titus Makin Jr.) to help them smuggle the Suvek out of the sector, which ultimately puts all of them in danger. Meanwhile, Teri (Chelsea Gilligan) continues her mission. Elizabeth Allen directed the episode written by Brian Studler & Samantha Stratton.

Tonight’s episode is going to be exciting for sure and you won’t want to miss it. We’ll be recapping it right here for you as well. Tune in at 8 PM EST to the CW for the latest episode of STAR-CROSSED and in the meantime hit up the comments and tell us your thoughts on this new show!

While the city prepares for Mardi Gra, Roman and Drake are desperately seeking ways to stop the Trags from using the Suvek. And although Roman doesn’t like it – Grayson is their best option. They tried blowing the Suvek up on their own and it didn’t work so their next best option is Emery’s plan. Because, apparently, Grayson and Emery do almost everything together now. Even diffusing bombs!

Emery wants to smuggle the bomb out on one of the Mardi Gra floats. She got special permission to build a float inside the sector and now all they have to do is get hold of the Suvek.

Yet there are internal problems within their merry band of soldiers. Grayson and Roman don’t like nor trust each other. And having Emery around the both of them is only serving to antagonize the guys.

Once the teenagers are all inside the sector they then had to find the hideout. Roman wanted to go in search of it and so did Emery. But Roman wouldn’t allow her to go with him. Her face would have been too recognizable. Which is why Grayson volunteered. He said he could be of more use to Roman. Though on the other hand his need to help tends to conflict with his jealousy about Emery.

Emery wants to be a build a strong bond between Atrains and Humans in order to get Roman back one day. However she isn’t subtle about her long term plan and that causes Grayson to border on revealing the Trags to the rest of the world. And he contemplates that out loud just to get on Roman’s nerves.

As it turns out, Emery was the one that revealed the Trags’ plan. Though she only told the guards where they could locate the dissidents.

The kids were hoping the Trags would rush up their plan by moving the bomb and it worked. Roman and Grayson saw the bomb on the move, but Roman wanted to wait till Drake came back to pursue a course of action…Grayson disagreed! After a few punches, Roman went ahead with the plan rather than wait on Drake.

Drake needed a way to destroy the Suvek and he thought he could go to his mother for advice. He hoped that she only built the bomb because she was scared about the Trags yet Saroya appears to be a firm believer of the Trag doctrine. Or so it seems after she knocked out her own son thereby stopping him from helping his friends.

When Drake cam to, he was tied up. His mother explained that she built the bomb to with a safeguard. That’s why she can’t make him face down the Trags along with his friends. If he goes to join them then he will die. She set up the Suvek to kill anyone within a certain amount of distance.

Saroya would do anything in order to not lose her son and Drake told her that she will lose him anyways if he can’t be there for his friends. He said that he would never forgive her so Soraya let him go. She allowed him to do what he felt was necessary.

Drake arrived as his friends were moving the Suvek. He warned the about the safeguard his mom had put in place. She can shut it down, but it’s going to take some time. And that don’t really have that. The Trags found them as they were on the move.

They managed to escape the Trags with the bomb and back at the sector – Saroya disabled the Suvek. Later she attempted to escape the sector with her son, but he finally told her why integration was so important to him. He needed to stay and fight for a chance to be with Taylor and their baby. And though his mother understood – it broke her heart. Drake promised that he would see her again and for now that’s just what they have to live with.

The Suvek was supposed to be taken to a safe place where no one could use it to harm. But on the way to taking it to Gloria – Grayson was attacked. The insufferable Zoe reappeared to knock him out and steal the Suvek.

And back at the sector, Castor finally struck. He stabbed Roman with a poisoned blade. He thought Teri has rebelled against her mother and that she was fully aligned with him and his beliefs. Yet when he proved to be of no more use to her – she stabbed with his own blade. The same one he used on Roman.

Teri pretended to be as ruthless as he was to get her hands on his device, but all along she was working for her mother. Now Teri knows what happened to Roman and she could help him.

But does she wants to?