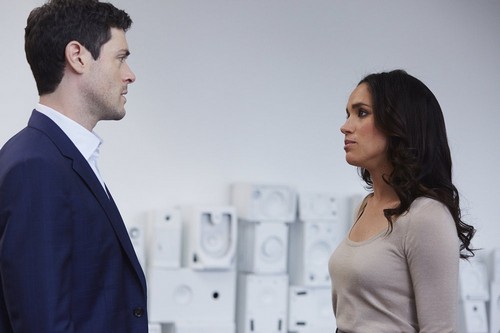 SUITS returns to the USA network tonight with an all new episode called, “Two in the Knees.” On this evening’s episode, Logan Sanders pushes Harvey to prove his relationship with Mike will not hinder business.

On the last episode a takeover battle pitted Harvey and Mike against one another, and the situation was only complicated further by Mike’s relationship with Rachel. Elsewhere, Louis partnered with recent SEC defector Jeff Malonein. Did you watch the last episode? If you missed it we have a full and detailed recap, right here for you.

On tonight’s episode Logan Sanders, a client of Pearson Specter, looks to Harvey to confirm that his relationship with Mike won’t prevent them from winning the takeover battle. Elsewhere, misunderstandings arise between Louis and his new colleague Jeff Malone.

Tonight’s episode looks like it is going to be great and you won’t want to miss it, so be sure to tune in for our live coverage of USA Network’s “Suits” at 9:00 PM EST! While you wait for our recap hit the comments and let us know how excited you are for another episode of Suits tonight.

Mike truly is trying not to let the fact his two favorite people in the world are working for Logan bother him. But there have been moments of doubt. Logan used to date Rachel and Mike needed to her from her own lips who ended it – apparently she did though that hasn’t done much to make him feel better. He doesn’t like Logan and he has every reason to feel that way. Logan is a jerk!

He’s not content with Harvey and Rachel essentially winning this case for him. It looks like he wants more than that. Logan is bent on destroying Mike in the process because he didn’t like how long his corporate takeover was taking. Or so he first claimed when he practically ordered Harvey to play hardball.

Yet, that wasn’t the truth and Harvey didn’t like Logan’s real motives. Logan wants to destroy Mike just so he can get Rachel back. Once Harvey saw through that ploy he knew it was already too late for Mike. Logan is going to go looking for secrets and Harvey had to say he would find dirt. He’d rather Mike go down on his own terms than on Logan’s.

Meanwhile, Louis found a way to butter up Jeff. His first plan was offering the other man his other ticket to the ballet. It was kind of him but Jeff preferred using his Knicks ticket. So Louis came right out and asked Jeff what would he need to make it all better and Jeff said he needed Jessica’s corroboration.

That dirty trick worked in his favor, seeing as Louis went running to Jessica afterwards using every puppy dog eyes he had in his repertoire in order to get her to work with Jeff. Although Jessica wasn’t too pleased to find out that Jeff has been manipulating Louis. Everyone knows how susceptible Louis is to flattery and later Jessica tried to play on it to get off of working with Jeff.

It was all three of them pulled in on the SECC case and both Jessica and Jeff tried to use Louis to score points off each other. However, their battle of double entendre happened to fly over Louis’s head and now …he thinks Jeff is interested in him.

Louis went to Donna with his problems and then when she failed to help him find a solution he tried to work out his problems with Jeff on his own. He told Jeff that though he felt complimented – he wasn’t interested in Jeff for anything other than friendship. And to get rid of the awkwardness he was going to stop working the case with Jeff. Which leave Jeff and Jessica alone. Like Jeff wanted all along!

Harvey got Mike fired from his job. He told Mike’s employer about Mike’s former drug usage and out of spite Mike took something from Harvey that was virtually irreplaceable. He bought up on all the songs Harvey’s father did during his solo days.

Harvey had been trying to get those songs back since his father’s death and Mike doing what he did could have ended whatever friendship still remains. But Donna and later Rachel stepped in and salvaged as much as they could. Mike was going to use those tapes to get re-hired and after the ladies stepped in and ease down the fighting testosterone – Mike was willing to let certain things go.

Rachel confessed that she broke things off with Logan and she did. Though she left out the part that she lied in court for him saying he was the one ending things. She did this because he wanted to get back his ex, so he owes her from that. Rachel got Harvey’s father’s song and she got Logan to lay off Mike.

It seems as if she could have fixed all of this from the get-go. Save for Mike’s relationship with his boss everything else was fixed. Mike is a partner in the company and he’s going to keep on fighting off Logan’s takeover even though his former boss no longer wants him to.

As for Louis, he found out about Jeff and Jessica and he was so hurt by it. For a second there he thought he had found a real friend.