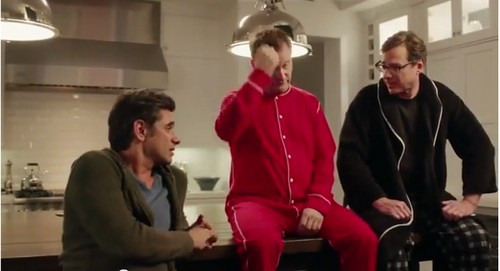 As one of the most beloved shows from the early 90s, Full House will always have a place in pop culture history. It’s best known for launching the careers of Bob Saget, John Stamos, and of course, the Olsen twins, but the show itself is still beloved by many people.

A reunion between the cast members has long been debated, but it has unfortunately never materialized – until now. In a surprising Super Bowl commercial for yogurt [specifically, Dannon Oikos], Bob Saget, Dave Coulier, and John Stamos are reunited in the 30-second advertisement clip.

The video starts off with John Stamos eating a Dannon Oikos yogurt and watching a football game [of course]. Then, the camera moves over to Dave Coulier and Bob Saget watching him from the kitchen, which is followed by them asking, “Don’t you think it’s time we all get our own places?” Immediately after, everyone simultaneously responds, “Nah.”

Apparently, Dannon Oikos is planning having a series of ‘on-air bromances’, which will probably feature famous bromances from major television shows and movies. But what’s really notable about this clip is that it’s the first on-screen reunion between Saget, Stamos, and Coulier, believe it or not. You’d think the three faces would have been reunited in some other manner since the show ended its run, but apparently not. Anyway, all three of them are reportedly good friends, so this was probably a great opportunity to do something fun without committing to anything bigger.

What do you guys think about the commercial? And better yet, have you ever heard of Dannon Oikos before this? Let us know in the comments.