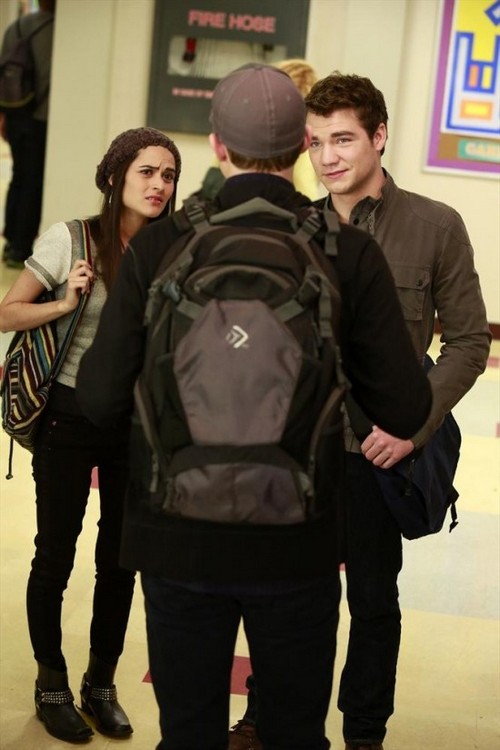 SWITCHED AT BIRTH returns to ABC Family tonight with a brand new episode called “Love Among the Ruins.” On tonight’s episode, Melody wants to put an end to Emmett getting bullied by Matthew. Meanwhile, Bay feels torn between her feelings for Emmett and Tank; and Daphne is determined to hunt down the individual who vandalized Regina’s studio.

On the last episode Bay set out to find out the real story behind Emmett’s girlfriend. Daphne questioned her ability to volunteer at the clinic when she ran into someone from her past. Feeling guilty about her actions, Regina took a chance at work. Meanwhile, Kathryn was shocked to discover that her book had been leaked ahead of publication. Bay had reservations about Emmett’s new girlfriend. Did you watch the last episode? If you missed it we have a full and detailed recap, right here for you.

On tonight’s episode Bay faces the consequences of her unplanned romantic encounter with Emmett. Will she break up with Tank; will Bay and Emmett start a new life together? Meanwhile, Daphne sets out to find the person who vandalized her mom’s design studio. And Matthew continues to bully Emmett.

Tune in to ABC Family at 8PM EST to watch “Love Among the Ruins.” We’ll also be recapping it all live for you right here. In the meantime head to our comments section and tell us your thoughts on season two so far and enjoy a sneak peek of tonight’s episode below.

The morning after is a cruel awakening for Bay and Emmett. She hates herself for cheating on her boyfriend. Although she’s not sure about her feelings for Tank, that doesn’t mean she wants to ride off in the sunset with Emmett. Even if that was what he was wishing for before.

As for Emmett, he’s been covering up his beat-down. He was too embarrassed to admit to what happened to him and was willing to overlook what his former friend did just so he could forget about it. But Matthew didn’t want to accept the olive branch and let bygones be bygones. He was still angry about Emmett allegedly betraying him when our favorite ginger ratted him out to the school officials who was behind the recent vandalism.

Though now when we look back on it violence and manipulation does seems to always have been a part of Matthew’s nature. He beat up Emmett and instead of leaving it at that, he’s posting the texts messages Emmett sent to him during his catfishing days. So he’s not letting up and Emmett doesn’t feel like he has Bay to turn to.

She found out from Tank that he quit his fraternity. And because of this none of the other brothers can talk to him for up to a year. He lost both his housing and a lot of his friends in order to please Bay. After hearing what he did for her, she didn’t have it in her to break up with him or to tell him the truth.

And the only one that knows about all of this is Daphne. She had to help Bay get the morning-after pill when her “sister” realized she didn’t use anything with Emmett last night.

However, Daphne and Bay had to put aside guys and focus on their mother. Regina was threatened and Daphne naturally wants to fix everything to make it better. She learned through one of her old contacts in the neighborhood that this guy called Nacho ordered the brick hit and so she and Bay went to pay him a visit. They wanted to convince him to leave Regina alone.

They buttered him and his brother up to get them to drop their guards, then they asked for Regina to be taken off their hit list. The guys didn’t like it, but there was a small chance that they could have listen. Daphne told them Regina was no longer working on the project and so they might have dropped it there.

Yet the girls didn’t know what the adults were up to during their visit. While they were telling everyone Regina was out the rest of the parents, once they were apprised of the situation, convinced Regina to fight for her job. Wes was also getting threatened over the gentrification project and he wanted to walk away. So it was Regina’s return into the fold that rejuvenated this very hot button issue. The project is going through because of her and a lot of people are bound to be angry.

And we all know where that anger will be pointed at!

Daphne was upset to hear her mother was back on the project and seeing as she had run out of options protecting her — she finally sought out help. Daphne went to Angelo. She asked two things from him. She wanted him to learn sign language and she asked him to move in. Having him at the house will make her feel safer. And having him learn her language will make following conversation with him and his accent that much easier.

Emmett didn’t have his two best friends to lean on with Matthew being on his back, so he looked to his mom for help. She offered to be there with him when he reported the cyber bullying. And though he wasn’t pleased to find himself a snitch, he was going to go through with it again. That is until Matthew showed him a photo.

Emmett sent a photo of himself to Matthew back when the jerk was pretending to be his online girlfriend. So when Emmett clammed up in front of the principle and his mother, Melanie lost it. She cornered Matthew at school and got tough with him. Something she shouldn’t have done while being a school official or on school grounds.

Melanie was suspended and Emmett was feeling guilty when Bay called him. She hasn’t broken up with Tank, but she is planning to. Bay wants to be with Emmett. Despite two years of them being apart, they work as a couple.

So that should be a happy ending to Bay/Emmett saga. But John was innocently typing something into the computer when Google offered him a suggestion based off of the last place he looked. Up popped where someone could find the morning after pill nearby!