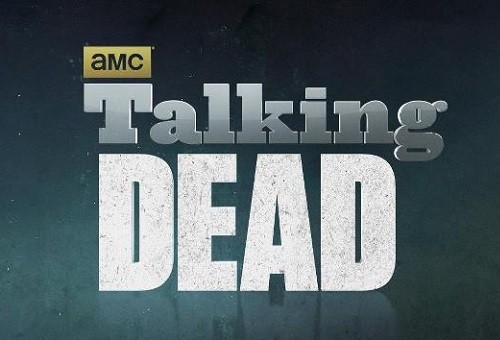 Talking Dead airs tonight, at 10 PM ET on AMC after The Walking Dead. While you wait for the recap, Celeb Dirty Laundry offers a live recap of tonight’s The WalkingDead Season 5 Episode 6 “Consumed” right here!

Chris introduces his guests CM Punk, Tyler James Williams and Yvette Nicole Brown. Chris asks Tyler how its been to be on the show, Tyler says he was such a big fan and finally decided he’d like to give it a try. Chris asks what happened to Noah being in the hospital, Tyler says he was manipulated to beleive everything was hell outside and that’s why he was horrible with Daryl and Carol because he didn’t know if he could trust anyone. CM Punk says hated Noah, mainly because he can’t trust new characters at all. Yvette likes Noah in the beginning yet wasn’t a fan of him this episode, but thought it was great if he was following them long; Tyler says it wasn’t for that long. Chris shows the audience Yvette’s long list of notes on the show, she is a huge fan. Tyler mentions that he feels Noah over did it after escaping the hospital, it hasn’t been going to plan.

Chris aks what it was their reaction when Noah mugged Daryl and Carol successfully, CM Punk says he knew something was going to go wrong when Carol pushed the gun through first.Yvette says that the fire was really nice, with over 10 different scenes with fire; it was interesting how Carol set the fires in the flash backs but in the present Daryl set on the fire. Chris asks Tyler why Daryl has the book, Tyler says that he is very curious to see all the things he’s been picking up in his bag since season 1. Chris asks CM Punk if Carol was truly aiming for Noah’s legs, Punk says he doesn’t think so at all; he believes she was totally going to shoot him. Tyler mentions that she was going to drop him as wel. Chris says he feels it’s more humane to kill him and not wound him to suffer and die anyways.

Chris asks if people are sad Daryl and Carol didn’t hook up, CM Punk says it’s ridiculous because it’s the zombie apocalypse and they have such a chemistry together. Chris asks if Yvette likes Noah and Beth, she believes they both have went through the same trauma and now they could develop a little something. Chris asks Tyler and he says if you plan an escape with someone then you’re pretty close. Chris asks why Carol was reluctant to share her memories of the shelter, CM Punk says they have started over in this world so worrying about the past may not be something so relevant anymore. Chris asks Tyler what he thinks for Carol to give Noah another shot, Tyler believes it’s because he was just a kid stuck under a bookcase and that any mother wouldn’t leave a kid like that.

A fan from the audience comes up and asks Tyler how it was shooting the scene under the bookshelf, Tyler says they actually laid it on him and he was hyperventilating from it; he almost blacked out with how fast he tried to get up after having it on him. Chris gives a body in bed sheets to the fan hoping he can burn it for him later. Chris asks CM Punk how he felt when Carol got hit by the car, Punk says that it was amazing how she got hit by the only car moving in the whole city.

Chris asks if it is scarier to get bitten by a zombie or fall off a bridge in a van, CM Punk says he’d take the van without a doubt. Chris asks what NOah is thinking with Daryl in the truck at the end; Tyler says that he’s thinking “What am I doing?” He robbed him and was almost left for dead, but he knows he has to go back and save Beth. A fan calls in and asks what Carol meant about how she can’t see people anymore, Yvette couldn’t figure it out but feels like she is ready to step out of this world. All the fans in the audience are getting messenger bags.

We see a clip for next week of the Walking Dead, Beth starts yelling at Dawn talking about letting Carol die; Beth turns around and talks back at them but Dawn lets Carol surely die now because of how Beth talked to her.