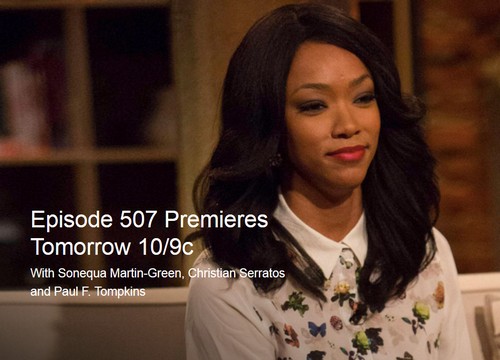 Tonight on AMC Talking Dead returns with an all new Sunday November 23, season 5 episode 7 and we have our weekly recap below for you. On tonight’s episode, the “Crossed” episode is discussed with guest stars Sonequa Martin-Green, Christian Serratos and Paul F. Tompkins.

Tonight on Talking Dead as per the AMC synopsis, joining host Chris Hardwick  Sonequa Martin-Green who is best known for playing Sasha on The Walking Dead, Christian Serratos who plays Rosita on The Walking Dead and is known on the show for her devotion to Abraham and provocative dress style and Paul F. Tompkins who is best known for his stand up comedy, but has also been in hit movies like There Will Be Blood, Tangled, Anchorman, and Tenacious D in The Pick of Destiny.

Talking Dead airs tonight, at 10 PM ET on AMC after The Walking Dead. While you wait for the recap, Celeb Dirty Laundry offers a live recap of tonight’s The Walking Dead Season 5 Episode 7 “Crossed” right here!

Chris introduces his guests tonight Paul Tompkins, Christian Serratos and Sonequa Martin-Green. Chris tells Sonequa she looks amazing and she says she is excited for the holidays and is 8 months pregnant right now, Chris says he’ll deliver the baby on his birthday and have it named after him. Sonequa says she is amazed with how much she’s been able to do being pregnant right now, he asks about how a baby in the apocalypse seems like a liability. Sonequa says she’s happy they aren’t in one right now, she’s excited for her child.

Chris asks about Sasha transforming on the show, Sonequa mentions how Bob saved her from the exclusion though he was just taken away from her. Chris asks about how Sasha was not happy about not finishing off Bob, Paul says it’s person you love so you’d want it to be you and no one else. Chris asks Christian about Rosita about her survival skills, Christian says she probably took what she learnt from other groups and has adapt to learning what she needs to live. Christian said she loved getting to catch fish, Chris asks Paul if he is ready for the apocalypse; he says he’s not ready at all.

Chris asks Sonequa about the whole cop named Bob moment, she says that Sasha felt like she needed to help this man that share the name of her lover; she wanted to go ahead and help him out. Though it didn’t really turn out good, Chris just felt it the whole time that this new Bob would surely screw things over. Soneque says he seemed very trustworthy to everyone, though he could have done much worse; Christian says that Rosita wouldn’t have trust him at all. Paul says he’ll never trust anyone ever again on the season, they always get back stabbed. Chris asks if Sasha will trust anyone at all now, Sonequa says her trust is dead. Chris says it feels like Rosita has really gotten under Abraham’s skin more than he realized; Christian says it’s very much so like that.

Chris summons an a fan from the audience, Rene asks Christian what he perfect apocalypse outfit; she would like to have Rosita’s outfit honestly because it’s very mobile. Chris asks Paul if it’s good to tell the group Eugene crashed the bus, he thinks it’s not smart and that the later secret was a bigger deal. Sonequa talks about how Sasha is very present minded right now, she doesn’t want to think of the future.

Chris asks if a hostage swap between the group is smart, Paul says that he would love to always be able to take the high road by doing a hostage exchange, though is a big fan of the guns blazing plan. Sonequa says that Sasha is all game for that plan, she is done trusting people. A caller Vicky asks Sonequa, if she would trust anyone at the hospital; Sonequa says there is no one there she would be trusting. Paul says Dawn is so complex, she makes no sense and is very confused by her choices.

Chris asks Sonequa what it was like to see the melted walkers on the road, she says it was so disgusting in person; when she was walking through it she had no idea some of them were real so it surprised her. Paul says he really liked how Daryl smashed the guy in the head with a head. Chris asks about relationships in the apocalypse, Christian says that it’s more of a escape to the world your in.

The sneak peak of the next episode shows Gabriel going over to a place and finding a backpack with a book inside of it, he starts going through it and then notices a leg sitting on a grill. Gabriel takes the whole thing and throws it away.