Tina Fey and Amy Poehler Bully Taylor Swift at Golden Globes: Are They Going To A Special Place In Hell? 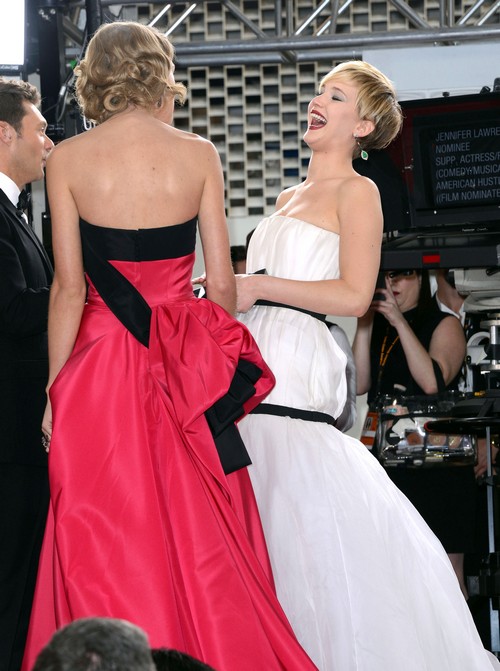 All of Hollywood’s A-List flocked to Beverly Hills Sunday, January 12, 2014 for the 71st Annual Golden Globe awards to witness the elite of American television and film being honored for their respective remarkable achievements. Of course, they also got to witness Taylor Swift facing “trouble, trouble” being mocked by funny Saturday Night Live BFF duo Tina Fey and Amy Poehler, for the second year in a row.

To understand the present, sometimes it is necessary to look at the past and this is one of those instances. During the 70th Golden Globes last year in 2013, Fey took a swing at Swift’s very public dating life by admonishing the starlet to “stay away from Michael J. Fox’s son”, Poehler then told Swift to “go for it” where Fey responded Swifty needed some “me time” in a very public diss. Swift who was present (at both awards shows) was interviewed by Vanity Fair and when asked about the public diss, stated:

“You know, Katie Couric is one of my favorite people, because she said to me she had heard a quote that she loved, that said, ‘There’s a special place in hell for women who don’t help other women.'”

Upon Poehler winning her first golden globe, Fey showed love for her bestie by saying “congratulations… there is a special place in hell for you.” This prompted Poehler to fall out in stitches with laughter. It was almost like an inside joke but one that everyone knew about. An inside joke that probably made Swift want to run, and swiftly get away from her seat to hide in the bathroom with embarrassment. This comical display at Taylor’s expense begs the questions, did Fey and Poeler go too far or is all fair in love and war in Hollywood?

It is easy to get upset with Fey and Poehler, and say shame on them for teasing a poor young girl about the love life she chooses to live in the spotlight. As Swift’s comment last year was ostensibly meant to convey that women should support other women and not tear each other down, this is a notion that most will find easy to agree with. However Fey and Poehler were not ‘not supporting’ Taylor but simply making well deserved light fun of her well-known proclivity for lots of public drama in her love life, and her use of that drama to further her music career. Taylor peevish attempt to portray the hosts’ humor as some sort of anti-feminist action was disingenuous and illogical.

For starters, it is not like Taylor Swift was singled out. The duo make sharp jokes in general and this year made funny jibes towards other A-listers, like welcoming Leonardo DiCaprio to the stage like a “supermodel’s vagina.” They are also both affiliated with a show known for its satiric comedy poking fun at the lives of celebrities and current world events. I mean why would anyone expect them to not implement that style during their hosting gig? Having said that, there was even more behind this perceived diss Sunday night.

Poehler was interviewed after the 2013 Golden Globes by The Hollywood Reporter about the original Taylor Swift diss and her comments about the “special place in Hell” waiting for her, Poehler stated:

“Aw, I feel bad if she was upset. I am a feminist and she is a young and talented girl. That being said, I do agree I am going to hell. But for other reasons. Mostly boring tax stuff. “

So maybe Tina Fey’s comment Sunday night, although reminiscent of the 2013 straight up diss to Taylor Swift, was really poking fun at her BFF’s own words; that she agrees she is going to Hell. The irony of the situation is that Poehler actually has a YouTube channel dedicated to empowering young girls. Word on the curb is Taylor is not too happy about what went down Sunday night, and that she flipped out after the show. The dirt in this story definitely needs to be washed out. Who is the dirty one in this load of celebrity laundry? Are the mean girls Fey and Poehler, wrong for picking on America’s red sweet heart, or is Swift wrong for seeing red and banishing the funny duo to Hell?