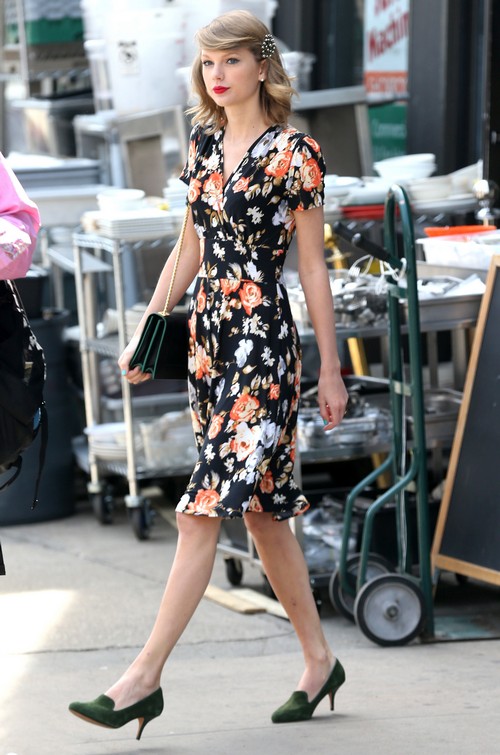 Christina Aguilera and Taylor Swift feuding? Sure, why not – after all, isn’t Taylor feuding with pretty much everyone in Hollywood right now, including her former BFF Selena Gomez?

According to new reports, Christina’s issues with Taylor are mainly centered on her clothing. Apparently, Christina hates Taylor’s sense of fashion, and has ‘instructed’ her team to dress her in outfits that in no way resemble anything that Taylor’s worn recently.

Yeah, I’m a little confused as well. Why does Christina feel such vitriol towards Taylor, exactly? They’re not really in the same demographic, nor they do they really aim their music at the same audience. They’ve never publicly fought or been in a media-induced ‘feud’, so what’s with the fashion hate?

Radar Online’s ‘source’ explains, “Christina loves getting attention for looking trashy and not put together and uses Taylor as a kind of ‘anti-inspiration’ for her fashion, makeup and hair now. She can’t stand Taylor’s preppy prissy ‘caged bird in a tower’ thing — and has used her as a guide on what NOT to wear for over 18 months.”

Damn, that’s harsh. If anything, fashion is one of the few things that Taylor consistently gets high marks on from the public. Christina, on the other hand, usually does look pretty trashy, and not in a good way. So is she bitter that Taylor’s managed to get a better fashion rep than her? Again, I’m not really sure why she’s concentrating on Taylor’s fashion in particular, especially when there are other singers who have better taste in clothes, are more ‘prissy’, and get noticed more for it.

There’s also some ridiculous addition to the reports about how Christina is jealous that she’s pregnant, and that Taylor is ‘flaunting’ herself. If you ask me, this feud came out of nowhere and there’s absolutely nothing to support this story – no rumors, no past feuds, no reasons for this drama to exist. Obviously, someone’s just trying to stir up some gossip between Christina and Taylor, but don’t they both have enough going on at the moment? We resort to make believe?