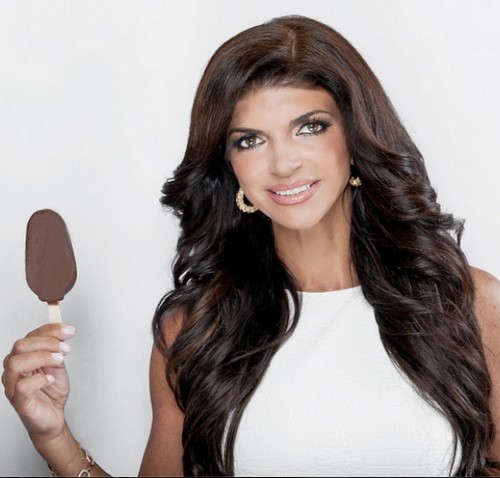 Pregnant Teresa Giudice and Juicy Joe Giudice are both fired from Real Housewives of New Jersey and days away from being sentenced to prison [or in Teresa’s case, house arrest], but that’s not going to stop them from partying. No, siree, they’ve still got a few days of freedom left, and they’re taking full advantage of that. According to Radar Online, Teresa and Joe have decided to throw a ‘Stay Strong’ party at Pure Lounge in New Jersey. Even though they’re both getting sentenced for their fraud case on Thursday, sources told Radar that they looked like they didn’t ‘seem to have any care in the world‘. They ate cake, they danced, they drank, and they spent time with friends and family. In other words, they don’t seem to realize that their lives are about to come to an abrupt half in just a few days, or maybe they just don’t care.

I mean, any innocent bystander watching this display would wonder if Teresa Giudice and Joe Giudice even felt a lick of remorse or guilt over their crimes. They should be having an ‘I’m sorry I stole millions’ party, not ‘Hey look, we’re going to jail soon, let’s celebrate!’ party. But knowing what we do about Teresa and Joe, I guess this isn’t much of a surprise. These two haven’t shown an ounce of regret over their actions, despite the fact that they committed fraud and stole millions right under everyone’s noses. The only reason they’re even upset is that they got caught, but sooner rather than later, their decisions will catch up to them.

Actually, if we’re being completely accurate, it’s already caught up with them. Teresa Giudice’s been fired from The Real Housewives of New Jersey, and not only that, but she’s broke, possibly pregnant, and rumored to be getting divorced from Joe Giudice. Any one of those things would suck on a regular day, but all three? No wonder she’s having a party now if that’s what awaits her in a few days. She doesn’t have a job to look forward to, her income stream is steadily depleting, she’s about to lose her husband [if not to divorce, then to jail], and she could possibly be raising a child by herself under house arrest come this same time next year. It sucks to be Teresa Giudice, doesn’t it?