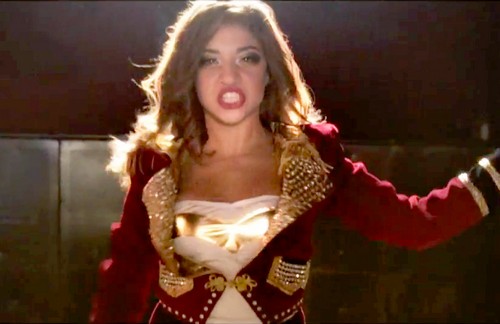 Bankrupt felon Teresa Giudice spent $10,000 on a risque video featuring 13-year-old Gia Giudice and her girl group 3KT covering ‘Circus’ by Britney Spears. Teresa Giudice and Juicy Joe Giudice should be spending quality time with their young, impressionable children, especially knowing they will both be away for extended lengths of time as they each have a prison term ahead of them. But, as we know, Teresa and Joe almost never do the right thing.

In a disgusting attempt to stay relevant and secure a continuous money flow, The Real Housewives of New Jersey stars Teresa and Joe have allowed their 13-year-old daughter Gia Giudice to dress in very risque revealing outfits, dance and wriggle around in sexy moves a la Britney Spears, and wear make-up and pose seductively for the camera as part of her routine with band 3KT. Gia, only 13-years-old, has released an extremely ‘mature’ video with her new girl group band covering Britney Spears’ Circus. A source revealed to them that ‘bankrupt’ fraudster Teresa actually paid $10,000 for just part of the production, with the parents of the other girls funding the rest.

The band consists of Gia Giudice, 13, Alexa Maetta, 16, and Cristianna Cardinale, 14. Yes, all underage girls, dancing around like strippers, fueling YouTube users to slam the girls for the seriously risqué performance. How Joe Giudice and Teresa Giudice can stand by and allow their daughter to do this is nothing short of disgusting. Clearly they’ve takenn a page out of Kris Kenner’s book. 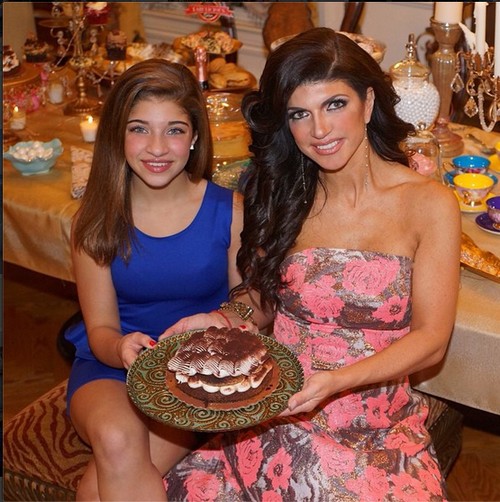 The Giudices should be working towards redemption, not another paycheck obtained by being sleazy again. One user wrote after seeing the video, “Little girls like her should not be dressed like their grown women. I don’t respect the fact that their parents allowed them to dress this way. She might be a really sweet girl but all this does is allows men look at them and disrespect them.”

It is heartbreaking to see that the Giudices would allow this and that they have no problem seeing their little girl dressed as a grown-up tramp in order to keep the money train coming and extend their last minutes of fame. This is such a critical age, the early teens, and with Teresa going away to prison for 15 months, she better expect that when she returns Gia will already be uncontrollable.

It is scary to think that Joe will be in charge of Gia as he is never around, always drinking, and does not have a close relationship with his daughters. While Teresa is away, Joe plans to play—and that will leave the perfect opportunity for Gia to run wild. With her new band and newfound fame, she is loving the fact that she is in the spotlight now and wants to be able to make a career in the music industry. Gia will have to take on the motherly role while Teresa is gone, which will only make matters worse as she already feels like she is “all grown up.” The excitement of the attention and fame will continue to suck Gia into the world of entertainment, but with no responsible adult to oversee and guide her, this is a recipe for disaster. What a perfect song for her band to cover considering her family life….’Circus,’ indeed.

An appropriate song for Teresa Giudice below – perhaps she should listen to it and get the message.