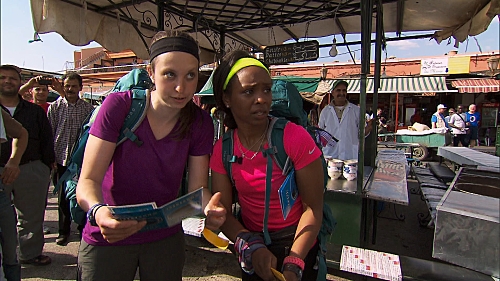 Tonight on CBS the Emmy award winning show The Amazing Race returns for yet another exciting installment in an all new Friday October 24, season 25 episode 5 called, “Morocc’ and Roll.”  On tonight’s episode, the racers visit Morocco.

On the last episode, when tasked with a painstaking Detour, the Dentists faced the realization that they may needed to use “The Save.” Meanwhile, one team’s lack of communication lead to a massive meltdown on the mat. Did you watch the last episode? If you missed it, we have a full and detailed recap right here for you.

On Tonight’s episode with a double U-turn looming, emotions run high when two teams accuse each other of playing dirty.

It’s time for #AmazingRace. Eight teams remain and we are currently in Copenhagen with them at the VM Houses. It’s time for the next leg. Kym and Alli leave first for Morocco where they have to find a stand in a market. #TheCyclists are off! #TheWrestlers are right behind. Next is #TeamNashville. #SweetScientists are in fourth. Kym and Alli find out they can gt in at around 3 pm. They’re upset that their lead will be lost.

#CollegeSweethearts are next and #MomDaughter have made up overnight and are ready to act more like a team. #SoulSurfers are the seventh and #TheDentists are in last place and are glad they didn’t have to give up their save. They are determined to do better on third leg. They all sit around the airport and the other teams aren’t happy that they didn’t have to use their save. Jim says they are all glaring at them.

Marrakech, Morocco is the site of today’s leg. They are all there and in taxis headed to the airport. Nici knows Spanish which is spoken there and negotiated with the driver to stay with them all day and hold on to their bags. This could be really good or really bad for them. At the market, the teams are looking for a brown door. It’s a huge place and they’re distracted by all the cool stuff. Teams have to help food vendors set up their carts.

Team Nashville is there first and The Dentists face a #speedbump for losing the last round. They have to pull out rugs and stack them up for a vendor. The other teams are all at the food cart challenge. The cart are heavy and the teams are running into each other. They have to find their assigned locations and are traffic jamming. This is a particular challenge for Bethany without two hands to work.

Jim and Misti are hanging the rugs up but it’s very hard. This is going to be hard for them and will leave them much further behind. Also, there is a u-turn lurking and they may get slapped with that as well. The teams struggle to set up their food carts. There is also a significant language barrier they’re all dealing with. Jim is doing okay at their challenge, but Misti is struggling because it’s up over her head and the rugs are very heavy.

Team Nashville finishes up first and get directions to go to a tannery to get the next clue. Misti and Jim are still sweating it out as a hook falls of a rug and Jim is getting frustrated with his wife. They are finally on their last rug and realize they are in big trouble. They run back to the rug dealer’s shop then haul out their cart. Jim is frustrated again because Misti isn’t pushing and he’s carrying the heavy cart all on his own. They get started.

Keith and Whitney are looking for the tannery. The other teams are also wrapping up the food cart challenge. The teams are all struggling to find the tannery and wander through the marketplace. The Dentists are done but are about 12 minutes behind the others. TeamNashville are the first to find the shop. The #roadblock requires them to scrape and pull the hair off three animal hides then deliver three hides to a local cobbler.

Keith says he’ll do it. The other teams start to stream in behind them. The chemicals smell bad and one racer is actively gagging over the stench. Bethany is trying this one which may be a huge challenge for her. Bethany’s hubby tells her it’s just like shaving his back and she laughs. Misti decides to do it to try and make up for her sandwich shop fail.

TheCyclists are done first. Maya says it smells like the goat pen at the zoo. Kym is on the bike riding and weaving through the city. Bethany struggles to get the hides onto the bike and someone comes over to help her. Misti is catching up to Nici and Jim encourages her to hurry. The ones done and on the bikes ramble around lost and are almost knocked off their bikes. Misti finishes up and Shelley is all over her. She tells her mom to shut up.

The others are all amazed that Bethany is neck and neck with them. They call her a beast. Misti accidentally knocks Nici’s bike over but apologizes. She then runs into a cyclist. All the teams are stuck on one corner and no one has a clue. They all show up to the cobbler at once and are piling on top of each other to try and get their clues. Now they have to bike back to the tannery.

Nici is first back and Misti is also in the first group. Keith and Shelley get in an argument over who gets the first clue. Keith threatens Shelley if she pushes him again and she says “or what.” Boy she is a piece of work.

They all run off and Shelley rants about Keith because she says he was there but his partner wasn’t by him. Whitney isn’t happy either. Amy and Maya are next to last and Tim and Te-Jay are last. The Soul Surfers and Cyclists are there first. Twirl Time has you play an instrument and swirl a tasseled hat while the other plays a drum. Or Tea Time lets you carry a tea set to a restaurant and balance a tray of glasses while the other pours tea.

The other teams show up and make their choices for their #Detour. Bethany and Adam choose tea service. Keith and Whitney are doing music. Misti and Jim are also doing tea service. Maya and Amy chose music. Shelley and Nici also chose music. This one is hard because you have to twirl a braid on a hat that’s like a fez for a minute straight.

At the tea shop, the teams get a demonstration and then try it. Misti uses two hands but doesn’t realize what the problem is. Adam and Bethany decide to practice first before testing. Kym and Alli are doing the music but Kym is getting dizzy. Whitney is worried she can’t twirl right and keeps messing up. Maya’s hat keeps coming off and says it’s not working with her hair. Shelley also is struggling and the tassel is hitting her in the face.

Tim and Te-Jay get to the tea shop. Misti is still using two hands and fails again. They won’t tell them what they’re doing wrong just that they missed. Adam and Bethany take their turn and get it right on the first time. This puts them in first and they are told to head to a cafe where the u-turn is located. The music challenge is proving to be a huge challenge. Kym and Alli finally complete it. Whitney and Keith switch because she can’t get it. But he’s struggling too.

The people in the marketplace are actively laughing at the stupid Americans trying to play the local music. Misti still has two hands on the try and they are clueless and fail for a sixth time. Adam and Bethany get directions from some locals but the Cyclists already beat them there. They chose to not u-turn anyone. The check in is at a bazaar in a rug shop. Adam and Bethany are there and also don’t u-turn anyone.

TheCyclists are there and the SoulSurfers are seconds behind them. Kym and Alli are thrilled they won first place again. Phil tells Kym and Alli they won $5,000 each. They are so excited but worry they have a huge target on their backs now. Nici coaches her mom and how to twirl her hat and she finally gets it. They head off. They show up to the u-turn and debate who to u-turn. They are annoyed with both Keith and Whitney and Misti and Jim. Hmmm…

They still have their instruments on them – didn’t they have to return them? They decide to #uTurn Keith and Whitney. Nici and Shelley run back to the taxi to pay their driver and then to go to the pit stop but are still in the music stuff. Tim and Te-Jay complete the tea challenge and Misti finally realizes she was holding the tray two handed. Tim and Te-Jay get to the site and grab their final clue for this leg. Jim and Misti finally get permission to go and head off to the cafe. Brooke and Robbie are close behind.

Tim and Te-Jay score third and then Shelley and Nici show up for fourth – I can’t believe Phil didn’t send them back to return the giant drum and outfits they essentially stole. No one else uTurns anyone. Whitney tells Keith they need to give up and try the tea challenge instead. Brooke and Robbie take fifth, Misti and Jim are sixth and Amy and Maya are in seventh. Not looking good for Team Nashville at this point.

They show up to the tea shop and get their clue and head off to the cafe where they see they were u-turned. He says he shouldn’t have gotten in a fight with them. They have to go back and do the music challenge and do. Phil tells them at the check-in they are the last team and have been eliminated. They are naturally upset and lament the choice of not choosing the right challenge. That’s it for Amazing Race from Morocco! Team Nashville, Keith and Whitney are eliminated.