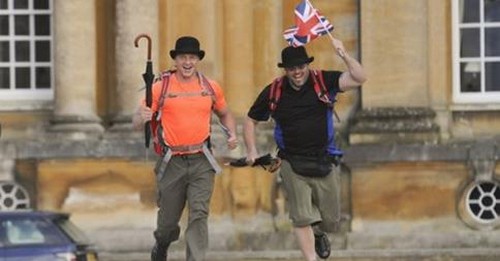 Tonight on CBS the Emmy award winning show The Amazing Race returns for yet another exciting installment in an all new Friday October 3, Season 25 episode 2. On “When You Gotta Go, You Gotta Go” the race continues in Oxford, London.

On the last episode, season 25 began with 11 teams in New York City’s Times Square, where they learned that the duo who won the first leg of the race would receive “The Save,” a game-changing element that allowed them to rescue themselves if they finish last on a future leg and face elimination. Next, the teams flied to the U.S. Virgin Islands and participated in their first challenge. Did you watch the last episode? If you missed it, we have a full and detailed recap right here for you.

On Tonight’s episode the race continues in London where teams try to win an Express Pass, but some pairs chances are capsized while boating in a punt in Oxford, England.

RECAP: The teams all fly to London. The first detour involves choosing between a pancake race where they must race running while flipping a pancake continuously without letting it hit the ground (called “Pancake Race”) and a challenge where they must dress up and undergo a drill as members of the guard, memorizing the steps and performing them with precision (called “About Face”).

Misti and Jim complete their challenge and end up in the lead at Paddington Station. The cyclists arrive second.

The next challenge is a punting challenge. The teams struggle to get their boat through the water, with several people falling right out of their boats.

The pit stop is Bleinheim Palace, Winston Churchill’s birthplace. The last team to arrive there may be eliminated.

Adam and Bethany are the first to arrive. As the winners of the leg of this race, they have won a trip for two to Sweden. They also have the express pass, leaving them with a good safety net for continuing on.

Shelley and Nici are extremely stressed out and worried that after all of their following of the show and hard work, they are competing to beat someone to stay on the show, but they manage to complete the punting challenge and stay in ninth place. They make it to the palace relieved. Dennis and Isabelle are the last team to arrive, and Isabelle breaks out in tears. “To be eliminated after being so careful and prepared, it doesn’t feel real,” Isabelle says. Final result: Dennis and Isabelle eliminated!