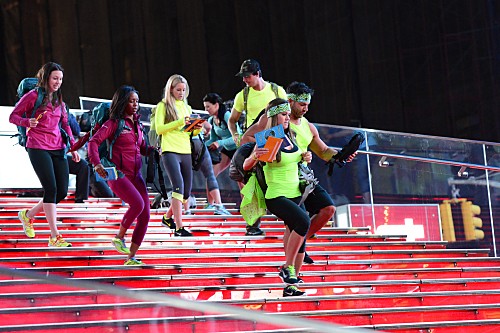 Tonight on CBS the Emmy award winning show The Amazing Race returns for yet another exciting installment in an all new Friday September 26, Season 25 premiere episode. On “Go Big or Go Home” season 25 begins with 11 teams in New York City’s Times Square, where they learn that the duo who win the first leg of the race will receive “The Save,”

For those of you who are new to the show, this season of THE AMAZING RACE, which marks the 25th edition of the 10 time Emmy Award-winning series, will feature 11 new teams, including professional surfer Bethany Hamilton and her husband Adam Dirks, Boston firefighters Michael Ward and Scott Strazzullo and professional wrestlers Robbie E. Strauss and Brooke Adams. The Race kicked off in May with the first-ever public start from Times Square in New York City where Phil Keoghan introduced a new game-changing element, “The Save.” The team that finishes first in the premiere episode will be awarded “The Save,” which they can use to rescue themselves if they come in last on a leg and face elimination. Teams this season will be put to the test as they travel through eight countries and 20 cities, spanning more than 26,000 miles. For the first time in the show’s history, the Race will visit St. Thomas, Virgin Islands, where teams will fly high in the sky; Valletta, Malta, where they’ll rappel 200 feet into a breathtaking Blue Grotto sea cave; and the Shetland Islands, Scotland, to test their sheep-herding skills.

On Tonight’s episode season 25 begins with 11 teams in New York City’s Times Square, where they learn that the duo who win the first leg of the race will receive “The Save,” a game-changing element that allows them to rescue themselves if they finish last on a future leg and face elimination. Next, the teams fly to the U.S. Virgin Islands and participate in their first challenge.

Amazing Race season 25 starts with 11 new teams. Adam and Bethany are newlywed surfers. Bethany is the famed surver that lost her arm to a tiger shark. Next is Amy and Mia, food scientists from Wisconsin that study candy and ice cream. Yum! They want to show the world how cool scientists are. Dennis and Isabelle are an accountant and model that are dating. They are both Asian, Cambodian and Vietnamese whose parents aren’t happy. Brooke and Robby are pro wrestlers that are dating.

Keith and Whitney are engaged and from Nashville. They met on Survivor. Kim and Allie are NYC competitive street cyclists that call themselves adrenaline junkies. Lisa and Michelle are sister realtors from Miami. They are looking to rely on their looks. Michael and Scott are Massachusetts fire fighters who helped out after the Boston attack. Tim and Te Jay are a pair of college sweetheart dudes. One’s mom is in denial about him being gay.

Shelley and Nici are mother-daughter flight attendants. They say they are often mistaken for sisters. Misti and Jim are married dentists from South Carolina. They look like a golden couple but he’s kind of scary looking. They are at the crossroads of the world – Times Square – in New York City. There are past Amazing Race competitors there along with a ton of fans. Phil says it’s the 25th anniversary (technically not true – anniversary means year – it’s the 25th season, but not year).

He tells them that for the first leg, if you come in first place, you get a save that can bail you out of a later loss. Phil sends them off and they go running. They rush up the stairs and grab their first clue. It says to start where the last race ended. It’s the Globe at Flushing Meadow Park. They scramble for taxis. Dennis and Isabelle are in first place. The race is on. Adam and Bethany #SoulSurfers are in first and get the clue that sends them to St Thomas and tells them there are only room for five teams on the first flight.

They get to JFK and try to figure out where to check in. Tim and Te Jay #CollegeSweethearts beat them to the counter and move to first place. Dennis and Isabelle #TheDatingCouple also dash in and get the next spot on the flight. Bethany and her sweetie finally get a clue and land the third spot. #TheDentists get the fourth slot and #TheCyclists land the fifth spot.

#SweetScientists #MomDaughter #MiamiRealtors #TheWrestlers #TheFirefighters and #TeamNashville are on the second flight. They are all en route to the Virgin Islands where they have to catch a sea plane flight. The first flight lands and they scramble. The cab driver is excited to get them there first. They head to Vendor’s Plaza. The surfers and the dentists are on the first flight. The first five  teams all make it there and get signed up on the list.

The first sea plane lifts off then the second. Everyone is gunning for the win to get the save. At the airport, the second flight lands and they all scramble for cabs. Two teams share. Flight three takes off at the sea plane harbor. The firefighters are furious that the pen is yanked out of their hand and their name went lower on the list. The first sea plane is landing. They hop off and race to face the first challenge.

Phil is there and says they have to climb a cliff and then jump two stories down into the ocean to grab a clue from the water. They work up the cliff and Bethany is rocking with just her one arm like a champ. The first team makes their #LeapofFaith – Tim and Te Jay then the surfers also make their jump. They get a clue saying to head to Blackbeard’s Revenge – a pirate ship.

Michael and Scott are waiting on sea plane after sea plane since they were bumped. Tim and Te Jay get a clue from the pirate and are directed to some small rowboats and have to pull themselves along a rope. The surfers are right behind them. They get to the beach and find a #Roadblock. The roadblock forces you to use a liquid compass to navigate and dig up buried treasure. They are struggling to figure out how to use the compasses which don’t work like you think they would. You have to tilt them toward you rather than holding them flat.

The cyclists and dentists get their bottles. That puts them in third and fourth place. The wrestlers, realtors and scientists are on their sea plane. On the beach, the cyclists are clueless and starting from the wrong post. No one can figure out the compass. Jim, the dentist, decides to do it on his own because his wife says he’s super smart. He’s also holding it backwards. Then he uses the compass on his watch and realizes the compass isn’t what they thought. He lets Adam in on this, but probably should have kept it to himself.

The firefighters are finally on the plane and are psyched. They are with the wrestlers and in last place. All the teams on the beach are still struggling. Jim gives Tim and TeJay some help too. But he quickly finds his chest and brings it to the beach. It tells them where to find the first pit stop – Fort Christian where Phil waits for them. The last team will be eliminated. They head off and the others wish them luck. The last two couples haven’t even made it to the pirate ship yet.

The dentists are in their taxi headed to the pit stop. The ones that have been on the beach for a while are panicking when more and more teams show up. The last two teams are almost ready to cliff dive for their clue. The wrestlers grab theirs and are on the way and the firefighters are in last place. At Fort Christian, Misti and Jim come in first and get #TheSave. Phil says it’s the most powerful prize they’ve had.

The rest of the teams are now at the beach but all are floundering because they are clueless about how the liquid compasses work. They are just wandering around, digging and clueless. Once says the sun sets in the East and rises in the West. Tim and Te Jay finally find theirs. That puts them in second place.  The wrestlers find theirs next and are in third. The cyclists turn theirs up then the surfers. The flight attendants are still utterly lost.

Tim and Te Jay make it to the Fort for an official second place. Mom finds hers. The firefighter and realtors are still floundering. Kym and Alli get their official third place and Brooke and Robby the fourth. Adam and Bethany take fifth. The Nashville couple and firefighters are still stuck. Amy and Maya take sixth place. The sun is going down on the beach and they are exhausted. Dennis and Isabelle take seventh and Nici and Shelley are in eight.

The three last teams are now digging around in the dark and are frustrated. We see that all three teams are about a foot away from their treasure chests. Team Nashville takes the four hour penalty and then tries to convince the others to also take the four hour penalty and then race to the end. They all talk and the Miami Realtors are also ready to take the penalty. The Firefighters agree and they all run for it and bribe the cabbies with higher fares to get them there.

It’s a race to Fort Christian. The Firefighers slam the door on the realtors and take a cab since they stole the pen from them. I say good for them – that’s karma they deserved. The cabs pull up at the fort and they go racing. The firefighters and Nashville couple take place nine and ten and the realtors come in last and are eliminated. I, for one, am not sorry to see them go. They told the others the sun set in the East and stole a pen which I think should have got them a time out for theft.