BY Amanda Austin on April 2, 2014 | Comments: one comment
Related : Recap, Television, The Americans 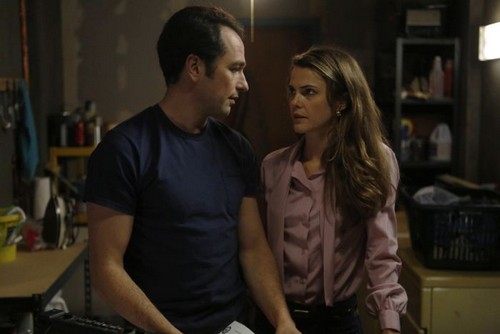 Tonight on FX another new episode of THE AMERICANS is on for you to enjoy. In “Behind the Red Door,”  Elizabeth attempts to access Capitol Hill. Meanwhile, Stan weighs the costs of Nina’s protection.

On last week’s episode Philip and Elizabeth are finally assigned a new handler as Philip worked to clean up the mess of the last operation and Elizabeth, in disguise as Clark’s sister Jennifer, did her best to smooth things over with Martha. As Stan searched for a missing scientist, Oleg and Arkady continued to argue over how best to handle the situation on their side, leaving Nina once again caught between the FBI and KGB. Written by Angelina Burnett; directed by Dan Attias.  Did you watch the last episode? If now then you’re in luck because we have a detailed recap of it for you right here.

On tonight’s episode a dangerous Naval officer becomes the key to Philip and Elizabeth’s mission as well as a potential threat to their family’s safety. Lucia, a Sandinista intelligence officer working with the Jennings, is tasked with getting Elizabeth access to Capitol Hill. Stan struggles with the potential costs of protecting Nina. Written by Melissa James Gibson; directed by Charlotte Sieling.

Tonight’s episode looks like it is going to be a great episode and you won’t want to miss it, so be sure to tune in for our live coverage of FX’s “The Americans” Season 2 episode 6 at 10 PM EST! While you wait for the recap, check out our sneak peek video of tonight’s episode below!

Tonight’s episode of The Americans opens with Phillip and Elizabeth meeting discretely with Claudia, they are feeling her in on the meeting they scheduled with Reston.  Claudia warns them that if he killed Emmitt and Leann he is not like anyone they have ever dealt with before.

Meanwhile Stan is secretly meeting with Oleg.  Oleg has threatened to harm Nina unless Stan hands over all of the FBI files they have on Oleg, from when he was under surveillance.  He tells Stan he has three days to turn them over.

Phillip and Elizabeth go under cover as CIA security and meet with Captain Larig.  They accuse him of working with the KGB for the last four years, and ask him why he betrayed his country and Navy Seals?  They ask the Captain why he killed his handlers, Emmitt and Leann?  Captain says that he didn’t kill them, and “someone got to the bastards before he did.”  Elizabeth and Philip tell Larig to “maintain his relationship” and report back to them.  They leave the meeting and Claudia picks them up in a white van.  They report to Claudia that he didn’t kill Emmitt and Leann, they don’t think.  But, they aren’t going to take him out because he knows something “bigger,” he’s involved in an operation called “Marshall Eagle.”

Stan sits down to have dinner with his wife and son.  His wife wants to know what he think of the paint job on their front door, she painted it “tomato tango.”  His son points out that red means good luck in China.

The next day Phillip meets up with their new handler at a bar.  He fills her in on Andrew Larig, and lets her know that they are looking in on him.  He hands over the file about “Marshall Eagle” and explains that he was involved in the operation in Nicaragua, and it may be a danger to their motherland.

At home Elizabeth is still questioning Phillip about his fake wife Martha.  She thinks it is funny that Martha actually said Phillip is a “wild animal in bed.”  Elizabeth wants to know “what kind of wild animal” he is like.  Elizabeth says she wants to “try it with Clarke.”  They are interrupted by a phone call from Paige’s coach apparently she quit the volleyball team.  Phillip and Elizabeth reprimand her about quitting, but they receive a phone call instructing them they have a meeting so they have to leave.

Phillip and Elizabeth meet with their handler and she tells them what she has learned about “Marshall Eagle.”  It turns out Marshall Eagle is a center on US soil where Nicaraguans are being trained.  They want Elizabeth and Phillip to expose the training centers, the American people have a right to know that they exist inside their country.

Elizabeth meets with a new recruit named Lucia.  Elizabeth needs to get into the Congress Man that Lucia is seducing’s private office.  Lucia says she understands and will helps her.  Later that night Lucia and her boyfriend Carl are getting high in the office.  Lucia leaves the door unlocked and distracts him by having sex with him on the desk.  Elizabeth hides in the shadows and listens to them, waiting for them to leave so that she can finish snooping around.

Once they leave Elizabeth takes photos of files pertaining to the training camps.  She heads home and Phillip develops this pictures to see what information she got.   Larig is part of the training team, but even he won’t be told the location until the day he leaves for camp.

Phillip arrives at home dressed as Clarke, and Elizabeth tries to have sex with him.  She gets upset because Clarke isn’t being rough enough.  So, he tries again and then Elizabeth starts crying.  He runs to the bathroom, feeling guilty that he hurt her and begins ripping his disguise off in the mirror.

Lucia is with Carl, the Congressman’s aid.  Earlier that day Elizabeth told her she had to “tie up loose ends,” because soon they were going to trace her back to the information leak since Elizabeth used her to break into the office.  While Carl isn’t looking, Lucia sprinkles a powder into his heroin before he injects it into his arm.  She slow dances with Carl until he drops dead.  Her “loose end” is officially tied up
Elizabeth arrives home, and Paige rushes downstairs to talk to her.  She explains that she still likes volleyball but she quit the team so she could hang out with the church youth group more.  Paige explains that all they do is talk and have snacks, and invites her Mom to come sometime.  Elizabeth heads to the kitchen where Phillip is washing dishes.  She says Lucia’s job “is done.”

Stan meets with Nina, and fills her in on the Oleg blackmail.  Nina is upset, she says “I knew I would wind up dead.”  Stan asks her that as a bureau policy he needs her to take a polygraph test to prove to his boss that they can trust her and she is worth saving.  Nina begins crying and says that Stan doesn’t trust her and declares she is done with this and him and storms out.

Elizabeth and Claudia wait in the car while Phillip goes after Larig.  He pulls a gun on him and Larig says he “knew the whole time he wasn’t CIA.”

Meanwhile Claudia says she was “wrong about Phillip” and reassures Elizabeth she is lucky to have him.  She tells Elizabeth good-bye, and Elizabeth climbs out of her car.