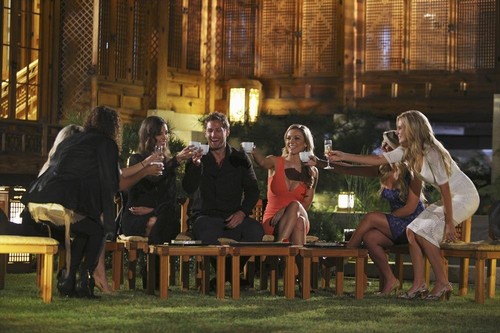 Tonight on ABC Juan Pablo Galavis continues his search for love on THE BACHELOR.  On tonight’s show a spectacular trip to exotic Seoul, South Korea awaits the 13 remaining Bachelorettes.  “K-Pop” Superstars “2NE1” give a never-to-be-forgotten concert.  Did you watch last week’s episode?  We did and we recapped it right here for you.

On last week’s episode Cassandra drew the first one-on-one date after deciding to stay and give love a chance with the dashing Juan Pablo and went on a water adventure she wouldn’t forget.  A group of ten women got to share the Bachelor’s love of soccer, but when they were split into competing teams for his attention on the soccer field, the claws came out. Chelsie, who was afraid of heights, was pushed to the limit on the pivotal adrenaline date when Juan Pablo invited her to take part in a tandem bungee jump in Pasadena. The couple were rewarded with a private concert by country music artist Billy Currington. And Juan Pablo surprised the women in the mansion by cooking them a classic Venezuelan breakfast. The jealousy between the bachelorettes grew as the Bachelor canceled the cocktail party in favor of a pool party, and the rose ceremony proved more challenging.  At the end of the evening, 13 women remained  on the journey to become his soul mate and, hopefully, future wife.

On tonight’s show Juan Pablo starts his international journey to find love with a fascinating trip to Seoul, South Korea. Although he is hesitant to leave his daughter, Camila, behind on this part of the adventure to find his soul mate, he is anticipating exploring the city with 13 amazing women. Six lucky women join Juan Pablo to meet “K-Pop” superstars “2NE1,” the most popular singing group in the country. The mega-stars not only give them personal dance lessons, but a huge surprise. Sharleen shares a perfect date with the Bachelor exploring some traditional Korean foods and locations, until they have a discussion about her becoming a mother. Finally, Juan Pablo escorts six of the ladies on a “Korean Craze,” a whirlwind tour of some of South Korea’s craziest adventures for daring tourists. What happens when Juan Pablo decides not to kiss every woman? The claws come out at the cocktail party and the women clash as they battle for time with the dashing Bachelor in order to build their relationships.    At the end of the night, 11 bachelorettes get to pack their bags for the next stop on the romantic world tour with the dashing Juan Pablo: Vietnam.

Tonight’s episode of The Bachelor takes place in Seoul, South Korea. The episode kicks off with the girls waiting for their next date card. Chelsie, Cassandra, Elise, Danielle, Kat, and Nikki receive a group date invitation, and the card says “pop!” While the girls contemplate what “pop” could mean, Nikki Ferrell contemplates how she is going to cope with “5 annoying girls” on the group date. Some of the bachelorettes’ true colors are beginning to show, and Nikki is not a fan of some of them.

Juan Pablo is excited for his group date. He is taking the six girls to a popular Korean pop music concert, to dance with the band, 2NE1. The girls climb in the van and head off to meet Juan Pablo. He takes them to a dance room at YG Entertainment, to rehearse a dance with the K-Pop group. Kat thinks she is “totally in her element” since she is a professional dancer. 2NE1 gets straight to business and begins teaching the Bachelorettes their back-up dancer routine. They reveal to the girls that they will perform on stage with them tonight in Seoul.

Kat is pumped, she thin she has “this group date in the bag.” Nikki on the other hand is less than thrilled, she is not excited about dancing on stage in front of “screaming Korean teens.” Cassandra, Danielle, Chelsie, and Elise seem to just be going with the flow.

After learning that they will be taking the stage with 2NE1, they head to wardrobe to get their hair and make-up done, and get their wardrobe for the concert.

It’s time for the concert, and 2NE1 take the stage in front of literally five levels of Korean fans. They bring the Bachelor girls up with them, and Kat tries to steal the show, literally. She throws out all of the choreography they practiced, and “did her own thing.” Chelsie thinks Kat should just stay in Korea and work as a back-up dancer, because she obviously takes it very seriously.

After the concert, the girls and Juan Pablo head to “The Furniture Museum” for an exclusive after-party. Kat thinks that she has the group rose in the bag after she busted out her amazing dance moves at the K-Pop concert. She scores some alone time with Juan and decides to reveal to him that her Dad has a serious drinking problem. Meanwhile, Nikki is talking to the rest of the girls and launching an anti-Kat smear campaign. She thinks that Kat is here just for the attention, and that she acts fake whenever the cameras are around.

Cassandra is not impressed with Nikki’s “negativity” and “catty behavior.” Juan Pablo can sense the tension on the group date, and the drama between the bachelorettes. Nikki turns her negativity off when it is her turn to spend some time with Juan Pablo, and charms him by telling him she would “love to meet his daughter Camila,” and brags about her diaper-changing skills. Nikki doesn’t have any children of her own, but she is a pediatric nurse.

Back at the hotel, Sharleen receives an invitation for a 1-on-1 date with Juan Pablo. The girls are intimidated because the invitation says, “Sharleen are you my Seoul-mate?” Clare doesn’t think that Sharleen and Juan Pablo have any chemistry together.

The next day Juan Pablo gets ready for his date with Sharleen, it means a lot to him because right now “Sharleen is his favorite.” He wants this date to be extra special. He heads to the hotel and picks Sharleen up, so they can spend a day together exploring Seoul, South Korea.

Sharleen and Juan Pablo head to a Korean market, and try on some formal Korean outfits and try some authentic Korean food. Afterward they head to Korean tea parlor. Sharleen discusses her music, and what she studied in college. She thinks that Juan Pablo is “more fun than she expected.” After they leave the tea parlor, Juan Pablo pushes Sharleen to sing for him, since she is a professional opera singer. Sharleen caves and sings a few notes for Juan Pablo.

Back at the hotel the other bachelorettes discuss Sharleen and Juan Pablo. Renee thinks that Sharleen doesn’t have any “motherly tendencies.” She can’t picture Sharleen can crawling around on the group with a child and getting thrown up on.

Sharleen confesses to Juan Pablo that she dated a man in the past with a four year old daughter, and she was never able to connect with him because she knew they were never going to have a “first child together.” She is scared that her confession about children will scare off Juan Pablo. Juan Pablo isn’t deterred though, he gives Sharleen a rose at the end of their date.

The next day Juan Pablo takes the remaining girls, Clare, Ali, Lauren, Andi, Kelly, and Renee out to explore Seoul, South Korea for their group date. Juan Pablo surprises them and takes them to a Karaoke House. It proves to be more difficult than they thought since they don’t know the words to any of the songs. Afterwards they head out to explore the city, and ride in paddle-boats and take photos in picture-booths. Then they head to a spa and get fish pedicures.

On the group date it quickly becomes clear that Clare is very territorial of Juan Pablo, and she gets really jealous whenever someone else talks to him or sits by him. She goes out of her way to make sure she gets time with Juan Pablo.

After the group date, the girls each get a little bit of alone time with Juan Pablo. Renee is determined to kiss Juan Pablo, but he has decided he doesn’t want to kiss any more girls on The Bachelor for a while. He has already kissed six girls on the show, and he doesn’t want his daughter to see him kiss 20 different girls on TV. Lauren tries to get Juan Pablo to kiss her during their alone time, and he flat out declines. Her feelings are hurt because she knows he has kissed six other girls in the house. But after he turned down Lauren and made her cry because he didn’t want to kiss her, he decided to kiss Clare.

To top off their South Korea trip, Juan Pablo and the bachelorettes head to a palace for a cocktail party and the Rose Ceremony. Sharleen, Nikki, and Andi already received roses, so they have nothing to worry about. The girls mutually agreed that since Nikki, Sharleen, and Andi already have roses they should hang back and give the other girls some one on one time with Juan Pablo. Nikki thinks that is ridiculous though, and she decides to crash Clare and Juan Pablo’s alone time. Clare is furious, and she thinks that Nikki has mistaken her kindness for weakness.

While Nikki is talking to Juan Pablo he mentions that there is some drama in the house, she thinks that Clare told Juan Pablo she has problems with her. Clare actually didn’t say anything about Nikki to Juan Pablo though. Clare confronts Nikki afterward, and tells her that she acts totally different when Juan Pablo is around. Clare thinks that if Nikki was her true self around Juan Pablo she wouldn’t be receiving roses.

Elise and Lauren are officially eliminated from The Bachelor.