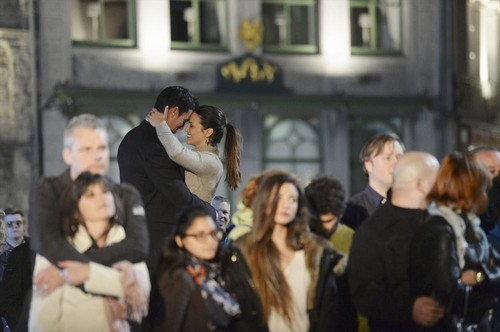 Season 10 of The Bachelorette 2014 is winding down, and on Monday, June 30th Andi Dorfman heads to Belgium where she will hold another rose ceremony and reveal her final four. Spoilers for The Bachelorette tease some pretty cut-throat competition will go down in Belgium, and two guys will be heading home before the episode is over. The final four will accompany Andi Dorfman back to the United States for the coveted hometown dates.

A spoiler video for the June 30th episode of The Bachelorette reveals that one of the guys sneak out of the hotel in the middle of the night to spend some extra time with Andi Dorfman. It looks like Nick Viall stole a page out of Clare Crawley’s playbook and decides to steal some alone time with The Bachelorette behind the other guys’ backs. Considering all of the issues, Nick has had with the other guys when he declared himself a frontrunner, his bold move will most likely blow up in his face and rub some of the other bachelors the wrong way.

So, who will Andi Dorfman send home at the rose ceremony in Belgium? Well, surprise surprise, it’s not Nick Viall. The infamous Bachelor spy and blogger Reality Steve announced months ago that Andi Dorfman’s final four will consist of Josh Murray, Nick Viall, Chris Soules, and Marcus Grodd. So, that means that before they head to hometown dates, Andi will eliminate Dylan Pettit and Brian Osborne in Belgium.

Are you surprised that Nick Viall snuck out of his hotel to visit Andi in the middle of the night, or does nothing that Nick does surprise you anymore? And what about Andi’s Belgium eliminations, do you think she made the right move sending Dylan and Chris home? Let us know what you think in the comments below, and don’t forget to check CDL for all of your Bachelorette spoilers and recaps.