BY Joanna Mazewski on March 3, 2014 | Comments: one comment
Related : Recap, Television, The Blacklist 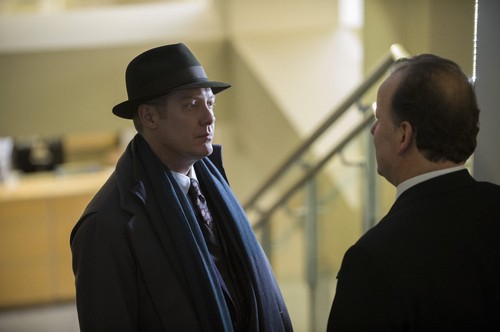 Tonight on NBC their new criminal drama, THE BLACKLIST starring James Spader continues with a new episode called, “The Judge.” On tonight’s show and eye for an eye.  Diane West (“In Treatment”) guest stars.  On the last episode Liz (Megan Boone) helped Tom (Ryan Eggold) came to terms about their impending adoption while Red (James Spader) revealed that a woman from his past, Madeline Pratt (guest star, Jennifer Ehle) was the next target on the Blacklist. Elsewhere, at an elaborate party at the Syrian Embassy, Red convinced Liz to pull off a covert heist. Diego Klattenhoff, Harry Lennix and Parminder Nagra also star.

On tonight’s episode when a prominent Prosecutor is found after being missing for 12 years Red (James Spader) believes that this is the work of Ruth Kipling (guest star, Diane Wiest) also known as “The Judge.” Meanwhile, Red investigates the woman who tempts Tom (Ryan Eggold) while in Orlando at a teacher’s conference. Megan Boone, Diego Klattenhoff, Parminder Nagra and Harry Lennix also star.

Tonight’s show opens with a homeless looking man, he’s named Mark and has been missing for twelve years. Red walks up to a car, he gets inside of it and he talks about his father loving caracals. Red gives the information of Joelyn Parker to a man, he doesn’t want any advice of how to do his job and tells Red not worry. Red says that he loves hats and says that he likes the man’s hat and asks for the size of his head. The man says he’ll find the girl, but Red says he knows where she is, but he wants to know where she has been. Tom is at his teachers meeting, they’re talking about a book and how it’s not right for kids to read a book that has a man who has an affair. Liz is talking to Red, Red tells her that Mark was found on a road in Pennsylvania.

Red is talking about how in mates pass along a piece of paper, then that papers goes to the judge and gives you freedom. Though this judge believes in the saying, an eye for an eye; whatever he grants you he wants the same. Liz briefs to the rest about what Red told her, it seems that here’s an underground federal court going on. Aram finds a man who could be related to the case, for now he’s their lead. Liz and Ressler go to find Frank, they go into the basement to find him. Resseler asks if anyone else knows if Frank lives here, she doesn’t give an answer about the question, but she tells them to wait. Ressler takes a flashlight and continues to explore the basement, seeing tons of books and papers everywhere. Liz calls for Ressler asking if he’s okay, Ressler ends up getting punched in the face by who I assume is Frank.

Forensics arrive to see what happened, it turns out that Frank escaped after punching Ressler in the face. Liz finds information on a man who’s going to be killed soon, due to the fact that something happened during his service in the military. Aram arrives saying that Harold was in the military with that man, they feel that Harold could be in danger. Harold tells her that they can do what they need to do, but he wants to make sure that the man pays for his crimes. Liz walks in to talk to a man in prison, she tells her that she’s not here to reconsider his case. She wants to see if he’s wanting revenge, he says that he wasn’t put in prison out of his free will. That Harold beat him after orders were given by a man named Thomas.

Tom is watching Basket Ball, the woman who’s also a teacher and that he’s been recently getting closer to are at a bar. She asks where Tom’s wife is and if he invited her, he says he did, but she couldn’t make it. Tom and the woman end up making out with each other, a young kid opens the door to find them in the act of it. This breaks up what they were doing, Tom apologizes and she ends up leaving, but then she comes back and gives her room number to him. Now it’s the moment of truth for Tom, will he cheat on his wife Liz? We’ll find out.

Frank knows that the FBI is onto him and he’s not happy, he and a woman walk into the barn. Within the barn is a bunch of people who are in cells of some sort, Frank is looking into the cells and is thinking about being in prison. The woman tells Frank he’s not like the people in the cells, because he’s done nothing wrong and never deserves it. Ressler wants to know if the judge will find Rifkin will be innocent, the man in the prison Liz went to talk to. It looks like that Rifkin could have been put into prions, falsely accused due to his time logs being changed. Liz walks up to speak with Mr. Monson, she wants to know what’s going on. Mr. Monson talks about what’s going on, he ends up telling her what went down that Harold beat Rifkin and that Mr. Monson changed is logs due to them being told he’s a traitor. Harold tells a man that they’re having a problem with Rifkin. The man with the cowboy hat that red was speaking to earlier is now looking around Joelyn’s place, the woman that Tom’s been hanging out with lately. He tells Red about how she was in Prague and is trying to cause some sort of big trouble now.

Liz tells Harold that they need to speak about Rifkin, she asks Harold about beating him and having his logs changed. Harold says he didn’t do anything to an innocent man, but he did beat up Rifkin. The man form the court who is with Harold, tells her that everything is being handled at the court and tells her to be careful. Harold tells her the only career she should be worrying about is her own. Now it’s showing Rifkin and he’s going to be executed as of today, Liz tells Ressler about the recent developments of the case. Rifkin’s final words are that he didn’t do it and that they’re going to be killing an innocent man, Rifkin says goodnight to his mother and he dies. Harold believes they’ve done the right thing, but not in the right way. The man now wants to know what Harold does at his FBI HQ, since they’re taking down people he knows nothing about. He’s interested in Harold’s secret weapon. Harold and the man find cans that have people who are killed in it, the FBI come out of nowhere and arrest them.

Harold is taken by the judge now because of Rifkin, they’ve found out that he was an innocent man. Liz calls Red and tells him that an eye for an eye and that Harold will die like Rifkin did. Rifkin’s mother is pissed off with Harold, asking how Harold and Mr. Monson plead. Mr. Monson pleads not guilty, she says that she finds him guilty, they hear loud noises and they are no taken away. Red finds Richard, he talks to him and asks about how his family is going. Richard’s wife left him, saying that Red had enough information to destroy careers. Red wants to know more about the Rifkin case from Richard, he wants to know if there were choppers at the time everything went down. Mark is being interrogated by Liz, she wants to know where he was held for twelve years because others are being held there. Mark hears a light go off and he says good night mother, though no mother of his is there. Liz then remembers that Rifkin’s last words were good night mother, now Liz has a lead and is headed to Texas. Harold and Mr. Monson are awaiting their sentence, it looks like they’ll be executed also.
[11:00:03 PM] Curtis: Harold is being strapped to an electrocution chair of some sort, Red tells Liz that there’s been a development. The woman who’s known as the mother, finds out that there’s a problem going on. The FBI have found where Harold is being held. Red appears into the underground cells, he sees Harold in the chair. Red sits down with the woman behind everything, he came to sit down to speak to her, he says that she’s been in pursuit in doing what’s right and that she doesn’t want to be wrong the last time. Red gives her files about the Rifkin case, about what happened at the time. Taliban ended up burning a village due to military intelligence, proven that Rifkin was executed not to a beating. Red knows that the woman is second guessing herself, about if she’s doing the right thing at the moment. He knows that she knew that she’d get caught after letting Mark go, after serving his time at the underground prison. Red then walks away after telling her that she’d better be right after killing Harold, the woman ends up surrendering herself to the FBI without killing Harold.

the FBI enter the underground facility and let everyone out of their cells, saving Harold also. Harold tells Liz that he regrets the methods used on Rifkin, Liz says they’ve had enough judgement today. Harold talks to Red, saying that he knows that Red knew what was going to happen. Red says that a war is coming and that things will get worse before they get better, that he wants Harold’s help when the time comes. Red then says he’d like Harold to reach out to Richard because of how helpful he was on the case, he wants Harold to pull a few strings. Red gets into the car with the man he hired in the beginning asking what he found, it looks like Joelyn has been following Red’s every move from the beginning. Red wants to see how Joelyn’s operation plays out in the end. Tom is sitting in the bar looking at his wedding ring, he’s thinking about what to do; he starts walking down a hallway in the hotel. Tom enters the hotel room that Joelyn’s in, she’s glad that he came and the both begin kissing. Tom tells her that he can’t, that’s why he came to her; because he loves his wife. Tom then walks away, Joelyn says wrong answer. Joelyn then says that Liz is not his wife, but Tom’s target. Tom’s attitude changes, he says that he’s supposed to love her because that’s his job.